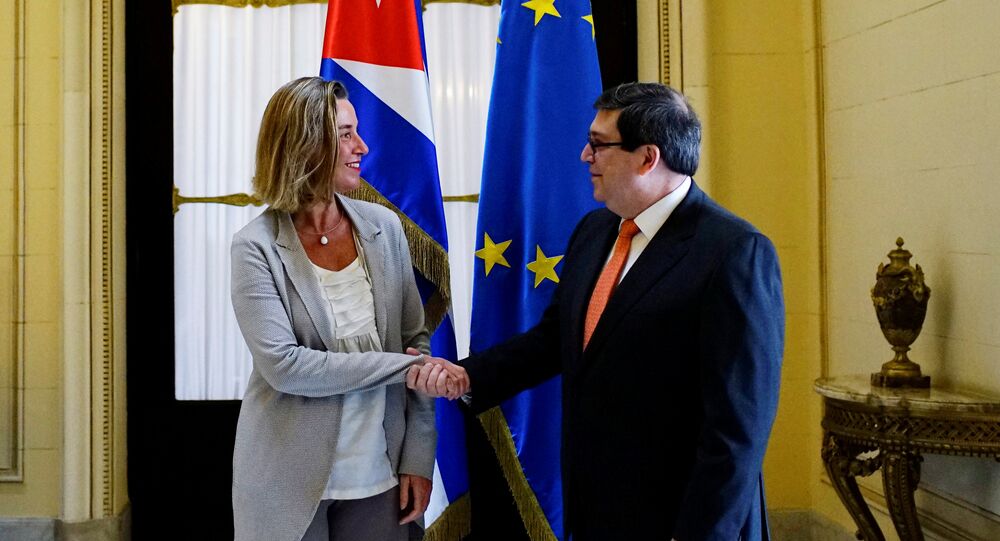 The EU 'Going at Loggerheads' With US Over Cuba – Analyst

EU foreign policy and security chief Federica Mogherini has underscored predictability in the bloc's ties with Cuba. She also reproached the Trump administration for its policy shift on the Latin American country. Speaking to Sputnik, American University professor Fulton Armstrong praised the EU for its resolve "to step in."

Referring to Brussels' intention to develop partnership ties with Havana, Fulton Armstrong, a professor at American University who has held several positions in the United States government concerned with intelligence and policy matters related to Latin America, said that "this is the question of the EU going at loggerheads with the United States over Cuba."

Sputnik: This active engagement between the EU and Cuba… is it to fill the void that has now sort of appeared?

Fulton Armstrong: "This is the question of the United States withdrawing its presence and engagement from Cuba and the EU naturally saying 'if you don't want to engage, we will. I think it would be fair to give the EU leadership some credit for letting the Obama normalization process have a good try. They gave it two years, Trump has signaled he doesn't intend to put energy into normalization so it's natural for the EU to step in."

Sputnik: Doesn't the US have much more to gain as a very close neighbor of Cuba in terms of trade and other influence?

Fulton Armstrong: You are completely right that proximity would argue that we would be the predominant trading partner, we would benefit the most and they would benefit the most because of the obvious proximity between us. There's natural relationship not just by geography, but by culture and history between Americans and Cubans. […] But the State Department has never really concealed the fact that Cuba is predominantly an internal political issue, not a foreign policy issue.

The views expressed in this article are solely those of Fulton Armstrong and do not necessarily reflect the official position of Sputnik.