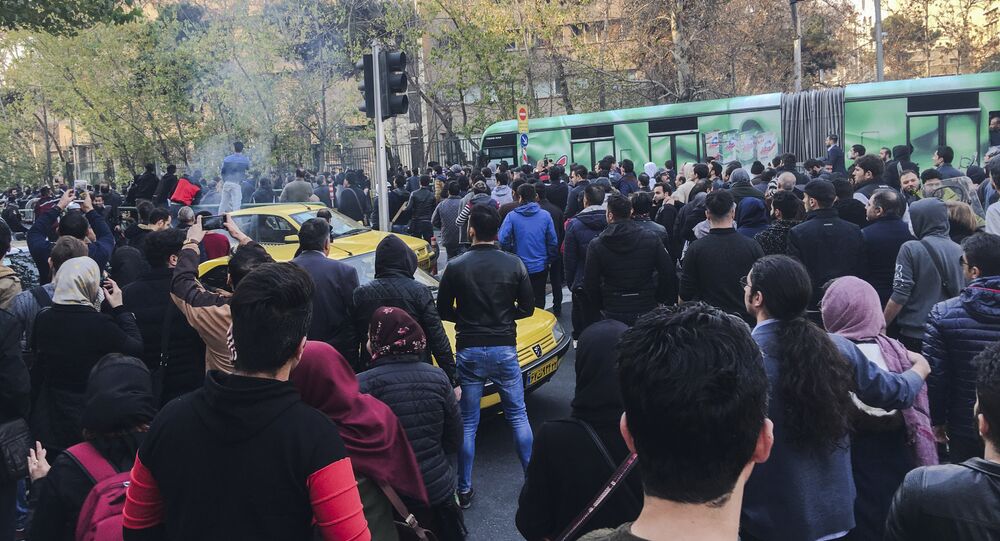 MOSCOW (Sputnik) - A set of anti-government rallies across Iran has almost ended and there is no crisis in the country, however, there is still a possibility that the situation would change and the protests would grow bigger, experts told Sputnik.

Since December 28, Iran has seen popular protests in many cities, including Tehran, Mashhad, Isfahan and Rasht. The demonstrations started in response to a surge in fuel and food prices and high rates of unemployment, inflation and air pollution. At least 20 people have reportedly been killed so far, and 450 people have been detained, according to media reports. Iran’s Interior Minister Abdolreza Rahmani Fazli said that up to 42,000 people had participated in the rallies.

During the protests a number of officials and human rights activists, including German Foreign Minister Sigmar Gabriel and UN Secretary-General Antonio Guterres criticized violent protests and called for respect of the right of people for assembly. US President Donald Trump has also written several Twitter posts about the unrest, warning that the United States is watching the protests, while US Vice President Mike Pence said that the United States was standing with Iranian protesters. Iranian authorities condemned Washington's actions, asking US authorities to focus on the internal issues of their own country.

The protests that kicked off several days ago have almost ended across the nation and the situation is not critical, Mohammad Marandi, a professor at the University of Tehran, told Sputnik.

"I do not think there is a crisis, Tehran is completely quiet, for example. Nothing happened in Tehran, only one time there was a small group of violent rioters… There were just riots that took place in some cities and they have come to an end… It was not pleasant to see the attacks on public property… and the damage that they cause, and the people that they kill but there was not any threat to the country," the professor said.

According to the scholar, the peaceful protesters were different from the rioters and the fact that the protests had turned into riots in several cities was an issue for the police to deal with, while "the population demands that the police put an end to the riots."

© REUTERS / Brendan McDermid
UN Security Council to Hold Emergency Meeting on Iran
At the same time Ahmad Khalid Majidyar, a fellow and the director of the IranObserved Project at the Washington-based Middle East Institute, told Sputnik that the outcome of the protests was hard to predict.

"It is difficult to predict where the current protests will lead to, but there are two likely scenarios: First, the protests will gradually wane in coming days because of a lack of leadership and organization. Reformist political factions and pro-[Iranian President Hassan] Rouhani groups are unwilling to join the protests because they fear that such a path will lead to more repressions and restrictions rather than more freedom and prosperity," Majidyar said.

The scholar said that the scenario of subsiding protests was likely but added that a situation whereby a new wave of rallies would start in Iran was also possible.

"Second, the protests will grow bigger and turn into a national movement threatening the very existence of the Islamic Republic. In such a scenario, the regime will use more repressive measures to clamp down on protesters. Right now, it is mostly the civilian law enforcement forces dealing with the protests; but if the crisis escalates, the Revolutionary Guards will take charge of the security," the representative of the US-based think tank added.

Iranian President Hassan Rouhani said Monday that the unrest had been provoked by a mix of existing internal problems and foreign influence.

The anti-government rallies in Iran have also been widely covered by a number of Western media outlets, such as BBC Persian and the Voice of America Farsi, drawing international attention to the rallies.

Marandi said that the Western media had exaggerated the issue and the protests were not as big as the foreign broadcasters wanted to show. The scholar added that the protests were mostly peaceful, while the attention to them had been attracted by the western media outlets, including by such means as using videos from the riots not in Iran, but from Bahrain or even old clips.

"The Western Persian media outlets, like as BBC Farsi [BBC Persian], and the VoA Farsi, they were doing their best to intensify tensions, to increase tensions, to manufacture crisis to fuel fire to the flames. They were obviously trying to make the situation worse, and… other entities that also placed in the West were also trying to encourage people to attack different public facilities and police stations… Obviously Western governments were deeply involved in this," Marandi added.

Majidyar said that there was no need to look for the reasons behind the tensions in foreign countries, as the protests had been caused by economic difficulties inside Iran.

"Iranian leaders are wrong about painting the protests as a foreign conspiracy. The protesters are ordinary Iranians who want a better life. It will be prudent for the Iranian government to listen to the voices and complaints of the protesters and sincerely try to address their sociopolitical and economic demands," Majidyar said.

Marco Zanni, a member of the European Parliament’s Delegation for relations with Iran, told Sputnik that there was certain external influence behind the anti-government rallies.

"Due to the timing and the recent pressure on the Iranian government made by the international community leaded by the USA, I suspect that behind this wave of protest there is some external influence … there is no clear leadership or charismatic leaders representing the protester. That’s another point in favor of the external-influence hypothesis," Zanni said.

The EU lawmaker added that yet another external issue that had fueled the protests was the renewal of sanctions against Tehran that had a negative effect on both the country’s economy and nation.

© AP Photo /
Former DHS Undersecretary Calls for US to Arm Iran Protesters With IEDs
Speaking about the potential ways out of the crisis, Zanni said that the European countries should exert more efforts to find a peaceful resolution to it and proposed to lift the sanctions in order to support the Iranian economy.

"European countries should take the lead of a peaceful resolution of the crisis lifting all the sanctions against Iran and putting pressure to the US government to do the same. Lifting of the sanctions is the only way to allow President Rouhani government to continue to improve Iranian economical and social conditions," the EU lawmaker added.

According to Majidyar, who considers that the protests have not been caused by foreign influence, the economy is behind the civil unrest in Iran.

"Economic grievances are the main driver of the current protests. While Iran’s economy has improved since Tehran signed the nuclear agreement with world powers, much of the foreign investment in Iran has been in the energy sector and has not benefited ordinary Iranians. Youth unemployment in Iran is nearly 40 percent and inflation is rising again," the representative of the US-based institution added.

The scholar added that Washington would continue exerting efforts to put pressure on the Iranian institutions, such as the Islamic Revolutionary Guard Corps, and would look for support of the European countries in introduction of sanctions against Tehran.

The views and opinions expressed by Mohammad Marandi, Ahmad Khalid Majidyar and Marco Zanni are those of the speakers and do not necessarily reflect those of Sputnik.

Iranian Interior Minister Reveals Number of Protesters: 'Not Too Much'