As Austria's new right-wing government takes office, editor-in-chief of the Austrian magazine "Frank & Frei" Werner Reichel tells Sputnik Deutschland why the left is going through a period of unpopularity in the Alpine nation.

Not one but two crucial elections took place in Austria over the past 12 months, Werner Reichel, the editor of Viennese economic, political and lifestyle magazine "Frank & Frei," [free and frank] reminded Sputnik Deutschland.

"The presidential election [December 4, 2016] was a very narrow victory for the left, in which all the forces of the left with the help of the media, the churches etc., supported [Alexander] Van der Bellen and this was celebrated as a great victory. Since then, the public has obviously had a rethink and the second, more important parliamentary election [October 15, 2017] has resulted in a great victory of the bourgeois-right parties, the Austrian People's Party (OVP) and Freedom Party of Austria (FPO), led by Sebastian Kurz and Heinz-Christian Strache."

"Time will tell what they make of it [the opportunity to govern]," Reichel told Sputnik.

© REUTERS / Heinz-Peter Bader
Presidential election campaign posters of Alexander Van der Bellen, who is supported by the Greens, reading "Vote! Don't be surprised." and of Norbert Hofer of the FPOe, reading "For Austria with heart and soul", are seen in Vienna, Austria, November 24, 2016.

According to the publisher of "Frank & Frei," Christian Guenther, the victory showed that a conservative majority is possible in Austria.

"The question is whether the state has reached its limits in the social, educational and budgetary areas and how the new government can deal with that, whether it will even be able to bring the state back in order."

In his view, the new coalition faces a tough task to ensure that "older people will receive their pensions and that the education system will be revamped. The worst thing is that currently about 25 percent of all those leaving compulsory education cannot read properly and are in reality illiterate. It's a very difficult situation and there are many things to be done."

The front page of the latest issue of "Frank & Frei" bears pictures of Angela Merkel among others and reads: "Bad cards. How Europe is gambling away its future." 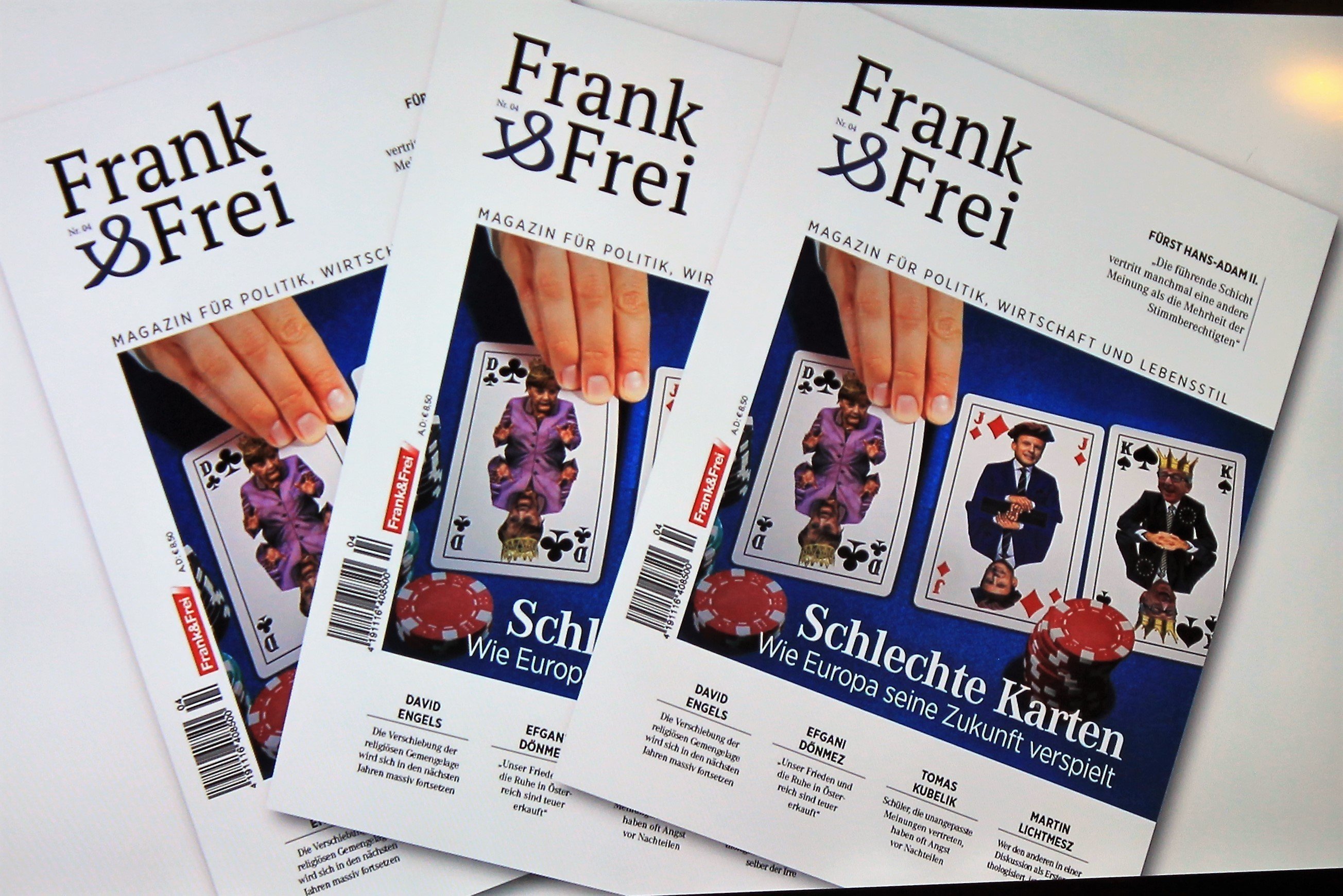 © Sputnik / Nikolaj Jolkin
The front page of Frank&Frei
"Germany is in a political crisis, the coalition negotiations drag on. With her 'welcome culture,' Angela Merkel has brought a huge number of poor migrants to Germany, so these problems are starting to explode. There are currently no viable strategies or solutions that can be done to stop it, instead they are trying to carry on as before and that leads Germany, as the engine of Europe, ever further into the abyss," editor-in-chief Reichel said.

A difference between Austrians and Germans

Christian Guenther explains the difference between Austrians and Germans, with regard to the migration issue:

"The Austrians are far from ready to let a 'welcome culture' be imposed on them from above. There is relatively large resistance to it, as well as the success of the Freedom Party in Austria, which provides a kind of valve, similar to Alternative for Germany (AfD). As a recognized democratic party, the FPO has its own immigration policy and warned of such a situation years ago. Now, of course, they are the ones who have the most competence in this situation, with regard to the issue of mass migration." 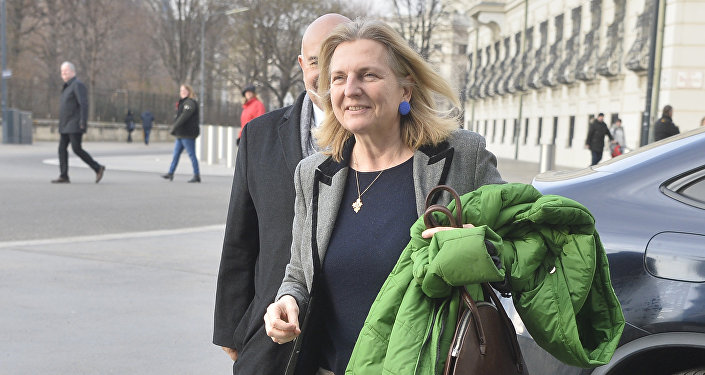 © AFP 2019 / HERBERT PFARRHOFER / APA
'Well-Known EU Critic': Meet Karin Kneissl, Austria's Future FM
According to Guenther, the consequence of open borders and mass immigration is "an overstretched welfare state, in which costs skyrocket and Austria's standard of living suffers. Of course, besides finance, there are a lot of problems with decrepit structures. It is now time to wait and see how the new government will act, whether it will bring about major reforms and also work against the EU, whether it dares to do so."

"When it voted to join the EU in 1994, Austria was very enthusiastic. It was a big agreement. However, things have changed in the meantime. At that time, more than 60 percent of people were in favor, but now that figure is said to be below 30 percent, mainly because the EU has turned out to be toothless on the real questions. The EU is failing when it comes to mass migration and the protection of its external borders, but small-scale it regulates very strictly, and that, of course, upsets the Austrians."

Although Austrians are reluctant to accept intervention by the authorities in daily life, they are relatively comfortable with some other aspects, Guenther explains.

"He [an Austrian] says that while the EU decrees the shape of cucumbers or tractor seats, it doesn't care about immigration. The Austrians, if they can be so characterized, take a long time to rebel. However, they are consistent in rebellion. Once they have made a decision, it's very hard to get them to change their minds."

The 2018 Presidential Elections in Russia

Reichel believes that the possible re-election of Vladimir Putin would be a good decision for Europe, and considers "Russia bashing" to be counterproductive. "Europe and Russia need good and close relations, there's no question of that at all."

His colleague Guenther thinks that the era of Europe's orientation to the Anglo-American world is at an end.

"In other words, a Putin that represents a strong Russia, where economic cooperation is possible and where there are no political sanctions, would certainly be better for Europe than an Anglo-American sphere of influence that permeate even the smallest areas." 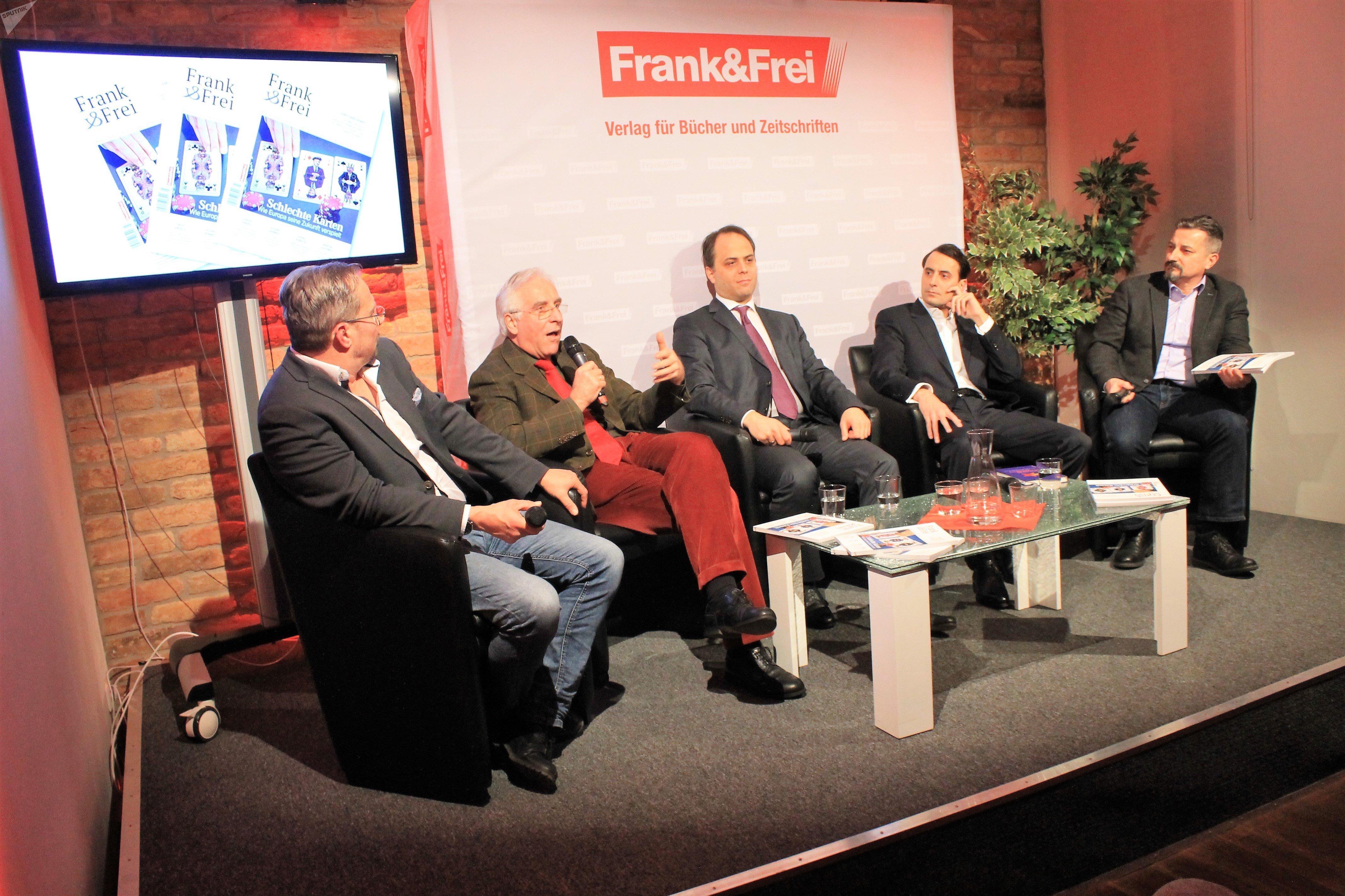 © Sputnik / Nikolaj Jolkin
Discussion with the editors of Frank&Frei
The quarterly magazine "Frank&Frei" was published for the first time last year. The magazine sees itself as a medium for quality writing and freedom of expression, offering a sober analysis of the current processes in Europe. The latest issue addresses those developments that have brought down the left in Austria and across Europe.

The focus is on the consequences for Europe of uncontrolled mass immigration from Islamic countries. In the introduction, Christian Guenther writes that the Geneva Convention, the right to asylum and the process of gaining recognized refugee status date back to the mid-20th century, and are now being exploited by various interest groups. He calls on politicians to take measures to mitigate the negative impact of immigration on wages and public finances.

The views and opinions expressed by Werner Reichel and Christian Guenther are those of the commentator and do not necessarily reflect those of Sputnik.