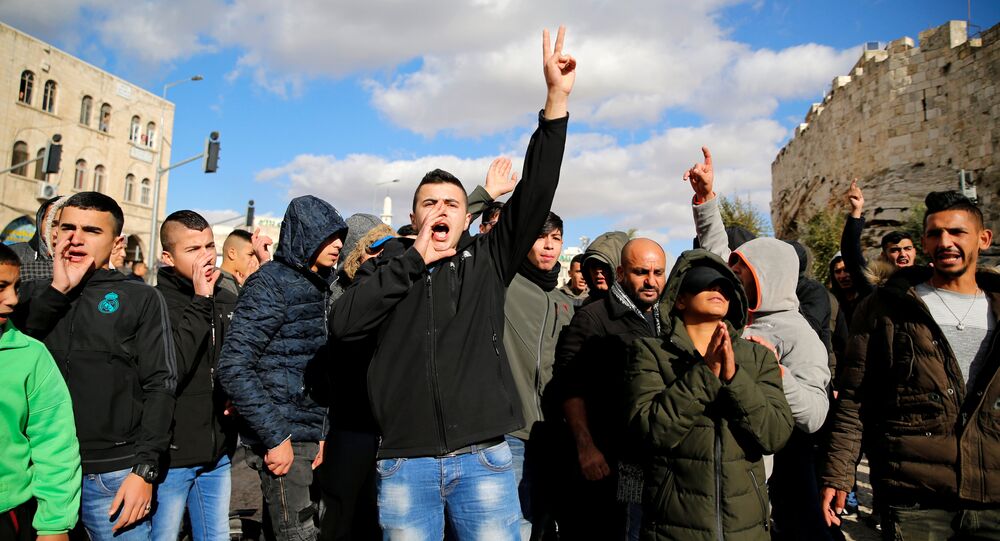 WASHINGTON (Sputnik) - US President Donald Trump is going to learn that the Palestinian people cannot be bribed to abandon their historic ties to the holy city of Jerusalem, the Reverend Dr. Mitri Raheb, pastor of the Evangelical Lutheran Christmas Church in Bethlehem told Sputnik.

"It seems that President Trump thinks only as a businessman believing that everything is for sale and with money you can buy anything," Raheb, who is also president of Dar al-Kalima University College of Arts and Culture, said, adding "but Jerusalem is not for sale."

© AP Photo / Ariel Schalit
Guatemala to Relocate Its Embassy in Israel Following US Jerusalem Stunt
Every major US ally in Western Europe, the Middle East and Northeast Asia voted against the decision.

Raheb warned that the US prestige and "soft power" would be seriously damaged by Trump’s decision, which has provoked strong criticism around the world.

"While the ‘hard power’ of the United States will not be affected, the ‘soft power’ is," he said.

The historic US position of supporting democracy and related values around the world would be tarnished by the Jerusalem embassy controversy, Raheb pointed out.

Threats by Trump and US Ambassador to the UN Nikki Haley to financially punish nations that condemned the move in the UN General Assembly vote last week could only backfire and hurt the image of the United States while embarrassing its supporters, Raheb cautioned.

"The move of this administration by bullying and blackmailing the international community is damaging the image of the US not only abroad but is making many of my American friends feeling embarrassed to say the least," he said.

Trump’s move had also served to increase his isolation within his own administration and on the US domestic political spectrum, Raheb observed.

"With this logic of a businessman, the president might use US funds to reward or punish small countries, but thank God that he doesn’t represent the whole of the United States of America, not even the whole administration," he said.

Raheb expressed confidence that Trump’s decision to move the embassy would be widely criticized within the United States.

"There are other voices in the United States that stick to reason, to international law and human rights," he said.

Last week, the UN General Assembly defied massive US diplomatic pressure and threats of major cuts in US aid to many nations and voted by a margin of 128 nations to nine to condemn the planned move.

© REUTERS / Francois Lenoir
Israel in Talks With Several States on Embassy Transfer to Jerusalem - Netanyahu
Apart from Israel, only seven other countries, four of them tiny Pacific islands, backed the United States.

On December 18, 14 out of the 15 members of the UN Security Council voted for another resolution condemning the decision by the United States to move its embassy in Israel to Jerusalem.

However, Washington then used its veto power as a one of the five permanent members of the UN Security Council to block the resolution being passed.

Raheb’s books include "Faith in the Face of Empire: The Bible through Palestinian Eyes," "Bethlehem Besieged" and "I Am a Palestinian Christian."

The views and opinions expressed by Reverend Dr. Mitri Raheb are those of the speaker and do not necessarily reflect those of Sputnik.