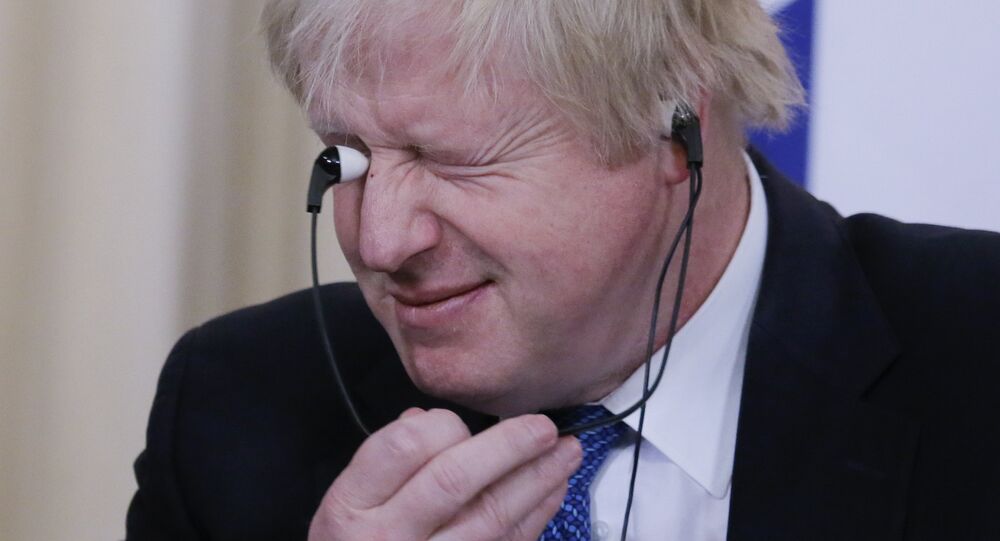 The UK’s foreign secretary, Boris Johnson, met with his Russian counterpart, Sergei Lavrov, on Friday, during the first visit by a British top diplomat to Russia in more than five years. Despite indicating possible areas for cooperation, the talks did not result in any kind of thaw between London and Moscow.

Boris Johnson, who assumed office in 2016, had to cancel his visit to the Russian capital twice. Most notoriously, in April 2017 Johnson's scheduled jaunt was called off following a series of US airstrikes against a Syrian government air base. Despite the fact that the visit was much anticipated by both sides, it looks like Johnson couldn’t offer anything substantial to resolve the conflicting bilateral issues and move towards normalization.

Johnson’s visit to Moscow came at a time when London made important steps in negotiating with Brussels the terms of its withdrawal from the European Union. This may be one of the possible reasons behind the attempt by pro-Brexit Johnson to repair ties with Moscow, according to international affairs commentator Marko Gasic.

Gasic pointed out that leaving such a major international bloc as the EU means looking for new partners. His assumption was echoed by Doctor Ben Williams, a tutor in politics and political theory with the University of Salford. Williams pointed to the benefits both Russia and the UK could gain from increasing trade cooperation after Brexit.

"Britain is in the process of Brexit … and is looking to build relations more broadly. Russia is an obvious candidate because of its size and influence," Williams told Sputnik. "Russia is one of the growing economies. Russia has the market potential for Britain as a trading partner."

During a press conference in Moscow, the British minister looked quite friendly, having even joked that he had handed his coat with "everything that was in my pockets" to his Russian counterpart Sergei Lavrov. There is "every reason to build trust now," he told journalists, referring to a warning not to drink Russian vodka, not to try local food and leave his mobile phone at home, which was made one British lawmaker prior to the visit.

"I can say that there was nothing in Boris's coat pockets," Lavrov said in reply to Johnson, and both diplomats laughed, setting a playful tone for the whole press conference.

Johnson stressed that Russia and Britain should still "work together for peace and security" and have "substantial interests in common," but real cooperation between the two countries remain hardly possible, as London does not seem to be ready for concessions on any of the problems that have been complicating its relations with Russia in recent years.

© REUTERS / Khalil Ashawi
Watchdog Slams UK Over Revelations of Controversial Financial Aid to Syria
The Syrian crisis continues to remain one of the thorniest issues between London and Moscow. During the press conference on Friday, Johnson, however, did not indicate any moves that could help overcome the differences between the UK and Russia over Syria.

As for the North Korean crisis, there are also serious differences between Russia and the UK.

"We share the same objectives, which is to make sure that there is peace and stability in the Korean peninsula, indeed that it is a de-nuclearized Korea. We do, neither of us want to see North Korea armed with ICBMs [intercontinental ballistic missiles]," Johnson said in Moscow.

International affairs commentator Gasic, however, expressed doubt that Moscow and London would be able to successfully cooperate on North Korea due to the United States.

As a NATO member and one of the key military allies of the US, the UK cannot go against Washington’s policy on the North Korean crisis, an approach that, in particular, does not rule out the military option to settle the issue. In October, Johnson said that it was the US president's "duty at least to explore those military options and keep them on the table." At the same time, Russia has repeatedly called to resolve the crisis diplomatically, including the so-called "double-freeze" plan it has proposed together with China.

While the US refuses to give security guarantees to North Korea, including continuing military drills near the Korean Peninsula and rejecting diplomacy, "there’s nothing really Britain can do about it, not even Boris Johnson," the analyst told Radio Sputnik.

As the cherry on top, London’s allegations of Russian meddling into the Brexit vote and election were discussed. Commenting on the issue, Johnson and Lavrov exchanged barbs at the press conference. Lavrov recalled Johnson’s recent statement that there was "no evidence of Russian interference in the Brexit referendum."

"Not successfully," Johnson responded, making clear that London still believes such attempts took place. This remark prompted Lavrov to respond that his British counterpart tries to safeguard "his reputation." "It's your reputation I'm worried about, Sergei," Johnson hit back.

Commenting on the issue, international affairs commentator Marko Gasic told Radio Sputnik that Johnson "is not giving any facts" because he "doesn’t actually have any facts."

"More to the point, Boris knows he doesn’t have any facts because if you listen to what he actually said, he isn’t quite claiming that the Russians definitely interfered in the referendum or the elections. As he said Russian efforts to interfere … 'whatever they may have been, they've not been successful,'" Gasic told Sputnik, suggesting Johnson knew that he was not giving anything to back up those claims because he was trying to "appease the neo-con lobby by sounding like he’s accusing Russia."

Slight contradictions remain on the issue though. Lavrov urged the UK not to create "artificial restrictions" for cooperation with Russia in this field. In turn, Johnson noted that London and Moscow continue to work together on fighting against terrorism "at an important level," despite the existing bilateral differences.