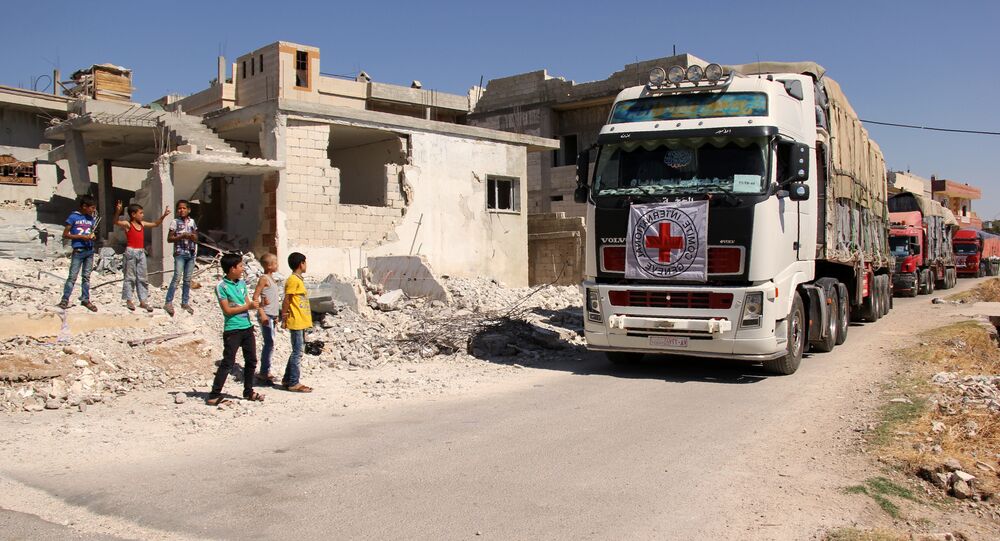 Bernd Duschner, chairman of Friendship With Valievo, an association which collects donations for humanitarian relief parcels for Syria, told Sputnik that the sanctions imposed by Western countries against the Syrian government have caused more damage and suffering than the war itself.

Friendship With Valievo, originally created in 1999 to send aid to the Serbian town of Valjevo following its heavy bombardment by NATO, is busy at work collecting donations for winter clothes for Syria's children.

66-year-old Duschner, a resident of the town of Pfaffenhofen an der Ilm in Bavaria, made contacts in Syria three years ago, and the first fundraising campaign was held to help pay for an operation of a Damascus boy in a German hospital shortly thereafter.

© Sputnik / Mikhail Voskresenskiy
An employee in the corridor of Assad Hospital in Deir ez-Zor, Syria.

After that, the Friendship With Valievo association collected donations for the purchase of a water purification system for dialysis at the so-called Italian hospital in Damascus. The money was donated to the nuns through Lebanon, since European sanctions have restricted  financial transactions with Syria directly.

In an interview with Sputnik Deutschland, Duschner stressed that medicines, medical equipment, spare parts and other key supplies have become practically inaccessible to Syrian hospitals due to Western financial and economic sanctions.

In fact, according to the charity head, the German government's 2011 decision to impose sanctions against Syria helped to precipitate the war in the country in the first place. "In our view, these were preparations for the war, because sanctions paralyze a country's economy, create massive unemployment and dramatically worsen the situation for the population. This, in turn, exacerbates social and ethnic conflicts and drives the country into a state of civil war."

© AFP 2021 / Tauseef MUSTAFA
A Syrian woman holds a sign calling for the arming of rebels as civilians and Free Syrian Army members march during a protest against the Syrian government in the northern city of Aleppo on October 5, 2012

In addition to initiatives in the field of medicine, Friendship With Valievo has engaged in other work, including job training for Syrian women, which has helped 40 women to get an education in tailoring, a profession that's in demand. Money collected also helped with the purchase of sewing machines.

"The word 'Syria' is still key," Duschner noted. "Upon hearing it, people spontaneously organize assistance, including in Germany. However, for us, it is important not only to provide humanitarian assistance. We also consider ourselves a group for peace. By our actions, we want to point out the catastrophic impact that sanctions have."

Between 2010 and 2014, unemployment in Syria rose from 15 to 58%. At the same time, GNP dropped four-fold, with six out of ten Syrians driven into poverty, and nine million requiring humanitarian food aid. Sanctions, the activist noted, have caused famines and epidemics, and other forms of suffering from a lack of food and medicines. Even Syrians living abroad have no easy way to send money home to their relatives.

According to the aid group's head, "it is estimated that in the six year war in Syria, more people died from the lack of medical care than from the war itself."

At the same time, Duschner is less than convinced of the humanitarian motives presented by Chancellor Angela Merkel's government when it opened Germany up to Syrian refugees. The Merkel government's key aim was creating more opportunities for companies on the labor market, not helping Syrians, he believes. Moreover, he said, it was Syria's middle class, which had the financial resources needed to make the treacherous journey to Europe, that left the country, while the poorest Syrians were left behind. Back in Syria, the loss of specialists and potential conscripts for the army further weakened the country, he said. This included major problems caused by the loss of many of Syria's doctors.

© AFP 2021
German Chancellor Angela Merkel talks with refugee children at a preschool, during a visit to a refugee camp on April 23, 2016 on the Turkish-Syrian border in Gaziantep

It was only after Russia's intervention in the conflict, and Syria's gradual stabilization thereafter, that the German government gradually began to curb its intake of Syrian refugees, the activist pointed out.

Friendship With Valievo is now busy collecting donations for a new project, seeking to provide the Syrian women trained in tailoring with skills to sew children's winter clothes. This is crucial, he said, given Syria's cold winters, and the lack of gas and electrical supplies faced by many of the country's cities as a result of the long and destructive conflict.

The first part of the donations have already been transferred, and the first batch of children's clothes has been sewn, Sister Carol from the Italian hospital in Damascus told Duschner.

The charity head showed Sputnik a copy of the letter, which reads as follows:

"Dear Mr. Duschner, I'm writing to you to thank you for the support you have given us. We have received 16,000 euros. A thousand thank yous!…The women who have received their wages are very happy, and not only them, but the poor who have received Christmas presents as well. Thank you and all your donors. Sister Carol."