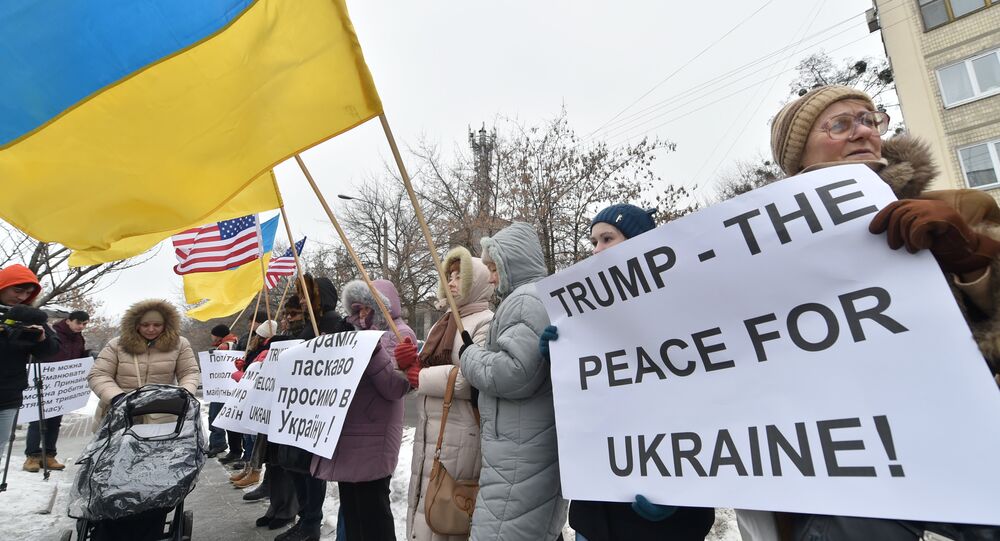 War & No Peace: US Cuts Kiev Off From Preferential Trade, Gives Go-ahead on Arms

In a move that hardly seems coincidental, Washington made two announcements Friday which seem to outline its foreign policy priorities in Ukraine. Approving the supply of lethal weapons to the country, Washington threatened to partially suspend Kiev's trade preferences with the US. Sputnik considers what may be behind the seemingly incoherent move.

Following months of internal debate, the State Department announced Friday that the US has "decided to provide Ukraine enhanced defensive capabilities" aimed at building up Kiev's "defense capacity." The move follows reports from earlier this week that the State Department had approved export licenses for the commercial sale of small parties of weapons to the instability-wracked country by US arms makers.

Also Friday, the US Trade Representative's Office announced that President Trump would partially suspend Ukraine's benefits under a US preferential trade program in 120 days unless the country makes major steps to better protect intellectual property rights. Kiev, according to the US trade office, has "failed" to adequately protect intellectual property, "despite years of encouragement and assistance from the US government."

© AP Photo / Efrem Lukatsky
'Entirely Defensive in Nature': US Agrees to Provide Lethal Aid to Ukraine
Trade officials did not clarify which part of the US Generalized System of Preferences agreement Ukraine would be nixed from, but the tendency seems clear: Washington is cutting out its economic support for Kiev, all the while upping its military assistance to the country, as tensions in the frozen Donbass conflict continue to smolder.

President Trump's economic nationalist approach to foreign policy hit Kiev particularly hard. Earlier this year, administration plans on US foreign aid for fiscal year 2018 leaked to US media outlined a whopping 68.8% cut in assistance to Ukraine. Ukraine's Embassy in Washington quibbled over the scale of the cut, saying the proposal is really "around 30%." At the same time, the Trump administration enthusiastically approved Kiev's decision to buy US thermal coal, despite its price being almost double that which Ukraine would pay for the heating source from nearby Donbass or Russia.

At the same time, the US president has had considerably more difficulty challenging the neoconservative agenda on US Ukraine policy. Trump's campaign promises of curbing US involvement overseas and trying to work together with Moscow on global issue, including the Ukraine conflict, haven't panned out. Possibly under pressure from Congress and the US bureaucratic apparatus, Trump appointed John McCain ally Kurt Volker as the US's special envoy to Ukraine. Making several trips to the country, Volker immediately began accusing Russia of engaging in 'hybrid warfare' in Ukraine's breakaway Donbass region, and has pushed aggressively for a more active US policy vis-à-vis Kiev, including through the supply of lethal weapons to the country.

This past week, Volker warned that the situation in eastern Ukraine has significantly deteriorated, and even suggested that 2017 has become the "deadliest year" since the civil war began in 2014. Volker accused 'Russian-backed forces' of escalating the conflict.

© Sputnik / Vitaly Podvitski
Fanning the Flames
Volker's comments were echoed by the State Department on Tuesday, with spokesperson Heather Nauert openly accusing "Russia and its proxies" of being "the source of violence in eastern Ukraine," and alleging that Moscow "continues to perpetuate an active conflict and humanitarian crisis" in the region. Nauert denied any possibility that the Donbass militia were "organic" entities which sprang up to resist Kiev in the months following the Maidan coup d'état in the Ukrainian capital in February 2014.

Earlier this month, Russian Foreign Minister Sergei Lavrov and US Secretary of State Rex Tillerson met to discuss global hot spots, including Ukraine. Lavrov stuck firmly to the position Moscow has held since the signing of the Minsk accords in February 2015, stressing that the accords must be implemented, and arguing that Kiev has played the key role in stalling this process.

Cause for Dangerous Escalation

© Sputnik / Irina Gerashchenko
Massive Increase in Truce Breaches in Donbass an Alarming Sign - EU Envoy
As far as US arms deliveries to Ukraine are concerned, Russia has vocally objected to the idea, and cautioned that the move would only threaten escalate the conflict. Earlier this year, President Vladimir Putin stressed that although the delivery of lethal weapons was a "sovereign decision of the United States" which Moscow could not stop, "the supply of weapons to the conflict zone is not beneficial to the peacekeeping process, and only exacerbates the situation. If this occurs, this action will not change the [strategic] situation…But the number of victims may certainly increase."

With these issues in mind, reaction from Moscow over Washington's Friday announcement has been highly critical. Deputy Foreign Minister Grigory Karasin told RIA Novosti that the arms deliveries threaten to disrupt the peace process and hamper the implementation of the Minsk accords. Deputy Foreign Minister Sergei Rybakov echoed his colleague, saying that in the present situation the US in Ukraine looks "less like an intermediary and more like an accomplice in fueling the war." Finally, Senator Franz Klintsevich, a senior member of the Senate's security committee, warned that US weapons will encourage Kiev to use force. "The Americans, in essence, are directly pushing Ukraine's military toward war," he said.

With Ukraine recently approving a whopping 14.8% increase in its defense spending for the 2018 fiscal year, Washington's decision to provide the country with lethal weapons is a worrying development. However, facing growing political instability at home, including a slew of street protests in the capital and more and more calls for the country's government to resign, it's unclear whether Kiev will dare to try to fulfill its dream of pacifying the Donbass by force.

© Photo : President of the Ukraine Press-Service
Ukrainian President Petro Poroshenko, left, and US President Donald Trump during their meeting