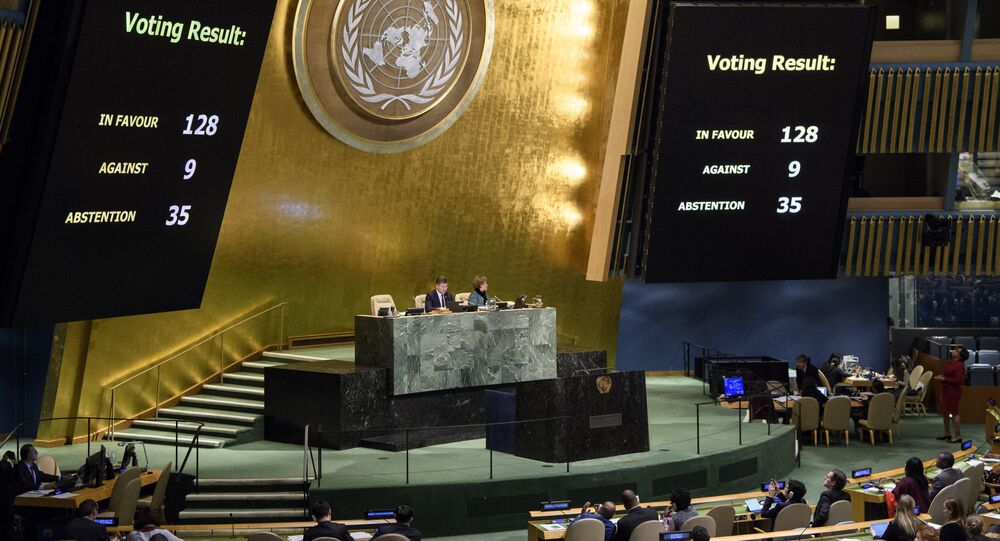 Commenting on Donald Trump's threats to slash funding to countries ahead of a UN vote on Jerusalem, Turkish political commentator Oya Akgonenc Mugisuddin told Sputnik that it can be seen as nothing but the US President's financial ultimatum.

"They [the US] have delivered an ultimatum to the voting countries: either you unconditionally support our unilateral decision [on Jerusalem] or we will slap sanctions against you," Mugisuddin said.

She added that the decision on whether to render assistance to any country unilaterally depends entirely "on the choice of the United States."

"At the same time, it is important to note that similar behavior of the US Administration […] indicates that Trump, who accentuates the slogan 'America first, uses this [UN General Assembly] vote as a pretext to stop assistance to other countries,  something that he has already been mulling for some time," Mugisuddin emphasized.

She also pointed out that the countries, which voted against the US decision on Jerusalem and which united in line with the rule of law, found themselves "in a winning position, given that threats and pressure from the US will continue."

© AFP 2021 / EDUARDO MUNOZ ALVAREZ
Palestinian Foreign Minister Riyad al-Malki addresses to members of delegations at the General Assembly for the vote on Jerusalem, on December 21, 2017, at UN Headquarters in New York

Earlier this week, Trump said that that he is keeping a watchful eye on the way countries vote in the UN Security Council and General Assembly.

On Thursday, the UN General Assembly (UNGA) approved a resolution rejecting Trump's recognition of Jerusalem as the capital of Israel after 128 member states voted in favor of the measure.

This was preceded by the US veto of a UN Security Council resolution which urged Trump to reverse his decision on Jerusalem; 14 other states supported the document, which was drafted by Egypt.

The US President announced his declaration on Jerusalem, provoking an international uproar and prompting the Palestinian militant group Hamas to declare the Third Intifada.

The views and opinions expressed by Oya Akgonenc Mugisuddin are those of the analyst and do not necessarily reflect those of Sputnik.