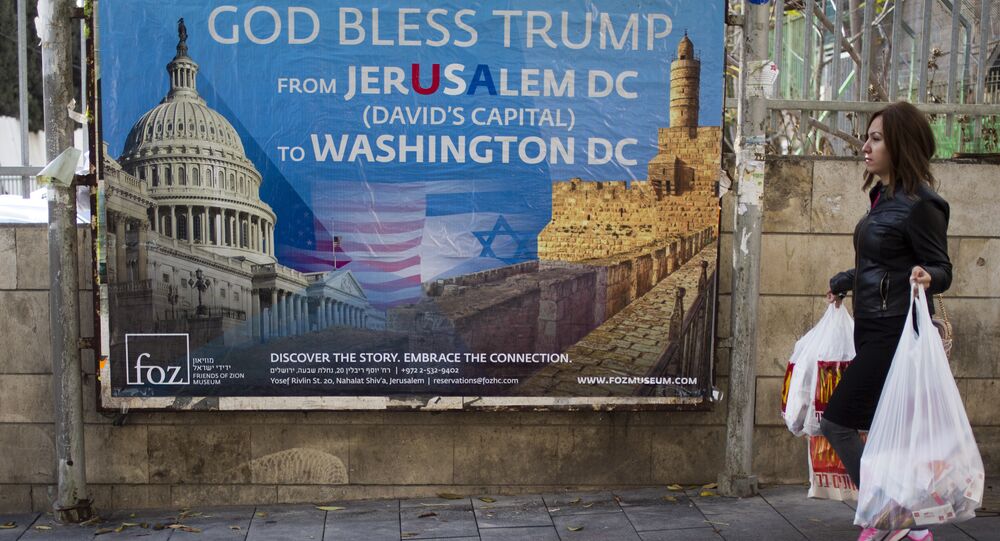 The UN General Assembly prepares to vote on the United States’ decision to recognize Jerusalem as the capital of Israel. Dr. Emran El-Badawi, program director and associate professor of Middle Eastern Studies at the University of Houston, spoke to Radio Sputnik about this issue.

Sputnik: What are Washington’s reasons for not just vetoing the UN resolution that would be pretty much in keeping with the move by the Trump administration to recognize Jerusalem as the capital of Israel? But why has the US administration really reversed their traditional position on Jerusalem at this point in time?

Dr. Emran El-Badawi: There are a couple of theories as to why the US and specifically the Trump administration has chosen to formally recognize Jerusalem as the capital of the state of Israel. The typically American Presidents Obama, Bush, other administrations have taken up positions of you know, we will decide later, or that we can kind of half agree that Jerusalem is capital of Israel but we can’t formally recognize that. And some of the reasons include, as we should recalled that Jared Kushner the president’s son-in-law was charged with bringing peace to the Middle East, a kind of impossible goal for someone who has no qualification. Jared Kushner himself and much of the administration are under the Russia-gate court investigation which makes that a kind of an impossibility.

The other thing is of course that Trump himself, his own personality, one of blowing up the system, moving mountains with his bare hands, grabbing the bull by its horns, just affecting change by dictate and third factor would be that it’s been quite a while now since any sort of movement happened in the Middle East and the Trump’s base, that is the Evangelical base, the Christian fundamentalist base, certainly their sort of pressure, their aspirations even the right-wing Christians, even right-wing Jews, Zionists in the US, would have applied pressure in a consummate manner that had affected presidents throughout recent American history and I think all these factors came to bare their fruit in this, rather, iconoclastic decision.

Trump’s visit to Saudi Arabia, to Israel, and even his visit to Russia, those were absolutely critical visits that dictate the very future of the region in various parts of the world. There is actually, I think, a bit of a plan. The idea that Trump has no plan is not probably true. There is a plan, and the plan includes Jerusalem for the state of Israel. The two-state solution is either being postponed or is completely off the table. There cannot be a two-state solution. The state of Israel and the illegal Jewish settlements have effectively taken over all of the land in the Gaza Strip. There is simply no sort of habitable land that can be constructed upon. It’s been bombed to smithereens every couple of years. What you have is really nothing but a de facto one state, that’s actually the reality on the ground. Both sides need to take that into consideration. What Trump has done is gone right to the conclusion; he goes right into the city of Jerusalem and declares unilaterally it belongs to one side. It does sabotage the entire initiative.

Everything is so unprecedented with this administration. If Trump chooses to bring peace into the Middle East and make a deal, the only deal that could be made at this point is a one-state solution."

Sputnik: If he does decide to go for this one-state solution, how do you see that playing out? Will that be acceptable to the Palestinian people?

Dr. Emran El-Badawi: There is no way to really kind of evacuate hundreds of thousands or up to a million Israeli settlers out of the West Bank. There is no way to rebuild Gaza; there is no way to really bring political stability to the city of Jerusalem and the state of Israel itself, unless you have a one-state solution. The idea is first to plan out, to map out what is a one-state solution, but that is Trump’s style right, it’s not to tell anybody anything and just jump into it right to the end. If administration does map it out it could do some good.

There is no indication that Trump himself or his administrators would do such a thing. It can really, finally bring peace to the longest running conflict in modern history. There is no two-state solution: you have two ethnic populations that are kind of fighting each other to the death. The status quo is unsustainable so you have to change something. You can’t blow up the system but you need to change something. The only change that one can think of is actually a one-state solution. It is a small piece of land the size of New Jersey: you can’t split up something that small. Two populations who hate each other, to draw a line saying this is mine and that is yours, when they both claim the whole thing.

If people aren’t actually at the negotiation table, they are fundamentally at war with each other. There is no other alternative. Those negotiations need to take place. The subject of Palestinian homes being demolished and rebuild is one that is being negotiated or perpetrated irrespective of one state or two states.

If you look at the countries such as Egypt and Tunisia, Libya and Syria, etc., there are various populations in there, whether you look at Kurds, for example, the really big one, or other sort of Christian minorities, populations which live under a sovereign umbrella, which is not immediately there, they enjoy the rights and they enjoy the sort of lifestyle and safety that their neighbors enjoy, and so long as they enjoy the ability to go to their job, sent their kids to school and get married, there is no problem.

That is the language that we should be speaking in this conflict as well. How can we rectify, how can we re-franchise both Palestinians and Jews, how can we sort of find an equitable solution to a very long running conflict. It’s not going to be easy, it is probably the most difficult deal that any president would have to sort of charge and make.

Sputnik: Do you think that the United States at this point is in any position to broker or facilitate a deal between a one-state or two-state deal between Palestine and Israel now that they have basically identified themselves as some would say inherently biased toward Israel by this declaration on the status of Jerusalem?

Dr. Emran El-Badawi: That is also a significant problem and I think that the Trump administration really burned a very important card he had for choosing a kind of credibility with respect to the question on peace in the Middle East.

The United States has historically not been viewed internationally as an equitable broker of peace in the Middle East, especially looking at the Israel-Palestine conflict. Obviously it sends over a billion in military aid to Israel, it gives it sort of logistical support and moral support, political support. Israel has a very important sort of lobbying power here in the US. There are number of reasons that the US does reside on the side of Israel; there are glimmers of hope of course with the Camp David Accord and the Oslo Accord in the 70’s and 90’s but other than those rays of light there is really been no position that the US has taken which can be viewed as, “Oh they are an equitable broker,” or “They are not pro Israeli,” because then history will dictate otherwise.

The Trump administration is the one that is rather unstable in the eyes of the American people and many sort of political onlookers around the world at large. Those problems again make it in my view highly unlikely if not impossible that anything good can come from this decision, from Trump’s Jerusalem speech that the US could be viewed as an honest broker.

The views and opinions expressed by Dr. Emran El-Badawi do not necessarily reflect those of Sputnik.

Ex-Senate Adviser: Trump Unlikely to Cut US Aid to Allies Over Jerusalem Vote