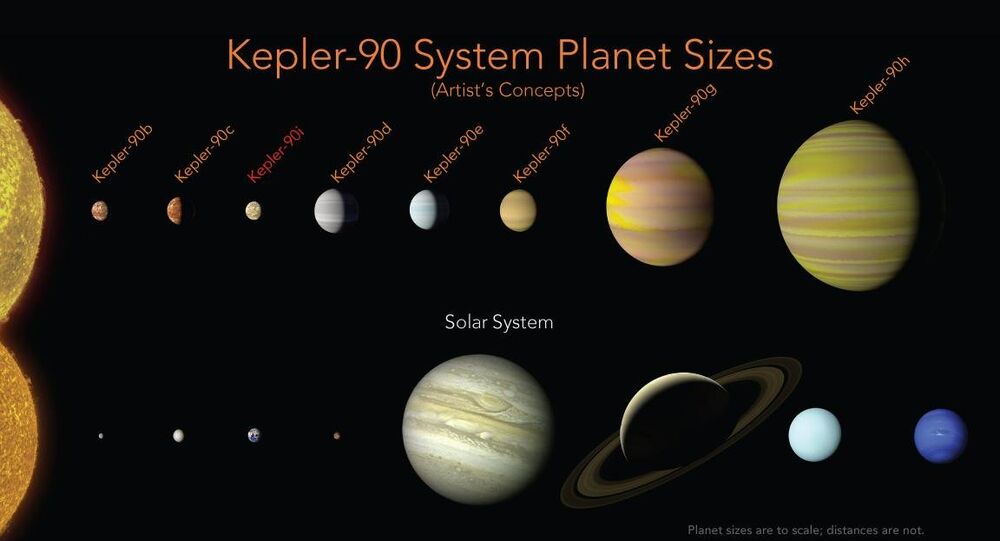 NASA’s Kepler space observatory has discovered a previously unnoticed small planet in the Kepler-90 system with the help of AI. Professor Suzanne Aigrain, an astrophysicist at Oxford University, told Radio Sputnik it was the first time that an “unsupervised machine learning method” was used to locate planets.

Suzanne Aigrain: The artificial intelligence method that was used this time is slightly different from what’s been tried before. People have been applying machine learning methods to exoplanet searches in general and to the Kepler data in particular. The type of method that was used this time is very much the unsupervised machine learning method: you just train it with a data set where you’ve already labeled which data sets contain planets and which do not, but you don’t tell it how to do the search, it figures it out.

© AP Photo / ESA/Hubble
NASA's Juno Spacecraft Looks Into the Depths of Jupiter's Great Red Spot
While before we were using methods which are more directed, where we set much more precisely what we think makes a good planet candidate. It means that potentially we could find new planets which we don’t really understand how to find and the machine is figuring out for us. There’s still quite a lot human intervention needed to enable this discovery, but hopefully in the future the amount of human intervention needed will go down.

Radio Sputnik: The newest research says there could be far more exoplanets than originally thought. What numbers are we talking about here then?

Suzanne Aigrain: The estimates vary depending on what exactly type of planet you’re talking about, but I think it’s quite clear that most stars host planets. There seems to be an interesting trend that smaller stars may be actually hosting more planets than bigger stars.

READ MORE: Mysterious Interstellar Object to Be Tested for Signs it Was Made by Aliens

We also have been able to look specifically at how frequent planets similar to our own Earth are, as are to planets that might be able to support life. And for this we think that they need to be similar in size to the Earth – not too big because otherwise it starts a gas envelope like Jupiter. And we also think they need similar temperature so that liquid water, where life started on Earth, is available on the surface of these planets.

And we’ve been able to try to measure how frequent those are; it’s difficult because they’re still very hard for us to find. But we think it could be as many as maybe one in three stars hosting such planets, and it’s very exciting.

Radio Sputnik: How many of those planets could potentially host alien life? And do you feel that humanity will ever be able to reach them?

Suzanne Aigrain: The planets in the Kepler-90 system specifically, none of them are thought to be good candidates for hosting life. All the terrestrial planets, including Keppler-90i, the recently found one, are very close to their star and are very hot. There are planets that lie in the habitable zone of that star but they’re all gas giants like Jupiter and so we don’t think that they will support life.

But Kepler and other projects have found some potentially habitable planets. Most of them are too far away for us to be able to study them in detail, let alone have any chance of communicating with them. But as time goes on, we’re finding small planets which might be susceptible to hosting life closer and closer to our own solar system. I still think that the idea of visiting them is science fiction.

The views and opinions expressed by Professor Suzanne Aigrain (full name of the contributor) are those of the astrophysicist and do not necessarily reflect those of Sputnik.