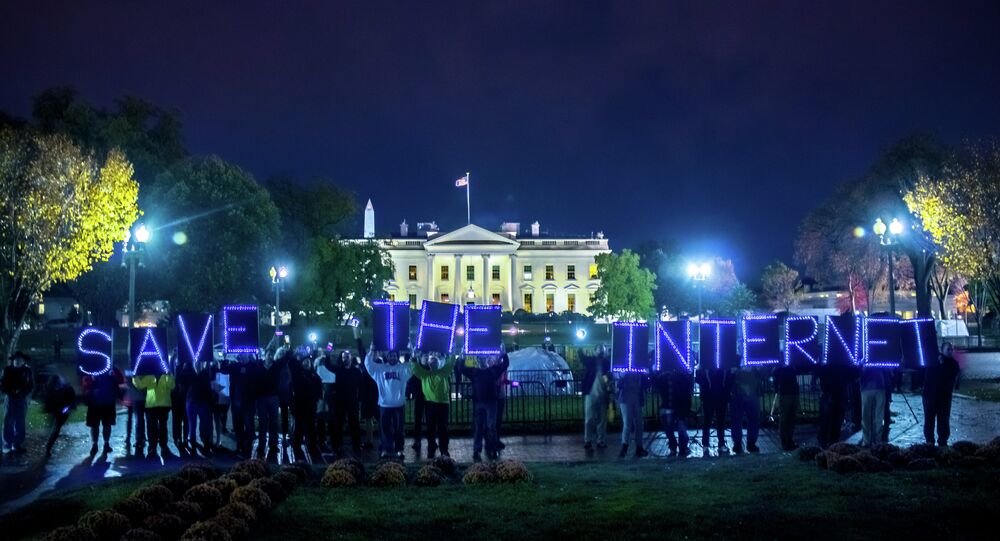 "What this would mean is that the FCC is uprooting, really, decades of net neutrality rules that have been carefully put in place by commissioners from both parties," said Zeese. "Under the Obama era, the FCC returned the internet back to Title II, which gives the FCC the ability to regulate internet."

"That means that the people who put us on the internet, the telecoms, the internet service providers, can't control us. They can't say, ‘no, you can't go to that website. No, you have to pay more if you want that website.' They can't block us, they can't throttle us, they can't control our internet use. We were free and equal, everyone has equal access, and the FCC was able to enforce it."

Zeese's view of an internet without net neutrality was a bleak one. "Now the FCC's moving internet from Title II to Title I, which reduces their regulatory ability. It removes net neutrality rules which made sure we had free and equal access to the internet. They have passed all regulatory authority from the FCC to the Federal Trade Commission, which really had no powers except to demand that the service providers be transparent."

"In other words they can say, ‘we're throttling this website, we're blocking this website.' Then the FTC can do nothing about it. So basically there's nothing protecting the consumers from the power of Verizon, AT&T, Spectrum and Comcast, the four companies that control our telecommunications."

Flowers mentioned that she had been discussing the decision with an FCC employee who informed her of how the decision would affect consumers on the internet. "Basically two things can change significantly: one is the internet can become similar to cable TV, where the telecom companies can charge you different packages for different access."

"Say you want to access Google and YouTube — you're gonna have to buy a premium package if you want to be able to access that content. This allows them to nickel and dime us. The second thing is that it allows the telecoms to exert a political agenda. If there's content that they don't agree with, they can throttle, slow down or block that content so that people using that service can't have access to it and don't know it exists. It really hurts us in those two ways and inhibits our ability to use the Internet as we know it today."

Zeese added that not only would ISPs be able to throttle politically inconvenient content, they could promote their own. Many telecommunications giants own news networks: Comcast, for instance, owns NBC Universal while Verizon owns Yahoo News.

"In addition to providing a service to our homes, they also are buying up different media outlets," said Zeese. "That means that they have a monetary interest in those media outlets, and they're going to want to prioritize those over other outlets. They may want to stifle dissent by blocking or throttling websites that they don't agree with the political views."

Kiriakou asked what sort of agenda these telecommunications titans might bring to media. "Of course they have an agenda," Zeese replied. "They're in favor of corporate power, regardless if it's Democrats or Republicans."

"Luckily, the people are very mobilized. Around 83 percent of the public supports our view. Net neutrality is supported by three out of four Republicans. We have a real mass national consensus, and our job now is to turn that into power. Anybody who's running for office has to be on the side of internet freedom, internet equality, because that is that is a demand we make as a movement."