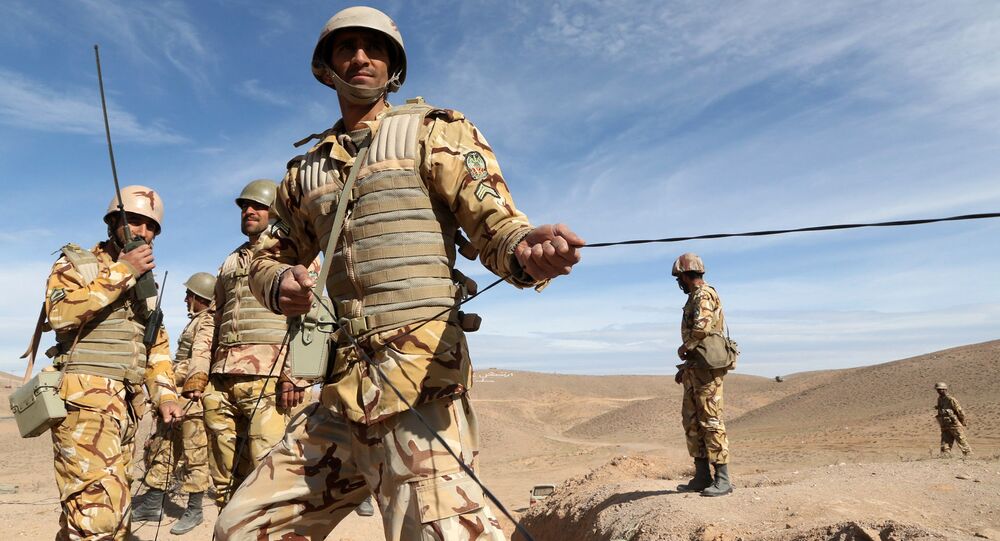 Damascus is seemingly not interested in the withdrawal of Iranian forces from Syria, given the US military presence in the region, political analyst Hassan Hanizadeh, former editor-in-chief of the Iranian news agency Mehr News, has told Sputnik, adding that Tehran would pull out immediately at the request of the Syrian government.

If the legitimate Syrian government requests Tehran withdraw its forces from the country, the Islamic Republic of Iran (IRI) will immediately do this, political analyst specializing in Iranian-Arab relations and former editor-in-chief of the Iranian news agency Mehr News, Hassan Hanizadeh, told Sputnik Iran.

"The Syrian Arab Army is now capable of finishing off those insignificant remnants of terrorists hiding in the region by itself. On the other hand, the withdrawal of Russian troops [from Syria] is also a signal for other allied countries to consider the possibility of the pullout of their military contingent," Hanizadeh opined, "As for Iran, Tehran is currently holding negotiations with Damascus."

At the same time, the Iranian analyst expressed concerns about the American military presence in the region: "The US has illegally occupied some areas of Syria, deploying its bases there," Hanizadeh said, adding that more than 2,000 US military servicemen are located in Raqqa alone.

"The US did not receive official permission from Damascus for such actions," the Iranian journalist stressed. "Therefore, we all agree that they [the Americans] should immediately leave Syria, since their presence there prompts serious concerns: it is the Americans who are 'heating up' terrorist groups in Syria."

© Sputnik / Musa Salgereev / NewsTeam
'Real De-Escalation': Why Putin Announced Pullout of Russian Troops From Syria
According to Hanizadeh, this is the reason behind Damascus' need for the presence of a limited contingent of Iranian and Russian military forces on the Syrian territory: "This is necessary to drive the Americans out and to confront the terrorists in case they are transferred to Syria due to the Americans' efforts."

The analyst noted that the Syrian government is due to announce its decision regarding the deployment of allied troops on its territory in the nearest future.

However, Hanizadeh believes that Damascus is not interested in the further withdrawal of its allies, since the Americans and extremist groups may again instigate chaos in the region, according to the Iranian journalist.

He focused attention on the fact that the Hmeymim and Tartus bases "remain at the disposal of Russia," despite the departure of the Russian armed forces. Hanizadeh reiterated that in contrast to their American counterparts, Russian military servicemen have been maintaining their presence in Syria absolutely legally.

The Iranian analyst highlighted that if the need arises, Moscow and Tehran will redeploy their forces in the country to ensure security. Meanwhile, Damascus is busy with restoring peace and stability in the country, he noted.

"The visit of Vladimir Putin to Syria can also be regarded as a demonstration of confidence in the future of the Syrian people," the journalist suggested.

He underscored that in the course of the Syrian war, Russia had provided the country with weapons and associated equipment, military personnel and humanitarian aid.

"Russia is well aware that terrorist groups such as al-Nusra Front, Jaish al-Islam and Ahrar al-Sham, were created with the assistance of the United States and its regional allies," Hanizadeh highlighted. "Russia paid a great price in its fight against terrorists. Iran, the Syrian Arab Army, militias and the fighters of the Hezbollah movement helped Russia in this fight. As a result they prevented the development of a catastrophic scenario — the transformation of Syria into a 'new Somalia' in the Middle East."

On December 11, President Putin announced the withdrawal of Russian troops from Syria after the successful completion of the two-year long campaign, specifying that the bases in Tartus and Hmeymim, as well as the center for Syrian reconciliation, would continue to operate.

For their part, Damascus' allies including Iran's special forces and Hezbollah fighters continue to maintain their presence on the ground. Foreign actors such as Turkey and the US-led coalition forces have yet to leave the territory of the sovereign state where they have been operating illegally for the past few years.

The views and opinions expressed by Hassan Hanizadeh are those of the analyst and do not necessarily reflect those of Sputnik.