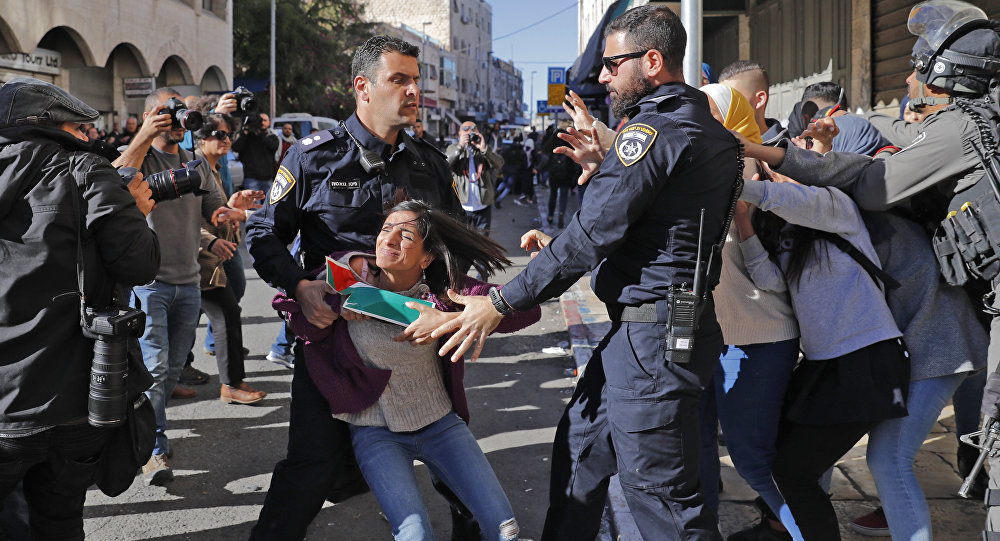 Hamas, the Islamic Resistance Movement, has declared a third Intifada against Israel. Professor Meir Litvak, an Israeli specialist on Hamas and director of the Alliance Center for Iranian Studies at Tel Aviv University, has shared his views with Radio Sputnik on the possibility of riots and stressed the viability of a two-state solution.

The announcement by itself is not serious because Hamas is calling for such Intifada ["rebellion"] for the past few years and not much has happened. What matters is the feeling in the streets where the level of anger and frustration will be such that there will be an Intifada. Hamas has found itself in trouble in the past two to three years economically, it is under the Israeli pressure and even worse additional pressure. It has suffered also under sanctions from the Palestinian Authority. So Hamas wants the way out of its political predicament, which is why it was looking for some reconciliation with the Palestinian Authority. Hamas is also under pressure from the more radical Salafist, jihadist organizations in Gaza that want to start a new fighting against Israel. Whereas Hamas understands that a new round of fighting with Israel will be very bad for Gaza. By the way, the recent Israeli attacks were in response to the launching of rockets from Gaza. Over fourteen rockets were launched from Gaza against Israel in the past two weeks alone. So the way for Hamas to get out of its predicament is to call for Intifada. What is important is not so much what Hamas calls [for], [but] whether or not the feelings among the Palestinians in the West Bank, and inside Israel, and whether or not the level of anger and frustration is such that they will indeed go to the streets and carry out major demonstrations or riots. And this we have to wait and see.

Sputnik: We have not seen that much violence so far, there have been incidents, of course. How difficult would it be to contain the chaos, should there be an uprising or more violence?

We have to remember that now the Palestinian Authority controls various cities in the West Bank…. The great fear of the Palestinian Authority is to lose control. There is a lot of anger against the Palestinian Authority in the West Bank because it is unable to get any political concessions from Israel. I think that there is also either some fatigue or some hopelessness among people in the West Bank that they understand that the demonstrations so far has not produced the desired political results. So we do have demonstrations, they may increase but we don't see the same level of popular participation yet. What may be important is, for instance, should the number of casualties rise then it can ignite more violence or more demonstrations. But if the Israeli forces will continue to carry out more of the same policy then the public lingering demonstrations for probably a long time but in a contained manner, again, how long, we have no idea. I mean, now you see outbursts of, you know, some stabbing attacks that we also witnessed last week when two Israelis were assassinated last week some were seriously injured by attacks by individual terrorist people again who are very angry, very frustrated and go and stab Israelis.

Sputnik: Why did it take so much time for Hamas to make this declaration?

Again, because Hamas is in a bind, Hamas is afraid of escalation to an all-out conflict with Israel, because then the price Gaza and Hamas may pay will be high. So they are afraid of full escalation, on the other hand they have to do something. And they also, I think, will wait to see how the public reacts. And then the calls for Intifada, in my view, is the solution for them. Thus they show that they are trying to mobilize the people, they can outmaneuver the Palestinian Authority by showing that they are more active against the Israelis, they may try to divert the attention or anger of the people in Gaza, over the very bad economic situation in Gaza, against the Israelis. And I think that they will weigh their options for a while before they came out in the calls of Intifada. And, again they will wait to see what will happen on the ground and then they will join the process or jump on the bandwagon, as we say in English, and try to control the process.

Sputnik: Is a two-state solution an actual option for Israel? Would Netanyahu actually ever commit to it, considering his recent policies?

The views and opinions expressed by Meir Litvak are those of the speaker and do not necessarily reflect those of Sputnik.

Who is Teaching the American South?; Israel Bombs Gaza