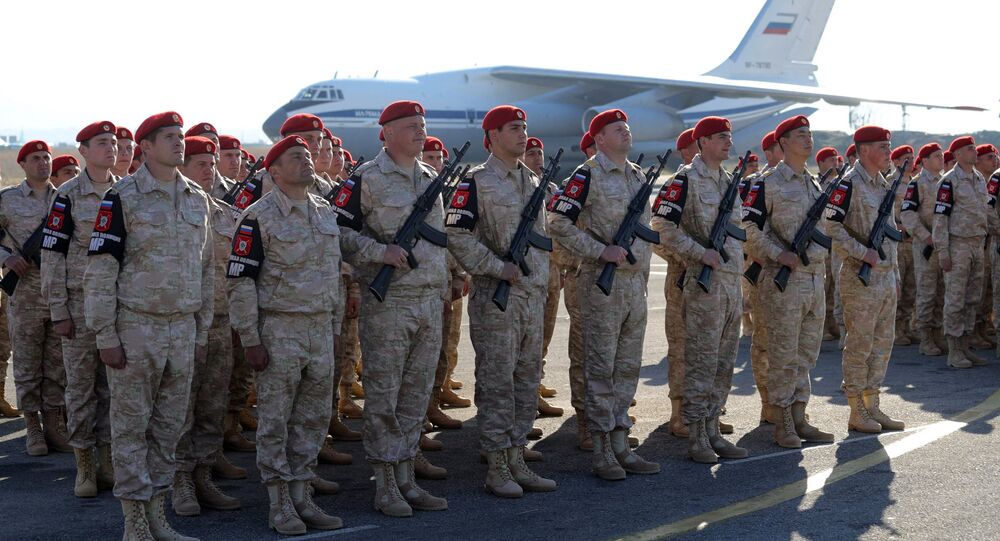 During his trip to Syria’s Latakia, President Vladimir Putin said that Russia would withdraw its military forces from the region. Speaking to Radio Sputnik, professor Eyal Zisser, vice rector of Tel Aviv University and the holder of The Yona and Dina Ettinger chair in Contemporary History of the Middle East, explained why the move is quite logical.

Sputnik: Does this announcement from the Russian leader come as a surprise?

The Russians said from the early beginning that they came to fight for a reason, to defeat ISIS [Daesh]. They have no intention to establish any sort of military presence in Syria. So it's quite logical that when the mission was accomplished, ISIS [Daesh] was defeated, there is no need for such level of presence. It was expected due to the military achievements in the battlefield.

Sputnik: Why is Russia's withdrawal at this particular moment in time so significant? Do you see it impacting the current military situation in the region?

It's a positive sign; it's a sign of trust in the assets, to main agreement signed by Russia, Iran, Turkey to stabilize the situation. This is a message of trust that stability can maintain without the presence of Russian forces. This might be the main impact. There is no any more need for the presence of the forces. By withdrawing them it's a very positive message to the entire region.

READ MORE: Russia Pulling Out Troops From Syria, What's Next? Five Things You Should Know

Sputnik: Do you think this is going to lead towards involving more different opposition groups like the Moscow and Cairo platforms we've heard about in the Syrian resolution talks?

Well, I don't think they had any problem with the Russian presence. They actually wanted Russia to play a role in the process. There shouldn't be any immediate impact on these negotiations. Russia, Russian President [Vladimir Putin] reached a point when there is no need to have military presence — people listen to him without this.

Sputnik: Vladimir Putin's visit to the region is the first by a foreign head of state. How important is the fact that Vladimir Putin arrived in person? Do you think it's more symbolic?

Yes, it's symbolic, I mean, because people want to see signs of relief and the light in the end of the tunnel and such a visit shows them that we are approaching slowly, slowly towards the end of the Syrian civil war.

Sputnik: The president did say that should terrorists "raise their heads again Russia of course will carry out strikes." This is like a warning, isn't it?

Yes, such an announcement from Moscow that Russia will withdraw its forces, you know there were several times in the past, there was some intention to withdraw Russian forces, but when the need [emerged] for the continuation of the military campaign these forces stayed. Nobody doubts that unless the stability will be achieved the Russians wouldn't leave till stability would be achieved.

Sputnik: Can we see this military victory as impacting the Syrian peace process?

With the Russian and the Iranian involvement, the rebels, when we speak on the other side, there are rebels, the moderate rebels that are taking part in the process and also the terrorists with the first sign of military involvement, it seems to me that the other side lost any hope in gaining victory. This was very important — the involvement, the presence, eventually, the military achievements would facilitate a peace process.

Sputnik: There is always the danger of terrorists infiltrating and regrouping. Do you think Syrian forces are capable currently of coping with the military situation as it is in the region right now, without Russia's help?

No, I don't think this is the case. Russian involvement is crucial and important but we still have thousands of Iranian and Shia militia forces fighting on Syrian side. There are still there. Also, Russia pulled out its forces but still has a presence and needs to facilitate the mediation process in many areas in Syria. And some of the rebel groups don't need to see a Syrian or a Russian aircraft — it's enough to see a Russian diplomat or a Russian mediator. They are there, there are those who ensure stability. It will take a long time till the Syrian state will be able to force law and order by itself.

Sputnik: And of course if we take a closer look at the border with Iraq, Russia announced that the Syrian Army had fully restored control over this area and this claim has been denied by the US. What actions can we expect from the US army?

There is some sort of an understanding between the Russians and the Americans, I mean at least between the presidents of those two states. I don't know what the American strategy is but let's assume they were interested in defeating ISIS [Daesh]. Once this mission was accomplished, I mean, I don't know what they are up to, they don't know as well. And I guess that eventually they will reach some sort of an understanding with the Russians.

Russia Pulling Out Troops From Syria, What's Next? Five Things You Should Know