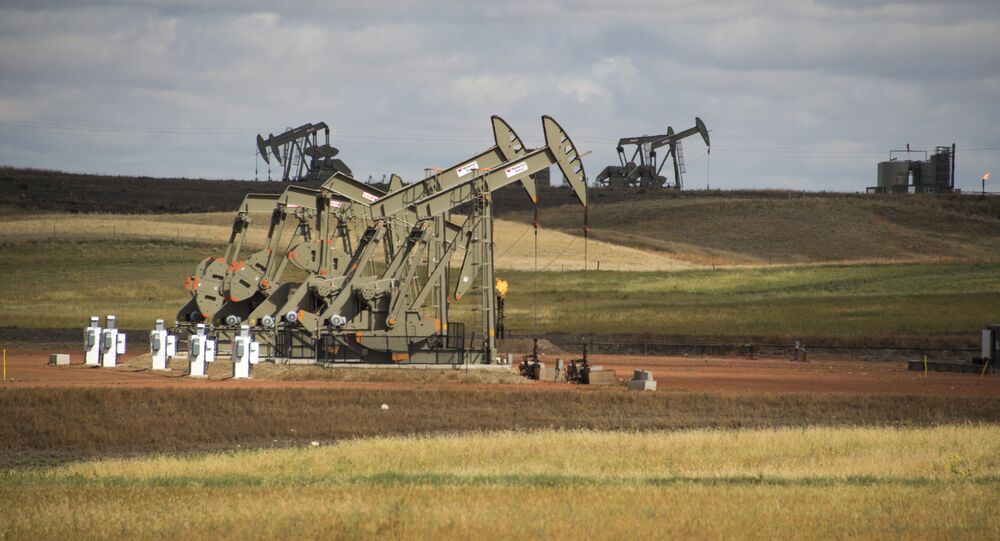 Economist: US Shale Industry Takes Side of Russia, OPEC

US shale investors have seemingly accepted defeat in the global oil price war, RIA Novosti contributor and Russian economist Ivan Danilov wrote, referring to the major shale shareholders secret September meeting in New York City. According to the economist, their decision to shift focus to making money is good news for the global oil market.

If US shale oil companies start aiming for a profit, and not focus on production growth, one of the main factors restraining the growth in oil prices will disappear in the near future, Ivan Danilov, a Russian economist, political analyst and author of the popular political blog Crimson Alter, writes for RIA Novosti.

Danilov referred to the reported secret meeting of twelve major shareholders in US shale-hydrocarbon producers that took place this September in New York City. Citing The Wall Street Journal December 7 report, the Russian economist noted that the "shale barons" had de facto accepted defeat in the global oil price war by shifting their focus on growing revenues.

© AFP 2020 / Robyn BECK
US vs. OPEC: Shale Companies Push Oil Prices Down, Risk Losing the Market
Meanwhile, Bloomberg says that shale investors are seeking to benefit from the rise of crude prices orchestrated by the Organization of the Petroleum Exporting Countries (OPEC) instead of trying to fill the niche left by global oil producers in its Monday article entitled "Big Shale Turns OPEC Ally From Foe With Focus on Oil Returns."

The media outlet cited Matt Gallagher, chief operation officer of Parsley Energy, an independent US oil and natural gas company, who emphasized that "higher oil prices can bring in more cash to the balance sheet," so, there is no need "to chase additional activity."

After a few years of struggle aimed at asphyxiating their Russian and Saudi competitors, American shale producers have given up geopolitical games and focused on making money, Danilov elaborated.

According to the economist, the meeting of the largest investors in the US shale companies indicates that the PR stunt claiming that the American shale industry remains profitable even at $20 per barrel turned out to be a lie.

Despite numerous measures to bolster efficiency in production and lower oilfield services' costs the US shale production suffered losses in 2012 and today, Danilov wrote.

"For several years investors lived with the hope that cheap American oil, would literally flood the world market, leading to the collapse of competitors — primarily Russia and the OPEC countries — after which US companies would earn fabulous profits," the economist suggested, adding that some observers even predicted the fall of the Russian and Saudi Arabia's statehood due to the sharp fall in oil prices.

© Photo : Pixabay
Edge of Disinvestment: US Shale Oil Sector Under Pressure Amid Prices Slide
However, these prognoses have never turned into reality, the analyst underscored.

Instead, as Reuters market analyst John Kemp noted in June 2017, "US shale firms [were] drilling themselves into a deep hole despite warnings from industry leaders about the risk of flooding the market with too much crude."

To illustrate his point, Kemp referred to US petroleum and natural gas company Pioneer Natural Resources, which reported losses of $273 million in 2015, $556 million in 2016 and a further loss of $42 million in the first quarter of 2017.

Citing Evercore International Strategy & Investment (ISI) consulting company, Danilov highlighted that US oil companies have in general spent $280 billion more than they received from their shale operations during their price war with Russia and Saudi Arabia. For comparison's sake, $280 billion equates to the price of 21 modern US aircraft carriers USS Gerald R. Ford (CVN-78), the Russian economist remarked.

According to Danilov, the change in the mood of American "shale barons" is good news for the oil market. Still, the Russian analyst does not exclude the scenario under which some US shale industries will continue to increase shale production aiming to fight out the price war to bitter end.

"However, the US 'shale barons' run the risk of infuriating Washington politicians," the economist remarked, "The September conference in New York City resembles nothing but a 'cartel collusion' and given the anti-Russian hysteria which is raging on in the US it is quite possible that the [American] 'shale barons' will be accused of working for the Kremlin."

The views and opinions expressed by Ivan Danilov are those of the analyst and do not necessarily reflect those of Sputnik.