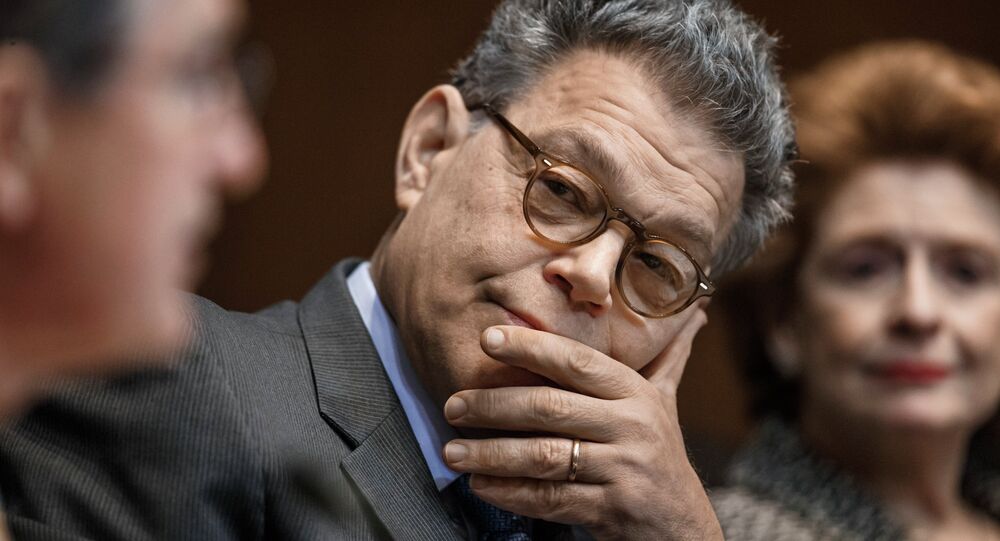 Editor: Sexual Misconduct Allegations May Not End as ‘More Names Will Come Up'

On Thursday, Minnesota Sen. Al Franken officially announced that he would be resigning from his role "in the coming weeks," after several women came forward and shed light on the politician's history of sexual misconduct.

However, Franken didn't just lie down and accept his fate. Instead, the 66-year-old politician took aim at US President Donald Trump and Republican Senate candidate Roy Moore, who have yet been forced to step aside despite facing more extreme sexual misconduct and assault claims.

"There is some irony in the fact that I am leaving while a man who has bragged on tape about his history of sexual assault sits in the Oval Office, and a man who has repeatedly preyed on young girls campaigns for the Senate with the full support of his party," Franken said in his speech to fellow lawmakers.

However, Franken's shot at both Trump and Moore doesn't change the fact that he "stuck his tongue in womens' mouths who did not want to kiss him," says Jane Cutter, editor of Liberation News.

​Speaking to Radio Sputnik's Loud & Clear, Cutter told show hosts Brian Becker and John Kiriakou that Franken "can't really create layers of badness when it comes to forcing yourself on people sexually who don't want you when you're supposedly a leader of a country."

"I think he's now disqualified from any kind of moral high ground," Cutter added. "For him to then point at the president and say ‘well he was worse' doesn't really cut the mustard as far as I'm concerned."

Franken's resignation was "obviously forced on him because the Democratic party turned on him," Becker suggested.

But don't take his resignation as a sign that Congress as a whole is turning a corner.

"I don't think it's over, probably more names will come up," Cutter said, speculating that more lawmakers will be exposed. "It's a separate question of are we as a culture or even is Congress is turning a corner."

"I certainly hope so," she noted.

Franken is joined by the likes of Michigan's former Rep. John Conyers, who chose to retire from office instead of resigning. Hours after the Minnesota senator made his announcement, fellow lawmaker Trent Franks, a Republican representing Arizona, released a statement saying he would also be resigning.