Trump is allegedly considering establishing an independent new private global spy network that would circumvent the existing US intelligence agencies and answer only to the US President and CIA director. Former FBI Special Agent Mark Rossini warned Radio Sputnik that creating such an organization means "going down a slippery slope."

Mark Rossini: The creation of such an organization is fraught with peril and dangers. We’ve seen this danger during the Iraq war. The Bush W. administration…the intelligence that the agencies were providing was not what they wanted to hear, or rather what Cheney and Rumsfeld wanted to hear; they created their own separate organization within the Pentagon to create the intelligence they wanted to have in order to justify the invasion of Iraq…

So we’re going down a slippery slope by creating such private organizations that circumvent the established agencies. Intelligence cannot be tailored to your opinion; intelligence creates your opinion, the path that you take and the action that you take. It’s like creating evidence in the court of war.

Radio Sputnik: When we allow spying to private agencies, what kind of powers could they possibly have? Who do they answer to, really? Are they completely above the law? 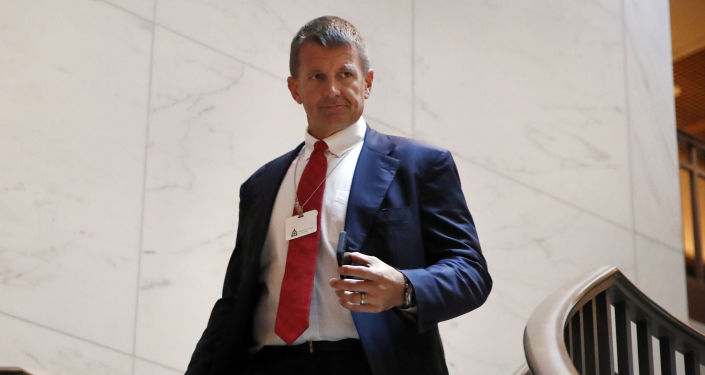 © AP Photo / Jacquelyn Martin
US House Democrat: Prince Must Reveal More Details to Intelligence Committee
Mark Rossini: In many respects they are, and in many respects they are not; and here again is the slippery slope. There are many former FBI agents around the globe and in their daily activity they may encounter something and uncover something that may be criminal, or they may think that the guy back at the shop might want to know this. And they provide the information back and say "Hey look, I came across this, you might want to know it"… And sometimes, maybe the government may realize they have a former agent living in a foreign country or a certain area of the world and they say "Hey look, can you do something? Can you go take a picture? Because, quite frankly, we don’t have the time or don’t have anybody in the area."

What happens is that when they use that person, that private citizen to do something over where you’re actually running an operation and therefore they, let’s say, get caught – what is their authority? They have no real authority. When I was in the government, and the government sent me on a mission someplace or to do something official, I had the full protection of my diplomatic passport, full protection of being invited to that country to do their job…

And then we get into the whole issue of integrity. Again, the slippery slope: once you make that first move toward something extraordinary, then you go down a path of having to deny and lie, which is a crime; I don’t see it being the right thing. You can ask a private intelligence agency for information to maybe supplement what you may or may not know. But to officially use them in lieu of the established organizations? It’s just not the right path to go down…