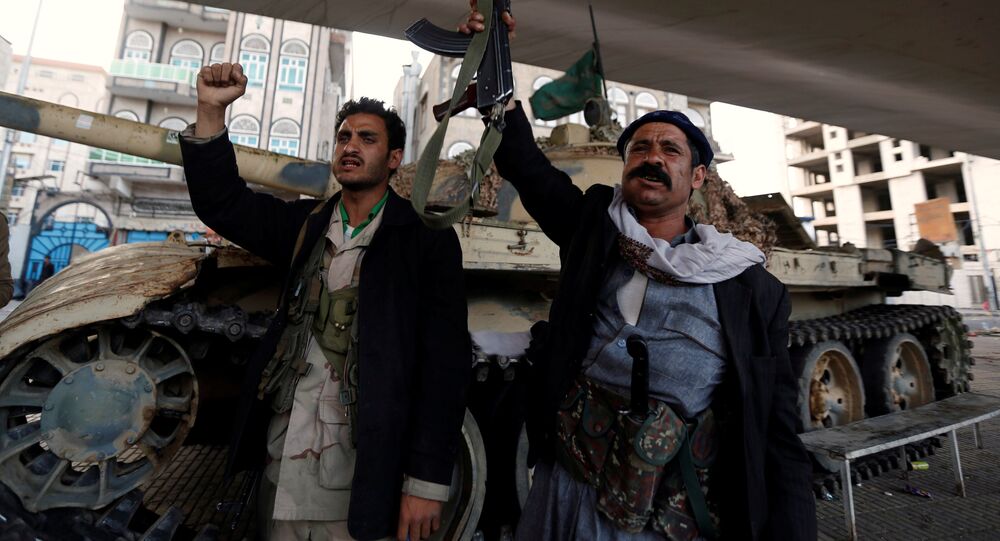 Following a bid to turn "a new page" in relations with the Saudi-led coalition, Yemen's former president Saleh was killed yesterday by the Houthis - his allies during the 2015-2016 struggle against the coalition. Speaking to Sputnik, politicians and observers from Yemen and Saudi Arabia shared their views on what will happen next in the country.

Former Yemeni president Ali Abdullah Saleh "killed himself when he openly announced that he had taken the side of the enemy," said Ahmed Hamid, spokesman for Ansar Allah, an official name for the Islamic religious-political Houthi movement.

"He trained armed groups in the south of the country who were supposed to conduct hostile missions," Hamid told Sputnik Arabic. "We learned all his plans with all the details and told him about it. However, he did not change his mind and said that the people would follow him."

'Yemen to Become More Stable and Secure Without Saleh'

© Photo : Youtube / Sputnik Arabic
What Does the Death of Former President Saleh Mean for the Yemeni Civil War?
According to the representatives of the Houthis, Saleh's murder was by no means revenge while the striking resemblance of his death to that of Libyan leader Muammar Gaddafi is a "pure coincidence." If he had not resisted, he would have been brought to justice, they insist.

Hamid believes that, after Saleh's death, Yemen will become more stable and secure while at the political level there will be more transparency and a better understanding of what is happening.

The Ansar Allah spokesman said that the General People's Congress, a Yemeni nationalist political party which had been chaired by Saleh for 40 years, "welcomes cooperation" with the Houthis, because "they did not declare war on [Ansar Allah], this was done by the head of the party, who met his death a few days after his statement."

In a Saturday speech, Saleh stated that he was ready to turn "a new page" in relations with the Saudi-led coalition that has been at war against the Houthis since 2015. On Sunday, Saleh severed ties with his former allies — the Houthi rebels — and announced that Yemen "has to be saved from the madness" of the Ansar Allah movement.

According to Yemeni political scientist Fuad Masad, the General People's Congress is likely to refrain from taking any steps and will wait until the situation clarifies.

Masad called upon the party's leadership in Sanaa not to succumb to provocation. He believes that the murder of Saleh could trigger the creation of new anti-Houthi coalitions both inside the country and beyond.

"Saleh was assassinated not only for his betrayal, as the Houthis say," Masad told Sputnik. "They settled an old score: It was Abdullah Saleh who killed their leader Hussein Badreddin al-Houthi while being the president. The Houthis did not forget this and as soon as they saw an opportunity, they declared the split and murdered Saleh."

'Assassination of Saleh Will Lead to New Clashes, Protracted Crisis'

Hussein Laqur ben Idan, one of the leaders of the Yemeni political and paramilitary Southern Movement (al-Hirak), doesn't share Ansar Allah's optimism. According to Idan, the assassination of Saleh will provoke new clashes which will lead to a protracted crisis.

"The conflict won't be brought to end in Yemen as long as Houthi groups maintain control over Sanaa," the politician told Sputnik.

According to Idan, there is a strong divide between the General People's Congress and the Ansar Allah group. "Without the General National Congress, the Houthis are very weak, therefore their positions will worsen tremendously," he predicted, adding that it was the forces loyal to Saleh who enabled the Houthis to take control of the Yemeni capital and other areas.

'Yemen is Entering the Worst Period in Its History'

Saudi military expert, retired Major General Abdalla Ganim al-Qahtani, echoed Idan, suggesting that after the murder of the former Yemeni president, the country "is entering the worst period in its recent history."

© AP Photo / Hani Mohammed
Political Analyst: 'After Saleh's Death We Will Witness Massacre in Yemen'
"One should expect repressions and clashes between the warring parties, for instance, between the tribes and the Houthis," al-Qahtani foresees. "I think there will be chaos in Yemen in general and in Sanaa in particular. The Houthis will turn into a terrorist force that will kill its opponents and those who oppose Iran."

The retired major general believes that Iran was behind the assassination of Saleh. He referred to Tehran's silence on the recent developments in Sanaa.  "Tehran does not need to say anything, it is itself involved in these events," the military expert said. "In Sanaa there are Iranian military men, snipers, engineers, scouts."

The Saudi general called upon all parties concerned, especially the government of Yemeni President Abdrabbuh Mansour Hadi, to continue the fight against Houthi rebels. He believes that Saleh's murder would prompt the Yemenis to resist Ansar Allah. "Unfortunately, this will lead to great losses and the oppressed Yemeni people will pay in blood in this war," he said.

On December 4, former Yemeni president Ali Abdullah Saleh was killed by Houthi rebels. Earlier in the day his residence was blown up. Later a hideous video found its way to social media presumably depicting the corpse of the former Yemeni leader.

© REUTERS / Mohamed al-Sayaghi
Yemen Civil War: The Impact of 986 Days of Conflict in Numbers
The attack occurred after six days of fierce clashes between the Houthis and the republican guard loyal to the former Yemeni president, including the Saudi-led coalition forces.

Following the assassination of Saleh, President Hadi called upon the Yemenis to team up and rise against the Houthi movement.

Speaking to Sputnik, Soumaya Beltifa, the International Committee of the Red Cross (ICRC) representative in Sanaa reported that the recent clashes in the Yemeni capital resulted in 400 wounded and 234 dead.

In general, the Yemeni civil war, which erupted in 2015 following the Houthi rebellion in September 2014, has claimed the lives of about 10,000 people, according to UN estimates.