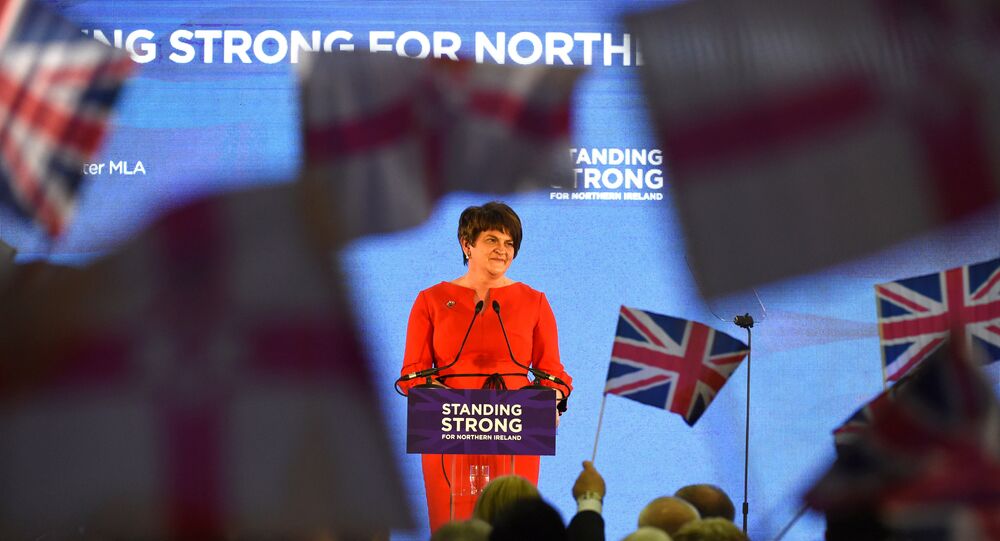 Despite apparent success at reaching an agreement with Brussels, UK Prime Minister Theresa May risks losing the Democratic Unionist Party as a government partner, as Scotland leads calls to remain in Customs Union/Single Market.

The head of the Democratic Unionist Party of Northern Ireland, which is keeping British Prime Minister Theresa May's Conservatives in power via parliamentary support agreement, publicly rebuked the PM December 4 over the former's efforts at settling the issue of the Northern Irish border with the Republic of Ireland.

Arlene Foster bluntly rejected any suggestion the country's links with Britain could be loosened in order to prevent a hard border.

We will not accept any form of regulatory divergence which separates Northern Ireland economically or politically from the rest of the United Kingdom. pic.twitter.com/uCBVdfVQTJ

She also accused the Republic of Ireland Government of trying to change the nature of the political arrangement which governs Northern Ireland without the DUP's input, saying the party, "will not stand for that."

The DUP has favored a "soft Brexit" arrangement with the EU, but has adamantly rejected Northern Ireland having any status separate from that of mainland Britain, going so far as to threaten the collapse of the Government on November 30.

On the other hand, Scottish First Minister Nicola Sturgeon tweeted after Foster's statement, suggesting if Northern Ireland is to remain inside or affiliated to the EU Customs Union, Scotland should be as well. She then followed up with the results of a Survation poll from September 2017 showing 47 percent support for Scottish Independence from the UK.

If one part of UK can retain regulatory alignment with EU and effectively stay in the single market (which is the right solution for Northern Ireland) there is surely no good practical reason why others can’t.

Hard Border Off the Table

​Speaking to Sputnik Radio, Dr. Simon Usherwood of the University of Surrey's Department of Politics said the day's developments seemed to take a "hard border scenario" off the table.

"It looks like the UK has agreed there won't be a divergence in regulation between Northern Ireland and the Republic of Ireland, which means that you then don't have a hard border. That then implies that Northern Ireland at least will follow EU rules despite being outside of the organization. The thing that's striking is the text we're seeing floating around today looks very much like the kind of thing that the EU was saying would be necessary back at the beginning of the Article 50," Dr. Usherwood added.

The border issue had in recent weeks been a crucial sticking point threatening to derail progress of negotiations on a future trading relationship between Britain and the EU — any member state has the right to veto the final agreement, which the Irish Government said explicitly on November 17 it would do if there is any return of border and customs checks on goods, and people moving between Belfast and Dublin.

President of the European Council Donald Tusk announced he was delaying a trip to the Middle East to focus on the issue, having previously stated Brussels would back whatever Dublin's final decision was.

Irish Prime Minister Leo Varadkar said via his Twitter account he'd held discussions with Jean-Claude Juncker and that he would be issuing a statement on the talks later on Monday.

Cabinet met this morning. I will be making a statement on Phase I Brexit talks later today.

EU Guidelines on Brexit Talks May Refer to 'United Ireland'