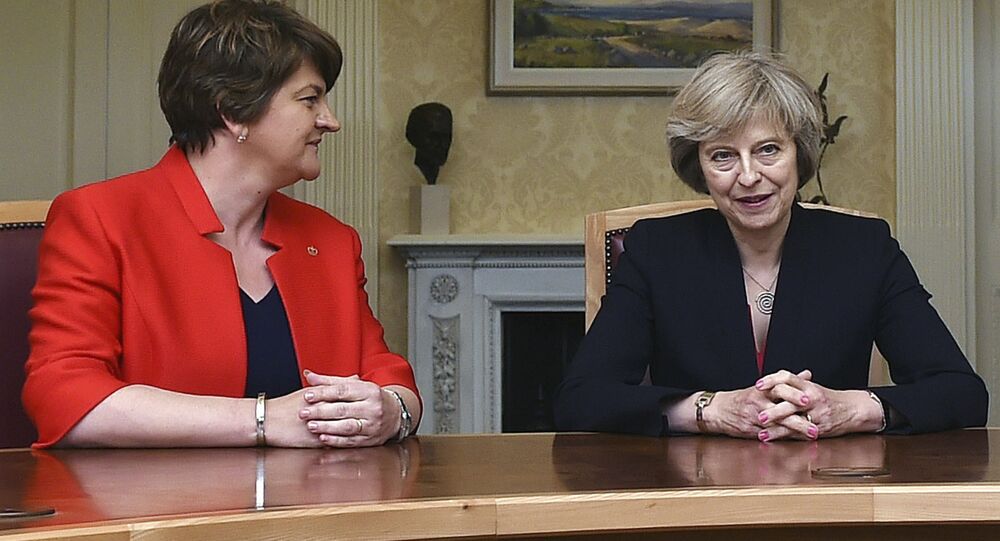 Should the UK PM Theresa May compromise over the Irish border after Brexit, her partners in Belfast have threatened to renege on the current coalition with the Tories.

The political union between the Northern Irish Democratic Unionist Party and the UK Conservatives followed a controversial 1 billion pound investment promise or so called cash for vote's proposal from Theresa May.

Dublin, with Brussels' approval, believes that the solution would be for Northern Ireland to remain in the EU single market and customs union.

READ MORE: Irish Get Tough With Britain Over Brexit: No Border Deal, No Trade Talk

The only alternative suggested by the republic's government is that is the UK makes a written commitment to convergence on regulations, in order to avoid border checks.

UK and EU officials will meet to negotiate a deal concerning the Irish border over the weekend but one thing is clear — the Irish border is a sensitive issue that transcends Brexit and must be treated with the utmost seriousness as to avoid deteriorating relations that have significantly improved since the Good Friday agreement.

Sputnik spoke with Johnathan Tonge, professor of politics at the University of Liverpool to get his views on the situation in Northern Ireland.

Sputnik: What do you believe will be the likely solution to the Irish border problem?

Johnathan Tonge: The likely solution may yet be that there will be a UK wide customs arrangement special customs union with the Irish government. That would solve the problem of the border. Whether the European Union will allow that is open to question though. The solution that probably won't work is a Northern Ireland-Irish Republic customs union across the border because that's a difficult sell to the Democratic Unionist Party on whom the Conservatives rely for votes at Westminster.

The alternative really is no solution. Frankly what you have is the UK leaving the European Union, there are no special arrangements for Northern Ireland or the Republic of Ireland, and you have tariffs on goods going across the border. Insofar as there is a solution, it's purely one in which electronic surveillance rather than customs posts are used.

© AP Photo / Peter Morrison
A motorist crosses over the border from the Irish Republic into Northern Ireland near the town of Jonesborough, Northern Ireland, Monday, Jan. 30, 2017

Sputnik: Do you believe that there is a chance that the coalition between the Conservatives and the DUP could collapse?

Johnathan Tonge: I think both parties would be desperate to avoid it being collapsed. The Conservatives don't want an election because Labour are rising very highly in the polls. The DUP don't want an election because there is a risk of a Corbyn-led government and that would not be seen as in the DUP'S interests at all. I think that both parties despite all the grandstanding that is going on now will be desperate to avoid an election, so they will probably stay together in a somewhat loveless parliamentary arrangement from here on.

Sputnik: Could there be a second EU referendum in Northern Ireland?

Johnathan Tonge: I think Westminster's position is very clear — whatever arrangements the rest of the UK leaves under, that's the arrangement they will have to take and have to retain for Northern Ireland. I think a second referendum is pretty unlikely.

'No Christmas Election' for Ireland With Deputy PM Fitzerald Gone