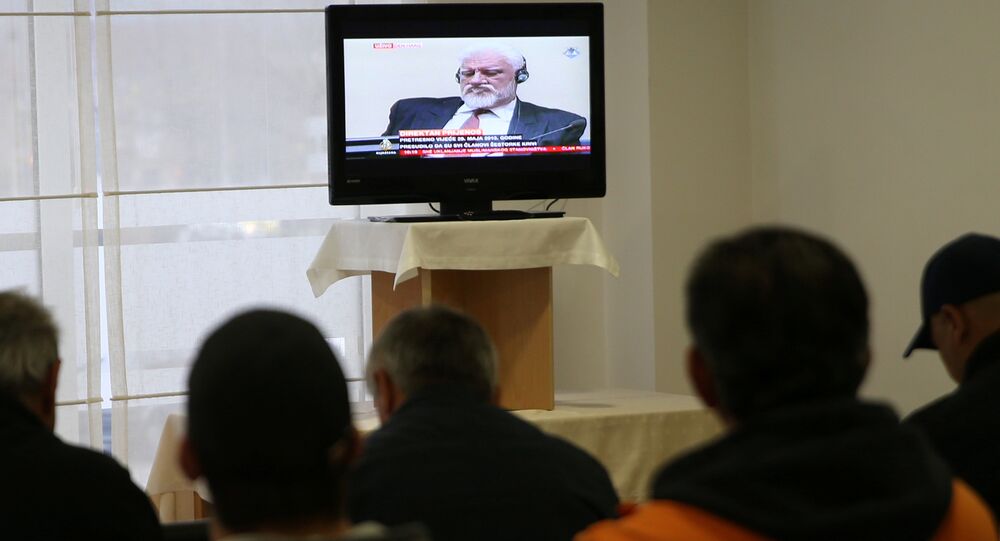 Former Serbian Yugoslav People's Army officer Veselin Sljivancanin, subjected to trial and imprisonment by the Hague for his alleged role in the deaths of Croatian POWs during the Croatian War of Independence, told Sputnik he was shocked by Wednesday's suicide-by-poisoning death of former Bosnian Croat military commander Slobodan Praljak.

Dutch Prosecutor Marilyn Fikenscher confirmed Thursday that traces of a deadly substance had been found in the bottle gulped down by Praljak as prosecutors confirmed a lengthy sentence for his involvement in war crimes during the 1992-1995 Bosnian War.

© AP Photo / Amel Emric
EXCLUSIVE: Bosnian Croat Commander's Lawyer Has 'No Idea' How He Snuck Poison Into Court
Praljak's shocking gesture, captured on live television, left Croatians in shock. Croatian President Kolinda Grabar Kitarovic said his country was "deeply struck in the heart" by the former commander's death, adding that he was convinced that Praljak "would rather take his own life than live as a convict for acts he firmly believed he hadn't committed." Croatia's government held a moment of silence for Praljak and the victims of the Bosnian War on Thursday.

But condolences were unexpectedly found coming from the other side, as well, including from a former Yugoslav Army (JNA) officer which the International Criminal Tribunal for the Former Yugoslavia once tried and convicted for his alleged role in the killing of Croatian POWs during Croatia's 1991-1995 war of independence.

Speaking to Sputnik Serbia, Veselin Sljivancanin, a former Montenegrin Serb JNA officer released in 2011 after serving over seven years a Hague jail, expressed his condolences to Praljak's family over the ex-commander's death, saying he remembers him as someone who "was fair to me and my family."

Sljivancanin noted that while he was imprisoned at The Hague, he often saw Praljak at the gym, and occasionally in the visitors' area.

"When I was sentenced to 18 years, he was very fair to me and my family. He came up in the visitor's area and told me: 'I have seen your behavior in prison, and I respect you. You can count on my support and help. I do not believe that you are the person you were made out to be by your verdict," Sljivancanin recalled.

© Sputnik / Alexey Vitvitsky
The Murder of Yugoslavia
The Serb ex-JNA officer's unexpected solidarity with the Bosnian Croat commander was echoed by Praljak's lawyer, Natasa Favo Ivanovic, an ethnic Serb. Speaking to Sputnik on Wednesday, Ivanovic condemned the way the Hague Tribunal operates, not just in the Praljak case, but with the trials of former Bosnian Serb commander Ratko Mladic and former Serbian President Slobodan Milosevic as well.

Asked to comment on how it was possible for Praljak to sneak poison into the courtroom, Sljivancanin said it came down to his character and willpower. "Whatever security exists, if one is fearless and capable enough, and really wants to do it, he could bring in anything he wanted, even if subjected to a thorough search. It depends on the person," he stressed.

Praljak's dramatic death, and Mladic's scandal-laden conviction last week, have led many residents of the former Yugoslavia and observers from around the world to recall NATO's role in the country's collapse and the brutal conflicts which followed, and to ask when Washington, Berlin and their allies would receive their own day in court for what took place.