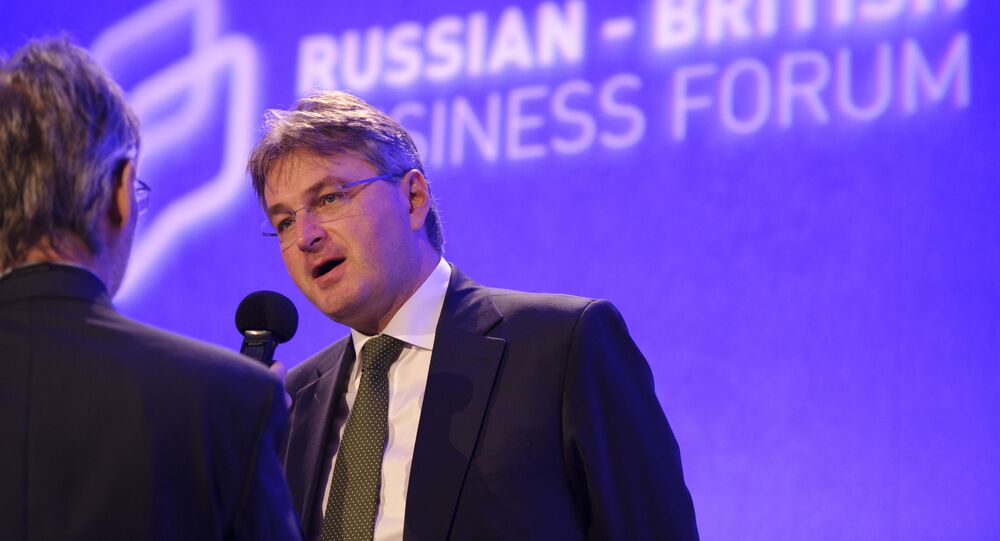 While it is currently fashionable in British politics to be anti-Russian, it is imperative to have a more pragmatic approach to relations with Moscow, Daniel Kawczynski, a Conservative MP told Sputnik. Britain risks lagging behind EU competitors in doing business with Russia, especially post-Brexit.

Sputnik: How do you see the prospects for improving bilateral business climate?

Daniel Kawczynski: I am encouraged by the sheer numbers of people who are at this conference. I spoke to this conference last year. There is significantly more people this year than there were in 2016 and despite the megaphone diplomacy that has existed and despite the scaremongering that certain elements of our media and political circles are trying to put out on Russia, there is more and more interest from British and Russian business people in being able to engage with one another. And as I said to the audience this morning, they are going to be — have to be — an intrinsic part of improving relations with Russia. Businesses, people doing business with one another is an intrinsic part in building up mutual respect and trust.

Sputnik: And what is the role of the government? The Foreign Secretary Boris Johnson is expected to go to Moscow in a month's time. So will he be setting the tone for doing business with Russia?

Daniel Kawczynski:  Yes, he is due there, and there is another top Minister [top official] from the Foreign Office going before his visit. I want to see from Boris Johnson a tangible approach that they are finally prepared to engage with the Russians on trying to resolve some outstanding issues. I have to tell you, I have spoken to senior British politicians who don't know what Minsk 2 is! Now, can you believe it?! There is so much ignorance about Minsk 2, about the complexities of Minsk 2, the ramifications of Minsk 2. The United Kingdom has to be at the very center of trying to resolve the conflict between Russia and Ukraine, so that we can get back to a normal relationship with a fellow member of the Security Council.

Sputnik: Indeed, the UK has a lot to share regarding the peace process in Northern Ireland, which could be compared in a way to the conflict in East Ukraine.

Daniel Kawczynski: Absolutely! We've been through the torture that has been a painstaking negotiation process between different communities on the border of Ireland. We have our own experience. I visited Donetsk last year as part of a Foreign Affairs Select Committee visit. And when I was there in Donetsk the independent OSCE [Organization for Security and Cooperation in Europe — Ed] monitors said to us that both sides were responsible for the ceasefire violations. So this idea that Ukraine is some sort of innocent party and the Russians are the sole aggressor is a massive oversimplification of the problem. And the sooner that major European powers like Britain start to understand and engage and try to help these two countries to resolve the outstanding issues the better for all concerned. But let me say this also to you: we have never been invaded by Russia we've never been occupied by Russia so we don't have that raw sensitivity towards the Russians that countries like Poland, where I was born, have. And what we should be doing — we should be working with our Polish allies and others to try to lower tensions with the Russians, not to increase them!

You know, I take my beloved daughter every year to the Polish-Russian border, to the seaside, and I've said to her: this is the most highly militarized part of Europe. The Kaliningrad Oblast [Region] where it borders Poland — if we continue to have the tit-for-tat missile deployments on both sides of the border between Kaliningrad and Poland — it's go going to end up like the North-South Korean border. Now, only a fool would want that sort of escalation, and militarization of that part of Europe, and I for one want to ensure that that is stopped, and that we get back to a détente with Russia.

Sputnik: And what are you constituents telling you regarding the relationship with Russia?

Daniel Kawczynski: And that's a very good question, because if you go out on the streets of my constituency or go out anywhere in the United Kingdom and you talk to them about Russia, about Russian history, Russian literature, Russian culture, Russian science, and the extraordinary achievements that Russia has done; the bravery of the Russian people in fighting and destroying fascism, which by the way had hugely beneficial implication for our generations. The Russian have achieved so much — and I think a lot of people understand that, and they want to get back to a relationship of cooperation with Russians, whether it's in science, technology, the arts or — very importantly — business.

And I've come here [Russian-British Business Forum] specifically to ask the business community of both sides to ignore to a certain extent the political difficulties, start building up those contacts and start preparing yourselves — now — for the time when we do get back to normal relations, because I have every confidence that we will get back to some sense of normality with our Russian friends in the future.