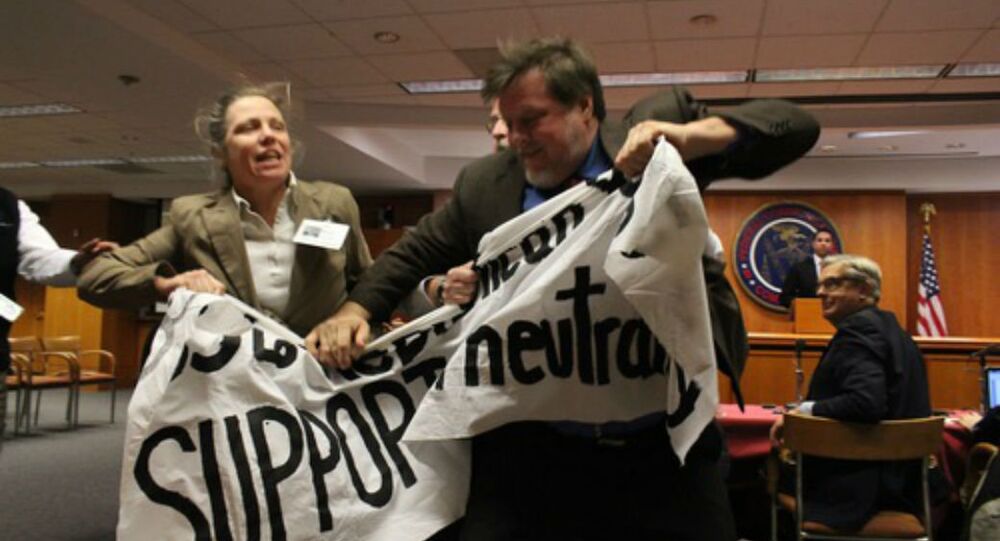 Ever since Federal Communications Commission (FCC) Chair Ajit Pai revealed his plan last week to end net neutrality, a move that would allow broadband service providers to control what content consumers can access on the internet as early as January, millions of voices have erupted in protest and anger.

On Radio Sputnik's By Any Means Necessary, web designer and technologist Chris Garrafa discussed how rolling back net neutrality laws could affect independent websites and vulnerable populations in the US like low-income citizens, youth and people of color.

"Net neutrality is just the idea that your internet service provider can't interfere with your internet traffic when you're going to a website. They can't slow it down because they don't like the site or it's competitive to them and they can't charge you more to access certain websites," Garrafa explained to hosts Eugene Puryear and Sean Blackmon.

In other words, net neutrality protects free speech by not allowing internet service providers to block content, slow down competitors' content or discriminate against political opinions they disagree with.

Destroying neutrality could allow internet providers to charge customers more money to access certain online content, he pointed out. "If you look at Portugal where they don't have any net neutrality regulations right now, they have an internet service provider — it's called MEO — and it is owned by one of the country's largest telecommunications companies, and they charge you 5 euros a month to do your messaging on Whatsapp and Skype; another 5 euros a month to get on Facebook, Twitter, Instagram and Snapchat; and if you want access to Netflix or YouTube, you have to pay another 5 euros."

Garrafa noted that in the last couple of days, US internet giant Comcast has quietly walked back its previous promises to never violate the rules of net neutrality.

While Comcast still claims it won't block internet content, the company seems to have changed its stance on paid prioritization, an agreement through which content owners pay broadband providers to favor their own content.

Last week, Comcast tweeted, "We do not and will not block, throttle or discriminate against lawful content. We will continue to make sure our policies are clear and transparent for consumers, and we will not change our commitment to these principles."

However, Garrafa noted that Comcast hasn't explicitly stated that it won't offer paid prioritization, so though the company might not slow service to any websites, they could speed up access to sites that pay for priority service.

In 2014, when the FCC was working on network neutrality rules, a Comcast executive wrote a blog post stating, "We [Comcast] don't prioritize Internet traffic or have paid fast lanes, and have no plans to do so."

The change in wording this time around suggests that Comcast might have changed its stance on paid prioritization.

© Flickr / Stephen Melkisethian
Net Neutrality is Back in Court

"A lot of African Americans and Latinos access the internet through their phone. There is a growing population, predominantly in the black community and in the youth — those between the ages of 18 to 22 — that rely on their phones to access the internet," Garrafa explained, adding that abolishing net neutrality could impact these groups' abilities to get jobs and apply to certain services online.

Garrafa ended on a hopeful note, however, exhorting listeners to take action.

"I would encourage people to go on the FCC website and make public comments. You can also go to the Electronic Frontier Foundation, a nonprofit organization that promotes internet civil liberties, to find out more information to get in touch with your representatives in Congress, and join protests against destroying net neutrality," Garrafa said.