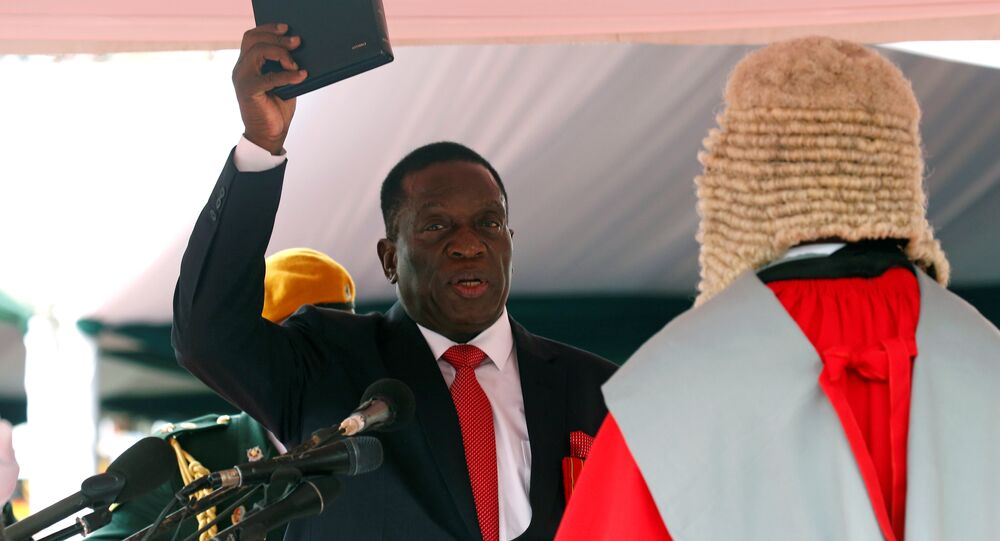 Zimbabwe President Emmerson Mnangagwa’s economic policy promises, which he revealed during his inauguration last week, will bring little economic benefit to the country, as it will be difficult to fulfill the promised job creation and attraction of foreign investment, representatives of the Zimbabwean opposition parties told Sputnik.

MOSCOW (Sputnik) — Mnangagwa, the former vice president of Zimbabwe, was officially sworn in on Friday as the new president of the country at the National Stadium in the Zimbabwean capital of Harare. He replaced Robert Mugabe, who had been in power for 37 years. At his inauguration, Mnangagwa addressed a crowd of 60,000 people, outlining a number of promises regarding the economic goals which he intended to achieve during his presidency. Mnangagwa mentioned job creation and increase in foreign investment as some of the potential areas of improvement.

© REUTERS / Mike Hutchings
Activists Pessimistic About Human Rights in Post-Mugabe ‘New Zimbabwe’
According to the World Bank, Zimbabwe has the potential to recover from poverty and lack of economic growth. However, this potential would only be realized if Zimbabwe’s government could effectively reform its fiscal policies to bring changes to economy sectors singled out by Mnangagwa.

Mnangagwa claimed during his inauguration that he would improve the economic situation in the country by focusing on job creation, but opposition party members are skeptical he could effectively fulfill this aim.

Presidential Economic Policy Adviser for Zimbabwe First party (ZimFirst) Jonathon S James believes that Mnangagwa cannot isolate job creation in his bid to improve the country’s economy. Instead, a more holistic approach and concerted effort on all areas of the struggling economy is necessary to make Zimbabwe prosperous.

"Job creation is one thing, but in order to be able to do so, there has got to be a material change in economic plan and structure that invites investment to come in, where they feel that the government is going to operate materially different than they have previously, and that is yet to be seen," James said.

"When we compare the amount of resources our country has, if we do a performance assessment, for the 1995-1996 period for which he was finance minister, Zimbabwe was performing at one fifth of its potential… We have mineral resources, which we failed to refine within our country for export. We only exported raw materials. We have the potential to process all our raw materials and export finished products. We have that potential, and we can see that we need a total economic shift from the policies [of the ruling party, Zimbabwe African National Union – Patriotic Front] have pursued over the years," Shumba said.

One of the ways for Mnangagwa to prove his credentials as a reformer is through fulfilling the promise on attracting foreign investment into the country, where overseas companies currently face problems stemming largely from the cash crisis and foreign currency shortages.

James says that one way to tackle the cash crisis and currency shortages is through restructuring Zimbabwe’s economy so that newly created cryptocurrency is linked to the country’s mineral reserves. This is part of an economic plan that ZimFirst has proposed for Zimbabwe. The initiative is dubbed For-Profit Nation (FPN) and aims to attract foreign investment.

"Digital currency will be pegged to the minerals in the ground… That’s a very radical model that I think international investors and partners will consider as innovative and would want to participate [in it], because they also could own a piece of the country’s wealth in an equity-orientated investment," James said.

© AP Photo / Tsvangirayi Mukwazhi, File
New Zimbabwe President Needs to Reconcile With Foes - Opposition Coalition CODE
However, even if Mnangagwa manages to increase liquidity in the country, it might not be sufficient to attract foreign investment. Shumba argues that foreign investors will be too concerned over his previous policies in Mugabe’s government, particularly as they relate to human rights. The lack of confidence in Mnangagwa will have an adverse effect on foreign investment.

"For the economy to move forward it has to inspire confidence in the investors’ minds, that they will be able to invest and be able to get the rewards from their investment … We don’t know whether [Mnangagwa] will be able to inspire the confidence of investors simply because he has decided to use the law of the jungle — that you can detain people who are accused of a criminal act and torture them, without taking them to the authorities so that they can be in the justice system. So that alone does not inspire confidence," Shumba said.

Mnangagwa was a member of the Zimbabwe African National Union – Patriotic Front (ZANU PF) in the run-up to the second round of the 2008 general election, which was marred by violence, resulting in deaths of over 100 people. ZANU PF allegedly intimidated people who might vote for the opposition party. Mnangagwa was also accused of taking part in orchestrating the Gukurahundi killings, which were a series of massacres of Ndebele civilians carried out by the Zimbabwe National Army from early 1983 to late 1984. Mnangagwa has repeatedly denied these accusations, saying that at the time he was not part of the military.

Despite the fact that Mnangagwa has just recently become the country's leader, opposition parties are skeptical of his potential to become the reformer that Zimbabwe needs.

© REUTERS / Mike Hutchings
Before Military Takeover, Chinese Investment in Zimbabwe Was Dwindling
Elton Mangoma, the leader of the Renewal Democrats of Zimbabwe, says Mnangagwa is unlikely to have any discrepancy in policy opinions from Mugabe, which means no prosperity for Zimbabwe’s economy.

"There has been nothing to show that there were any areas of disagreement with Mugabe apart from the death penalty … I'm not hopeful that Mr Mnangagwa will tame the economy of Zimbabwe quickly," Mangoma said.

According to James, Mnangagwa’s ZANU PF legacy indicates that the only solution to implement reforms will be through a regime change.

"There needs to be a regime change, there does need to be a material re-commitment emphasized for the benefit of the masses, and I think ZANU PF, I’m sorry to say, has clearly not demonstrated that in the 37 years that they have been in power," James said.

Mnangagwa is set to govern the country until the 2018 democratic elections in Zimbabwe.