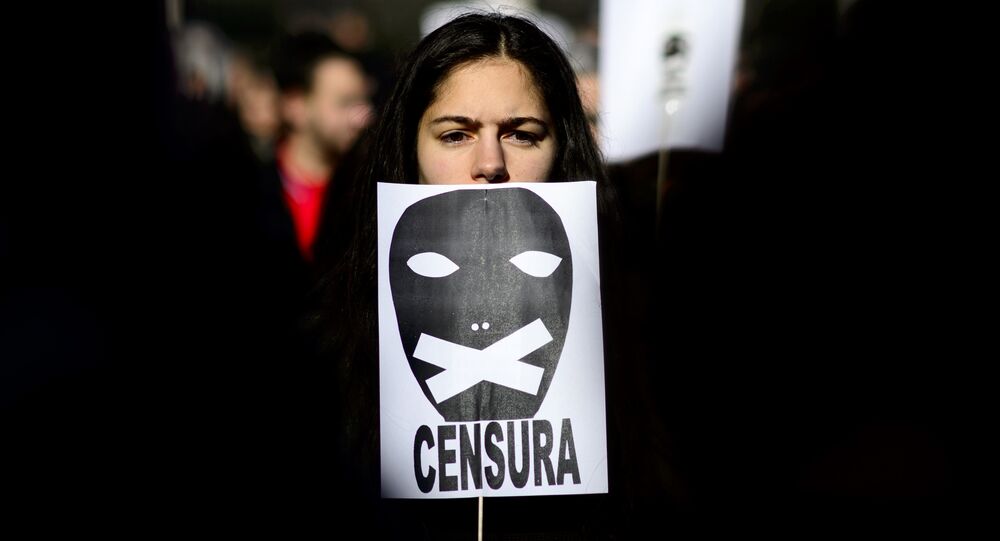 Sputnik: What do you think about the establishment of the unit countering the so-called Russian propaganda and what exactly is it understood by propaganda and who has the authority to decide such things, Eric?

Eric Van de Beek: Yes, this unit is already with us since 2015, it's the East StratCom, Latvia. The EU Parliament adopted a resolution to tackle Russian propaganda by enforcing the East StratCom among other things. The European Federation of Journalists (EFJ) and also the International Federation of Journalists (IFJ) have spoken out against this resolution. I fully support what they said. Their president, Philippe Leruth of the IFJ issued a statement in which he said he did not believe that censorship, harassment and demonization are the right answers to counter so-called propaganda. Rather he said that he believes in ethical journalism, self-regulation, media pluralism and media literacy to face it. Also Ricardo Gutiérrez, [General Secretary] of the EFJ, complained that the authors of the EU resolution have not even consulted the EFJ although it's the main journalist organization in Europe.

Sputnik: Now if we look at the European countries top freedom of press ratings can those ratings be trusted and how impartial are Western nations in their news coverage do you think?

Eric Van de Beek: Well, I think it's impossible to rate the freedom of press, it is fake science. I've done research on the methodology used by the two main ranking organizations — it's Reporters Sans Frontières based in Paris and also Freedom House which has offices in New York and Washington. You can look at the article I recently wrote for Russia Insider and titled "Press Freedom in Russia." The thing is, both ranking organizations based their concluding only on questionnaires filled out by experts. It's totally unclear who these experts are and how the questionnaires have been filled out. I asked for the raw data but I received nothing of importance. Also both Reporters Sans Frontières and Freedom House are funded by state actors and state-fund NGOs. One might ask: Why are state actors so keen on financing ranking organizations? Could it be there is a political agenda behind it? Of course, things would have been totally different if Reporters Sans Frontières and Freedom House were grass-root organizations managed by journalists like, I've just mentioned, the European Federation of Journalists. Unfortunately, that's not the case.

As for your question how impartial the Western media are in their press coverage, if the Western media, and I stress, if the Western media and especially if the European media are as free as the rankings indicate than certainly this freedom hasn't led to a diverse or 'pluriform' media, at least I do not see much diversity in the Western mainstream media. For example, you won't find a paper supporting the Syrian [Arab] Army in its struggle to get rid of ISIL [Daesh] and al-Qaeda nor will you find papers defending the reunification of Crimea with Russia. You only find such opinions in the alternative media. In these media the articles are written by citizens and journalists, like me, in their spare time without earning a penny, that's the case.

Sputnik: And specifically, Eric, how biased is East StratCom do you think?

Eric Van de Beek: It's totally clear to everyone [that] the East StratCom is very biased, it is fully committed to countering Russian ‘fake news.' Why this obsession with fake news from Russia? It's clear there is a political agenda behind this.

Sputnik: And who is benefitting from tarnishing Russia's image and in what way do you think?

Eric Van de Beek: Well, it's guessing, of course, but many actors are benefitting from demonizing Russia, NATO for one. NATO needs Russia as an enemy to maintain its relevance; secondly, the arms manufacturers and cyber-security industry; thirdly, those in Brussels desperately trying to keep the EU together by designating a common enemy. And last but not least those forcing regime change in Russia, those who think they would financially profit from Russia if the country surrenders to the global elites like it did in the 1990s under [Russian President] Boris Yeltsin.

Sputnik: And finally what is your take on Washington's pressure on the Russian media as in the case with FARA and what perspective do such steps, do you feel, put the freedom of speech into question?

Eric Van de Beek: I think it's the most disturbing in the US and also it now seems in the EU we are rapidly moving towards George Orwell's "1984" with the Ministry of Truth suppressing the freedom of information. As I see, RT and Sputnik very much contribute to the diversity of the international media, they are, maybe, selective in their reporting but so is the BBC, CNN, Euronews, or Al Jazeera. People should have access to all these channels to enable them form their own opinion on all things.