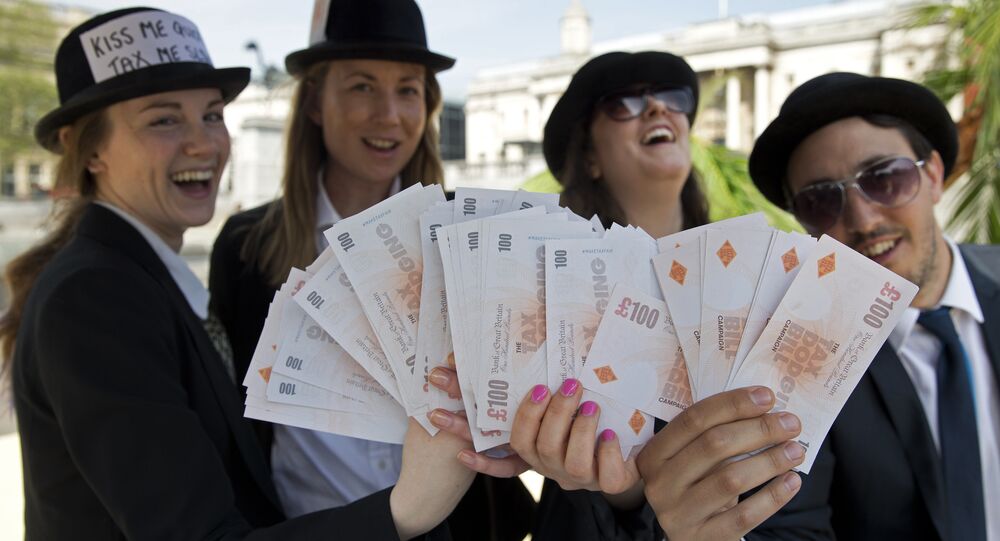 The British government has been accused of acting soft on preventing tax avoidance, as it has tried to block attempts by the EU to include British overseas territories in a tax haven blacklist.

The British government is under pressure following its failed bid to block the EU from taking steps in naming overseas territories in a tax haven blacklist. In Brussels, UK ministers fought to prevent the EU from sending letters informing 12 countries that they would be listed unless they promised to change their tax rules.

Dr William Vlcek, Senior Lecturer in Global Political Economy at The University of St Andrews, told Sputnik that "the UK is not much different from many other developed world economies."

Sputnik: To what extent is Britain becoming an international tax haven?

© REUTERS / Dado Ruvic/Illustration
UK Corporate Tax Breaks Draw Fire From EU as 'Hard Brexit' Looms
William Vlcek: It’s hard to gauge the overseas territories that have had these financial centers for several decades now. The city of London has been accused of facilitating these operations, but really the UK is not that different from many other developed world economies, like the US, with problems concerning companies registered in the state of Delaware. However, the UK has been doing a little bit better compared to the US; its variations in their tax laws that allow this success, but there’s been a much-increased focus in the last two parliaments in addressing these issues following on from the Panama papers and the most recent paradise papers in approaching these issues.

Sputnik: What real commitments have we seen from the current government, that they are committed to tackling tax avoidance? A practice that costs the UK economy billions each year…

William Vlcek: There has been a number of new initiatives… The autumn budget for example pledges increased efforts to try and tax the digital economy; the large corporations like Google, Facebook etc. that are using intellectual property as a way to transfer their profits of the UK to jurisdictions that don’t tax their corporate income, at that point.

Sputnik: Could tax avoidance become more rampant with the UK being used as a base for these activities post-Brexit?

William Vlcek: There’s certainly been a concern that it [tax avoidance] could increase post-Brexit because of the nature of the relationship between a post-Brexit UK with the EU and whatever extent of influence it may have with international partners in the G20 and the OECD in dealing with some of these tax issues.