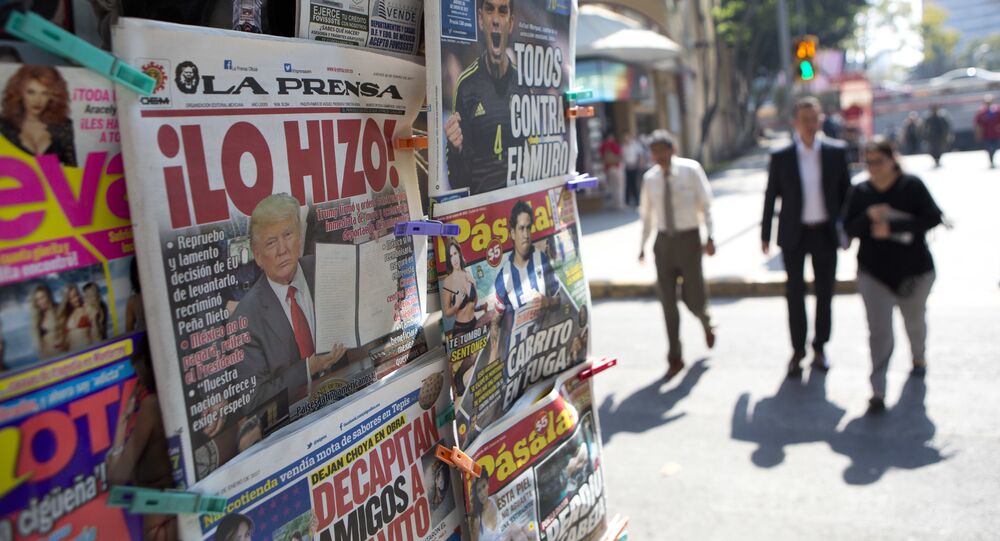 The rumors of Russia's alleged intention to interfere in the 2018 Mexican presidential elections are completely groundless and ridiculous, Carlos Figueroa Ibarra, researcher at the Benemérita Universidad Autónoma de Puebla, told Sputnik, dropping a hint as to who could be behind the rumors circulated by the Mexican press.

The suggestion that Russia wants to meddle in the upcoming presidential elections in Mexico is nothing but "black propaganda" aimed at the demonization of Russia and its leadership, Carlos Figueroa Ibarra, prominent sociologist and researcher at the Benemérita Universidad Autónoma de Puebla, told Sputnik Mundo.

"I am laughing at these accusations, because they are truly ridiculous," the sociologist said.

The researcher added that such an attitude toward Moscow is a kind of "atavism" and recalled that during the Cold War era the West routinely pointed the finger at the USSR for what happened in Latin America.

Additionally, Russia has been subjected to the attacks since it is advocating "multilateralism in international relations" which does not fit into the strategy of those who still promote the concept of US dominance, the academic noted.

© Sputnik / Ilya Bogachev
Mexico Mulls Buying Over a Dozen Russian Ansat Helicopters by 2020
He stressed that the claims that Russia seeks to influence the elections in Mexico to put an opposition candidate hostile to the US into the presidency are completely groundless.

Presenting no evidence to back his claims the journalist insisted that Russia "has intervened, in different ways, in the elections in the United States, in the vote for Brexit, in the Italian referendum, in Germany, Ukraine, Austria, France, Finland, the Netherlands… and, more recently, in the Catalan referendum," adding that Mexico is about to be the next in the list.

"Why would the Russians have an interest in intervening in the Mexican electoral processes?" Fernando Garcia Ramirez asks. According to the journalist, the answer is simple: Russian President Vladimir Putin is seeking nothing less than "putting authoritarian populists" into power all over the world.

The journalist went even so far as to claim that Moscow has chosen opposition politician Andres Manuel Lopez Obrador as "its candidate."

According to the commentator, the National Electoral Institute of Mexico is "strengthening all its cyber security systems." He cited a mysterious "document", which allegedly reports that "Russian hackers" are fully prepared to break the Mexican election system.

As if it could back his claims, the journalist referred to the fact that the website votoextranjero.mx, created to enable Mexicans to vote from abroad, is visited by users from Russia.

Quoting sources, who "asked for anonymity," Javier Tejado Donde writes that there is a risk that on "the night of the election, the electronic page showing preliminary results can be altered," which would throw into doubt the 2018 presidential vote.

The ill-founded assumptions have once again surfaced during the official meeting between Russian Foreign Minister Sergei Lavrov and his Mexican counterpart Luis Videgaray Caso, who was in Russia on a two-day official visit.

One of the journalists asked the officials to comment on the reports about the "hand of the Kremlin," that wants to put its "own man" at the helm of the Caribbean state. "We do not have any evidence to back this theory," Videgaray replied.

© REUTERS / Edgard Garrido
Canada, Mexico Seem Reluctant to Rebalance NAFTA Deal - US Trade Representative
For his part, Lavrov denounced the rumors as baseless. According to the Russian foreign minister, those who are spreading them try "to stir up Russian-Mexican relations, especially at a time when they are developing progressively and positively." In addition, Lavrov openly outed the alleged "source" behind these reports — the United States.

Ahead of the talks the Russian foreign minister told journalists that Mexico is one of Russia's traditional partners among the Latin American and Caribbean countries, and Moscow is interested in further strengthening bilateral cooperation.

In particular, Lavrov stressed prospects for cooperation in aviation, energy and shipbuilding, as a Russian-Mexican joint commission on economic, trade, science and technology cooperation, as well as sea navigation, would contribute significantly to unleashing the potential of bilateral trade and investment ties.

From the 'Rhetorical' Wall to NAFTA, Mexico Has Always Prioritized Trade With US