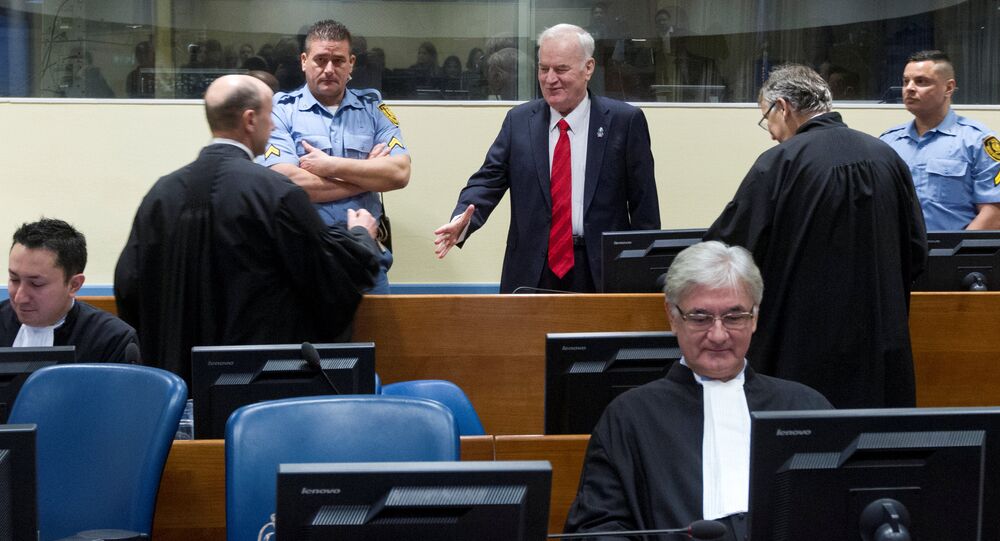 The trial of Ratko Mladic is just one example of the unfair targeting of Serbs by the International Criminal Tribunal for the Former Yugoslavia (ICTY), which was set up to try alleged war crimes committed during the 1990s; "nobody, nowhere has been tried so much, except for the mafia in the US," Serbian lawyer Toma Fila told Sputnik Srbija.

On Wednesday, the International Criminal Tribunal for the Former Yugoslavia (ICTY) found Ratko Mladic guilty of atrocities committed during the 1992-1995 war in Bosnia, including the Srebrenica massacre, and sentenced the former Bosnian Serb commander to life in prison. Mladic, 74, denies all the charges and his son Darko told reporters that he will appeal the verdict.

Commenting on the case to Sputnik Srbija, Serbian lawyer Toma Fila said that the verdict handed down to Mladic was not a surprise given the sentences handed down to other Bosnian Serb army officers by the ICTY  in The Hague.

"He was convicted of genocide in Srebrenica, but he was charged with genocide in several more places in Bosnia and Hercegovina and wasn't convicted," Fila said.

The three-judge panel headed by Presiding Judge Alphons Orie found Mladic guilty on ten of 11 counts, including the massacre in Srebrenica. Mladic was found not guilty on a count of genocide allegedly carried out in six other Bosnian provinces.

"What he was found guilty of in these provinces, murder and violence and so on, had already been pronounced in judgments against Bosnian Serb army officers who were tried for Srebrenica, and was transferred to the verdict on General Mladic. In fact, for what he was convicted of today, he had already been convicted in these earlier sentences that were handed down to others," Fila explained.

© REUTERS / Peter Dejong/Pool
Ex-Bosnian Serb wartime general Ratko Mladic appears in court at the International Criminal Tribunal for the former Yugoslavia (ICTY) in the Hague, Netherlands November 22, 2017
"As we see, Mladic is being held responsible for the death of any Muslim who was killed on the territory of Bosnia and Hercegovina, where there was Republika Srpska army units and where there weren't. All this is because of the legal doctrine of "Joint criminal enterprise," a formulation which was invented exclusively for the Serbs."

"Nobody, nowhere has been tried so much, except for the mafia in the US, and even that was [only] before 2006," Fila said.

"In the new tribunal (established in The Hague, apparently to try the crimes of the Kosovo Liberation Army — ed.), there is no such thing as a 'joint criminal enterprise' because it is something legally absurd. But thanks to the application of this formulation, General Mladic is responsible for everything that happened in Bosnia and Hercegovina, regardless of whether he was there or whether he knew something."