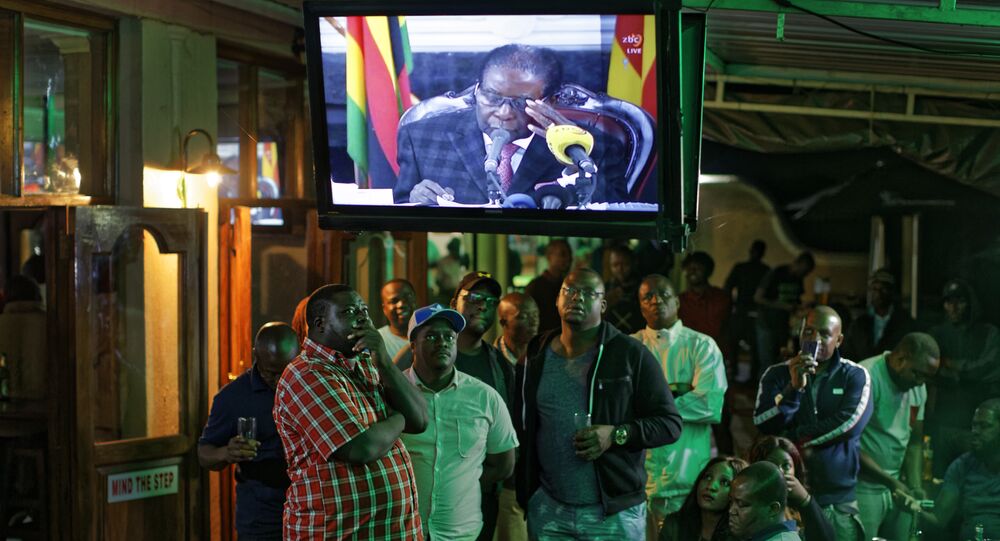 Zimbabwe's long-time leader Robert Mugabe, 93, has announced his resignation after the ruling party kicked off the process of his impeachment earlier on Tuesday. The news has been met with excitement in the Parliament where the former President's letter was read amid mass celebrations in the streets of Harare, the country's capital.

Mugabe's resignation comes after what has been called a soft coup, with the military forcing him into home arrest in mid-November. Announcing a "bloodless transition" of power, the country's ruling party gave the then-leader till November 20 to announce his resignation. Following Mugabe's failure to meet the ultimatum in time, the party decided to begin impeachment proceedings which were then halted Tuesday evening.

In an interview with radio Sputnik, Lance Guma, an exiled Zimbabwean journalist based in the United Kingdom and the Managing Editor of Nehanda Radio and Nehanda TV, commented Mugabe's departure from power.

Sputnik: How has the announcement been received in Zimbabwe?

Lance Guma: There is jubilation all around in Zimbabwe. Not many people thought they’d live to see this day. We’ve had the same president for 37 uninterrupted years… People are pinching themselves to see whether they are dreaming or not. This is a new era for Zimbabwe. It’s what I would call anxious excitement, because… fine, it’s Mugabe resigning. But clearly, the person that is taking over from him is someone that has been his friend for over 50 years. So it could simply be a political software upgrade from Mugabe 1.0 to Mugabe 2.0.

Sputnik: What changes should we expect to see in Zimbabwe from this change of the President?

Lance Guma: What we’ve seen so far is the [former First] Vice President [Emmerson Mnangagwa], who is likely going to succeed Mugabe, has warmed up to big business. The war veterans who support him have been making noises trying to welcome Zimbabweans, the diaspora who has fled the country. He was especially warm to us, journalists, saying [that] all these laws that we’re banning foreign correspondents from reporting in Zimbabwe are going to be lifted, journalists will be allowed to do their work. So they are certainly making all the right noises, but it remains to be seen whether this was just being said to have people’s support. They pushed to remove Mugabe. So we wait to see what the new administration does when they take power.

Sputnik: Are you surprised that this power change has been able to go through without any bloodshed?

Lance Guma: Yeah. It’s quite surprising that this military coup has actually been more peaceful than our own elections. It’s quite amazing that it’s actually taken the Army — a key pillar of support for Mugabe, by the way: we’ve had a lot of abductions, a lot of political violence, a lot of people being killed, and the Army was involved as they kept Mugabe in power. So the key pillar of support has now brought him down. But all this can be traced to Mugabe’s wife. I think she was, in the end, his downfall. She kept insulting members of the army, she kept poking the generals, challenging them to come and shoot her. So eventually, it was pretty obvious how this was going to end. I think in the last month or so what has happened in Zimbabwe was pretty much inevitable.

Sputnik: How would you describe Mugabe’s legacy?

© AP Photo
Zimbabwe Coup Leader Traveled to China One Week Before Arresting Mugabe
Lance Guma: It’s a bit of a mixed bag because when he started out he was celebrated across Africa and the world for advances in education and he pronounced a policy of reconciliation, independence in 1980. When the former enemies were embraces… We even had the former Prime Minister being allowed to stay on his farm without any threats. So he was celebrated for that policy of reconciliation, education; [he] built lots of schools. But as he became increasingly unpopular, because of economic policies and corruption,  he resorted to violent means to remain in power. So as he became more and more unpopular, he became more and more ruthless. And so you have this mixed legacy where somebody starts off ok and is celebrated, but eventually just becomes a despot. He was almost Hitler-like! In the 80’s, we had close to 20,000 people massacred in the [western] region of the country. It’s a mixed bag, but I think he’s going to be remembered more for his ruthlessness and brutality.

Sputnik: And how significant has been the engagement of other African countries, notably South Africa? They’ve been sending senior officials to Zimbabwe, to enter into talks with the Army and with Mugabe himself. How important has that been?

Lance Guma: We’ve seen today some of the ministers who were in Army custody, it looks like they were released. Some of them posted pictures of themselves on the plane. <…> I think South African President Zuma certainly played [a] role securing the release of these detained officials. They belong to a faction that was supporting the First Lady in her bid to become president. So I certainly think they played a key role. But also it’s important to know that this man is nearly 94 years old. I think the surrounding countries and neighboring countries would have looked idiotic had they tried to intervene militarily on behalf of such a man who’s way past his sell-by date, really.

Sputnik: And finally, where now for Mugabe? What does he do after this resignation?

Lance Guma: It’s not clear what the terms of the deal were. I think he had been given an option between impeachment and resigning with dignity. He refused to resign, and today was all about the impeachment. But we understand, I think, the impeachment might have been stopped after his resignation. So we don’t know whether the immunity deal is still on the table. He had insisted on immunity, and him and his wife being allowed to keep their money and private properties. So I do not see the new administration victimising him and his wife, because they had been friends for such a long time, which was a complication in this deal, by the way. When you have two parties that share so many secrets, it’s very difficult to be vindictive. So I think they’ll just ease him out gracefully and just forget about him.