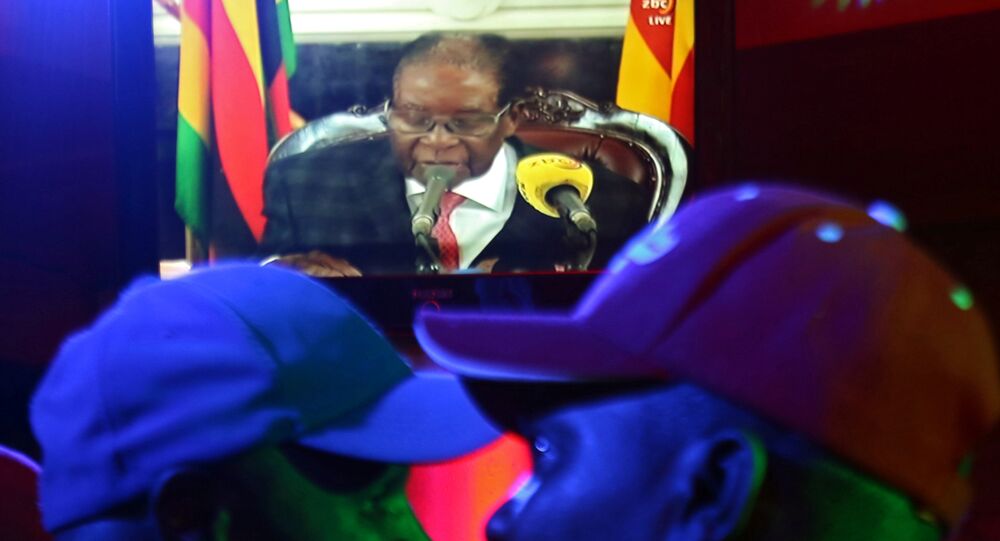 Standoff in Zimbabwe: 'Mugabe Would Protect Legacy by Stepping Down Voluntarily'

Zimbabwe's parliament is set to start impeachment proceedings against President Robert Mugabe as regional leaders, former vice president Emmerson Mnangagwa and his own ruling party have all urged him to step down. African politics expert Lloyd Msipa spoke to Sputnik about the embattled president's next move.

The 230 members of the ruling Zimbabwe African National Union-Patriotic Front (ZANU PF) are set to initiate impeachment proceedings against the long-serving president on Tuesday, according to media reports.

Sputnik: Can you describe the current political situation in the country?

Lloyd Msipa: There have been other developments taking place over and above the impeachment exercise. We've had the Zambian president and other regional leaders speaking to Mugabe [about stepping] down. As of yesterday, he has also requested to speak with his former vice president, Emmerson Mnangagwa. So there is a possibility that he may step down before the impeachment exercise is finished, and everyone is hoping that that happens, because that will help protect his legacy as well. We are all praying that he does the right thing and steps down.

Sputnik: If Mugabe does step down on his own, or at least appears to do so publically, is that going to secure a bloodless transition of power in the country, or is the situation leading to an armed standoff?

Lloyd Msipa: If Mugabe stands down, what that would do is instill confidence in the Zanu PF Party; they would put forward a candidate who will take up the position of acting president for 90 days. Mugabe right now is the elephant in the room. If he steps down, it opens up all avenues and possibilities for Zimbabweans in general.

Sputnik: Does this mean that anyone will theoretically be able to become president? Or are the elements of the ruling elite and clans fighting for the spot and for the tasty bits in the government?

Lloyd Msipa: As a democracy, obviously anybody within the party can campaign and become president, but at this point the frontrunner happens to be the former vice president, Emmerson Mnangagwa. The party met and made him acting leader of the Zanu PF. So essentially he becomes the presidential candidate of the party. He has the support of the army, he has the support of the people – there are people marching who support him. Westminster has endorsed him, and I understand Moscow and [Washington] are also happy with him. So everything is pointing to Mnangagwa as Mugabe's possible successor.

Sputnik: Do you believe he would be able to run the country a little differently?

Lloyd Msipa: Definitely. The man is a liberal – more global in his outlook. During his time as vice president, he made a lot of changes. For instance, we've had a lot of investors from China and Russia in the mineral sector [at Mnangagwa's initiative].

Domestically, he's initiated what we call a command agriculture policy, where agricultural output has doubled. So he's a progressive man; he's likely to reverse most of the policies that were very unpopular that Mugabe put in place and move the country forward. He's definitely a more open-minded man.

Sputnik: What kind of a transitional arrangement can there be during this effort for Zimbabwe to emerge from the crisis? How long is it going to be until we see the country in the international arena as a flourishing democracy?

Lloyd Msipa: If Mugabe stands down now, there's a possibility that Mnangagwa will take over. As a liberal, I see him reaching out to the opposition, and forming some kind of national unity government that will look at fixing the economy, and not dealing with the issues of politics or elections. Because remember, Zimbabweans have been dealing with the issue of politics for a very long time. Politics have been the elephant in the room. It's time we put away the politics and deal with the economy.

I see him reaching out to [opposition leader] Morgan Tsvangirai and his party, and the other small political parties to form a government of national unity that can perhaps last for three to five years while we work at fixing the country, and dealing with the elections later. That will ensure stability in the economy as well.

It's not in anyone's interest for elections to take place next year. It's not in Mnangagwa's interest, because he needs to unite Zanu PF.

Sputnik: Can you tell us what's happening on the ground right now? We've seen videos of people celebrating and dancing. What's the situation there? Is it tense, or are things calm and peaceful?

Lloyd Msipa: One thing about Zimbabweans is that they take everything in stride. There's a lot of humor going on, a lot of WhatsApp humorous messages [about the political standoff]. Because people know that either way, Mugabe's going. They know that all the members of parliament have come together and they will impeach him. Everybody's actually looking at Mugabe as gone already. It's probably just him who thinks he's still president. The rest of the nation is looking at him as former president of Zimbabwe.

On Sunday, ZANU PF leaders suspended Mugabe from his post as the party's leader, and urged him to resign from the presidency by Monday. Mugabe refused to do so in an address to the nation later in the day. Last week, Zimbabwe's military took control of the television center in Harare and put Mugabe under house arrest.