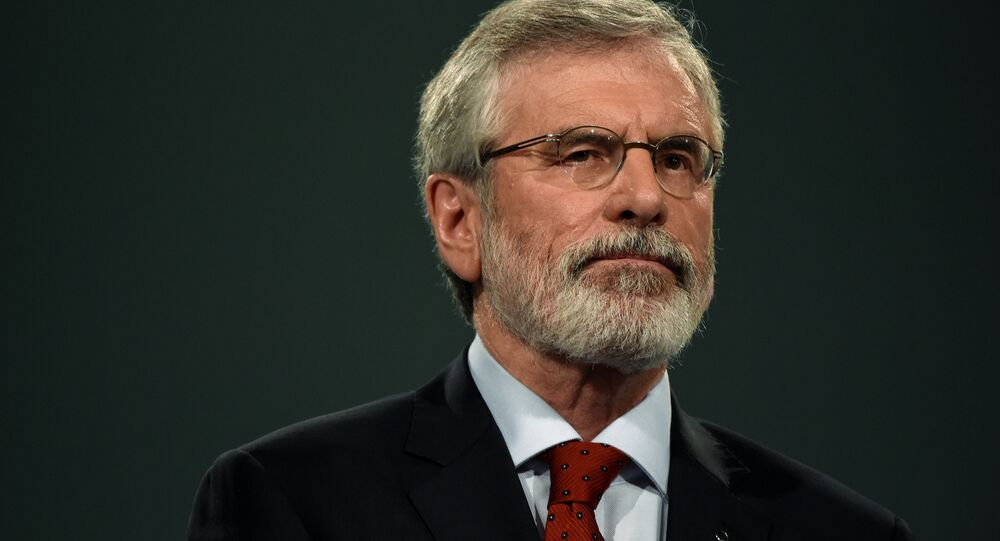 A University of Manchester professor told Sputnik that the Irish Liberation Party is to benefit from the resignation of its 'Troubles linked' leader and the shift towards a younger candidate without a 'war record.'

Mary Lou McDonald has emerged as the front-runner in the race to lead the Irish Republican Party 'Sinn Fein' after long-time head Gerry Adams announced his intention to resign in 2018 on November 18.

Some 2,500 Sinn Féin delegates sing ‘Oró sé do bheatha bhaile’ at #SFAF17 as Gerry Adams announces he will be stepping down as leader of Sinn Féin in the coming months — a seminal moment in the history of Irish republicanism #SlanAChara pic.twitter.com/eR4F7gyah9

​The representative for Dublin Central would be the first woman to head the party since 1937 and unlike Mr. Adams, who hails from Northern Ireland, is from the Republic of Ireland itself.

Sinn Fein deputy Michelle O'Neill from Northern Ireland, where the party is also active in politics, November 20 ruled herself out of the running to succeed Mr. Adams as leader.

Roger MacGinty, Professor of Peace and Conflict Studies at the University of Manchester told Sputnik that Sinn Fein is looking to broaden its appeal in the Republic of Ireland where it currently holds 23 out of 158 seats in the Lower House of Parliament and 7 out of 60 Senate seats. Mr. Adam's resignation itself, Professor MacGinty says, is part of this strategy.

"In the minds of many voters in the Republic of Ireland he is a northerner who is inextricably linked to the Troubles. So it would be likely to help Sinn Fein's image if he were to step down. He probably realized that."

The ascension of Mary Lou McDonald would continue a generational transition within Sinn Fein, from members who were active during 'The Troubles' — a period of intense conflict with the British Government from the late 1960s to the late 90s — and much younger members.

"We remain committed to full power-sharing in the North, to shared democratic institutions, to achieving an agreement on the basis of respect, equality and integrity… when agreements previously entered into are honoured," @MaryLouMcDonald tells #SFAF17 in Dublin. pic.twitter.com/uWJO4iQmby

"Martin McGuinness is dead and a large number of senior figures in Sinn Fein who were prominent during the Troubles and peace process have retired. Most elected Sinn Fein politicians don't have a 'war record.' Adams, who once was a young buck in Sinn Fein, is now an elder statesman in the party," Professor MacGinty added.

Prior to Adams' announcement of his resignation, the party had agreed at its conference that it would participate as a junior partner in a future coalition government in the Irish Republic, in a major departure from its previous stance according to Professor MacGinty.

Some of Ms. McDonald's statements have proven controversial in the Republic of Ireland including her refusal to disavow atrocities of the Irish Republican Army (IRA).

"No party dissociates themselves from what they are and where they've come from. I'm very proud of who we are," she said in a statement to the Irish Independent published November 17.

The other major name in the race was Glasgow-born Pearce Doherty until he also withdrew his candidacy on November 20.