The US-led coalition's controversial behavior on the ground in Syria, including alleged cases of evacuating Daesh (ISIS/ISIL) field commanders, could be explained by the fact that US-backed rebels and radical elements have mixed to a large extent with the Islamic caliphate in Syria, a CIA veteran and Israeli political commentator told Sputnik.

The Russian Ministry of Defense (MoD) report of the US' unwillingness to strike at Daesh (ISIS/ISIL) jihadists fleeing the Syrian city of Abu Kamal and the BBC's story of terrorists leaving Raqqa "under the gaze" of the US and British-led coalition have once again raised the question whether the Americans are colluding with the Islamic caliphate in Syria.

What could be behind this inexplicable behavior?

'There is No Collaboration With Daesh in Any Direct Way'

Philip Giraldi, a former counterterrorism specialist and military intelligence officer at the CIA, underscored that "there is no collaboration with Daesh in any direct way": Most probably, the groups backed by the US have mixed together to a large extent with terrorists on the ground.

"Centralized command and control of the various rebel groups has broken down and the groups are now mixed together in shrinking enclaves," the CIA veteran told Sputnik. "The US is trying to maintain some credibility on the ground by separating out the rebels that it and the Western powers have been supporting and establishing them along a new front so they will represent a plausible presence when serious negotiations about a final settlement of the fighting take place."

© AFP 2019 / JOSEPH EID
Alleged Daesh Evacuation by US May Prompt 'Political Earthquake' if Confirmed
Giraldi believes that Washington's "Assad must go" agenda is not off the table: "As US policy continues to be the removal of al-Assad some kind of credible presence is essential to maintain that facade."

According to the former CIA official, "everyone in Washington knows that the wheels have come off the wagon and that the US presence is now and largely will continue to be irrelevant to what comes next, but the military and the Trump administration are keen to demonstrate that they are still active players even if they are not."

Indeed, on Monday, Defense Secretary Jim Mattis asserted that the US military will remain in Syria "as long as [terrorists] want to fight."

"We're not just going to walk away right now before the Geneva process has traction," Mattis added as quoted by Reuters.

© AP Photo / APTV
US' Plan B? From Alleged Evacuation of Daesh to the Murder of Russian General
Commenting on the Russian MoD report, Israeli political commentator and publicist Avigdor Eskin remarked that "it is not an easy task to pass judgment on a certain specific event that has not been thoroughly investigated yet," reiterating his stance shared with Sputnik on the supposed evacuation of Daesh field commanders from the Deir ez-Zor province in late August.

"However we can refer to the situation in a more general approach. One must realize the complexity of the whole Syrian picture. Many alliances and rivalries there are subjected to quick changes," Eskin, who had been involved in international counterterrorism activities from 1987 to 1994, told Sputnik.

The Israeli commentator emphasized that the US policies in Iraq and Syria differ: "While the Shiite factor in Iraq is considered by Washington to be rather positive, including the role of Iran in destroying ISIL [Daesh], their attitudes in Syria are not as clear."

Eskin pointed out that the US regards Iran's presence in Syria "in a very negative light"; at the same time Washington's attitude towards Bashar al-Assad has not become better, although today it is "rather skeptical and less hostile."

"We know from US sources about the CIA operation of supporting the opposition, which included some radical elements alongside the legitimate forces," Eskin said. "President Trump stopped it totally, but we can presume that some radical groups who had ties with the CIA are still protected somehow."

Like the CIA veteran, Eskin also believes that there was no direct support of Daesh on the part of Washington, however, "we can guess that some of these terrorists were among those who contacted Americans without being identified as ISIL [Daesh]." 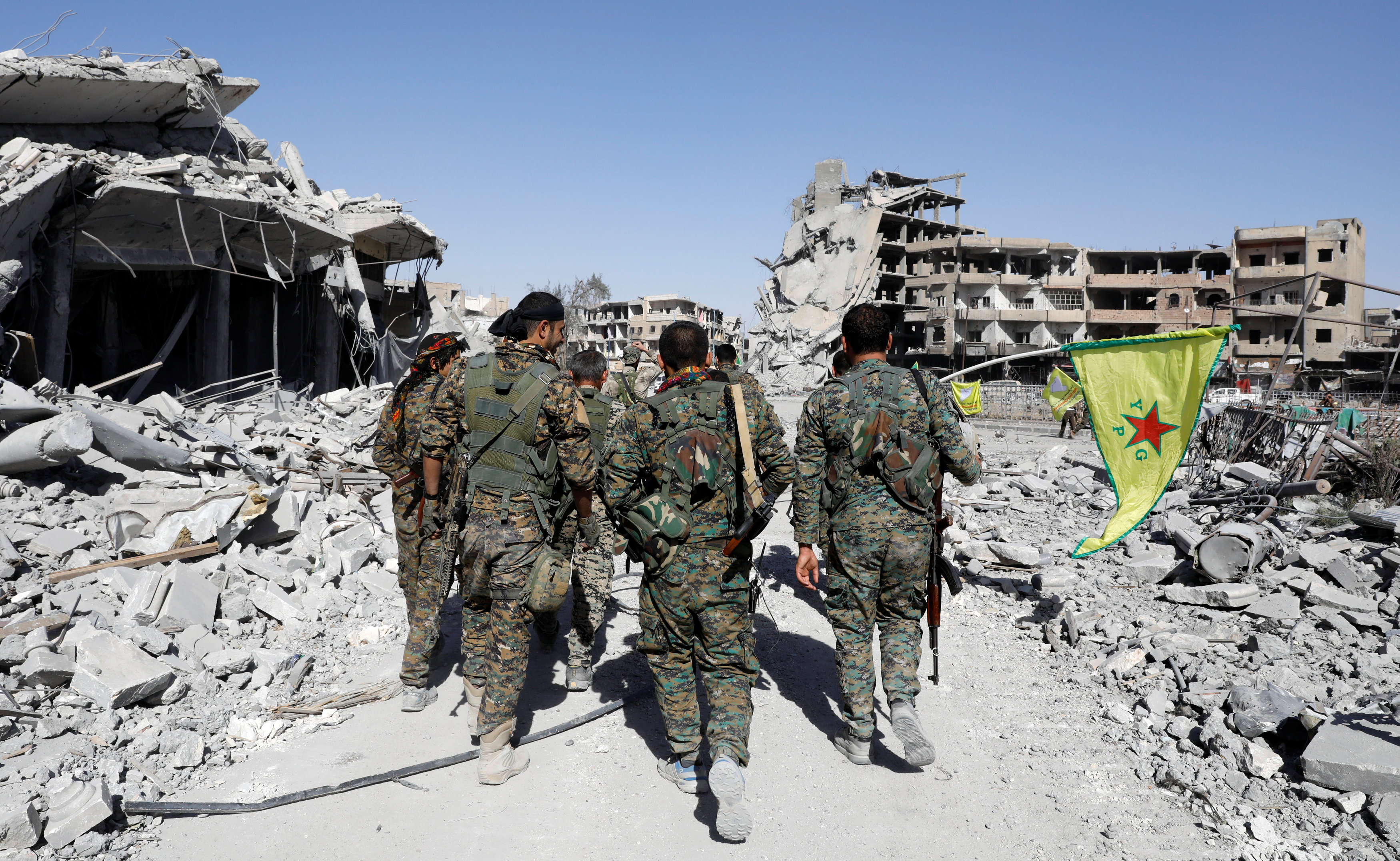 In any event, the controversial developments emphasize the need for closer cooperation between Russia and the US, the Israeli publicist highlighted, adding that it is "America's fault that the military coordination is so limited." 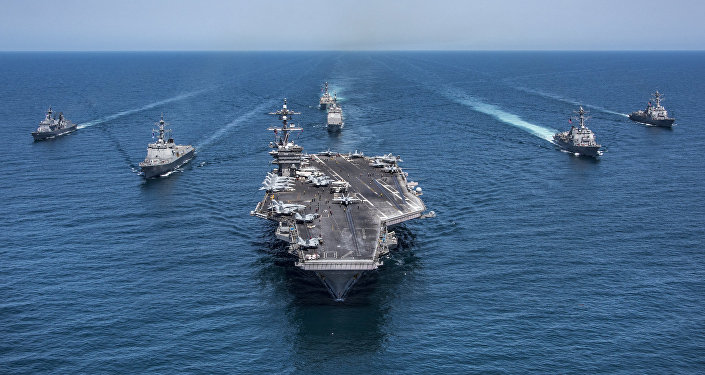 © AP Photo / U.S. Navy
Peace Activist: Power and Influence of Armament Industry in US Exceeds That of Presidency
In contrast, "the mutually beneficial synergy between Russia and Israel is a very good example when two military powers can coexist even when sometimes the goals are different," Eskin underscored.

"The fact that there was not even one military incident between Russia and Israel, can demonstrate the wisdom and the flexibility of the Russian side," he highlighted. "Moscow keeps friendly and constructive relations both with Tehran and Jerusalem [Tel Aviv]. And this is very promising for the overall dark situation of the region."

Meanwhile, a lot of controversy is still surrounding the US-led coalition's actions in Syria. Previously, in early November, several sources told RIA Novosti that US helicopters had transferred Daesh commanders from the town of al-Mayadin before the launch of the SAA advance.

The Syrian government forces operation to liberate Mayadin, once the largest Daesh stronghold in the Deir ez-Zor province, began in early October and ended about two weeks later.

After the liberation of the city the SAA discovered one of Daesh's largest storehouses containing the latest examples of NATO weapons from the United States, Belgium and the United Kingdom.

Earlier, in September, a source informed Sputnik about a strikingly similar episode amid an SAA advance on Deir ez-Zor in August. According to the source, US military aircraft allegedly evacuated over 20 Daesh field commanders and militants close to them. Two of the commanders were supposedly of "European origin."

On September 24, the Russian Ministry of Defense released aerial photographs showing US Army Special Forces and the US-backed Syrian Democratic Forces (SDF) smoothly advancing along the left shore of the Euphrates towards Deir ez-Zor through Daesh formations facing no resistance from the terrorists.

The US Department of Defense (DoD) has repeatedly denied that it had cooperated with the terrorists on the ground in Syria.

When asked if Russia has proof of the US allegedly being in cahoots with the Daesh terrorist group, Russian Foreign Minister Lavrov stated Thursday: "We use facts. We have no proof that there was any collusion."

Lavrov Accuses US, Coalition of Hindering Work of Russian Aviation in Syria