US President Donald Trump continues to push ahead with the militarization of the Asian-Pacific region following in Barack Obama's footsteps, the peace activist founder of "Show Up! America," Jan R. Weinberg, has told Sputnik, emphasizing that the power of the armament industry in the US has seemingly exceeded that of the American president.

The power and influence of what 34th US President Dwight D. Eisenhower called "the military-industrial complex" is bigger than the presidency, Jan R. Weinberg, a US peace activist and founder of "Show Up! America," told Sputnik, commenting on the continued militarization of the Asia-Pacific region.

In the course of his 12-day Asian tour US President Donald Trump convinced Japan and South Korea to acquire more American weapons as protection against Pyongyang.

"President Donald Trump, though he probably would not want to admit it, has followed in President Obama's footsteps — albeit, when it comes to hawking the merchandise of the armament industry Trump comes off a great deal more crass," Weinberg said, commenting on the matter.

© REUTERS / Jonathan Ernst
Analysts Explain How China May Respond to US Push to Militarize Asia-Pacific
It appears that Trump regards the acquisition of the weaponry as a panacea for the Korean crisis.

While in Japan, Trump explained that Tokyo would be able to shoot down North Korean missiles if it simply bought more weapons from the US, something he stressed would also be good for American jobs, the activist recalled.

"National security and the economy should be separated as a matter of course, but I believe that buying US defense equipment will contribute to the US economy and job creation," Abe said as quoted by Asahi Shimbun.

Speaking to Sputnik China, Liu Chao, a specialist on Korean Peninsula affairs at the Liaoning Academy of Social Sciences warned against the Japanese military buildup, stressing that the country's authorities are currently revising the Constitution in order to abolish Article 9 that outlaws war as a means to settle international disputes involving the state.

"Trump may very well be on course which tells us how incredibly dangerous the world has become given that North Korea, Russia and China have not sat idly by," Weinberg noted. 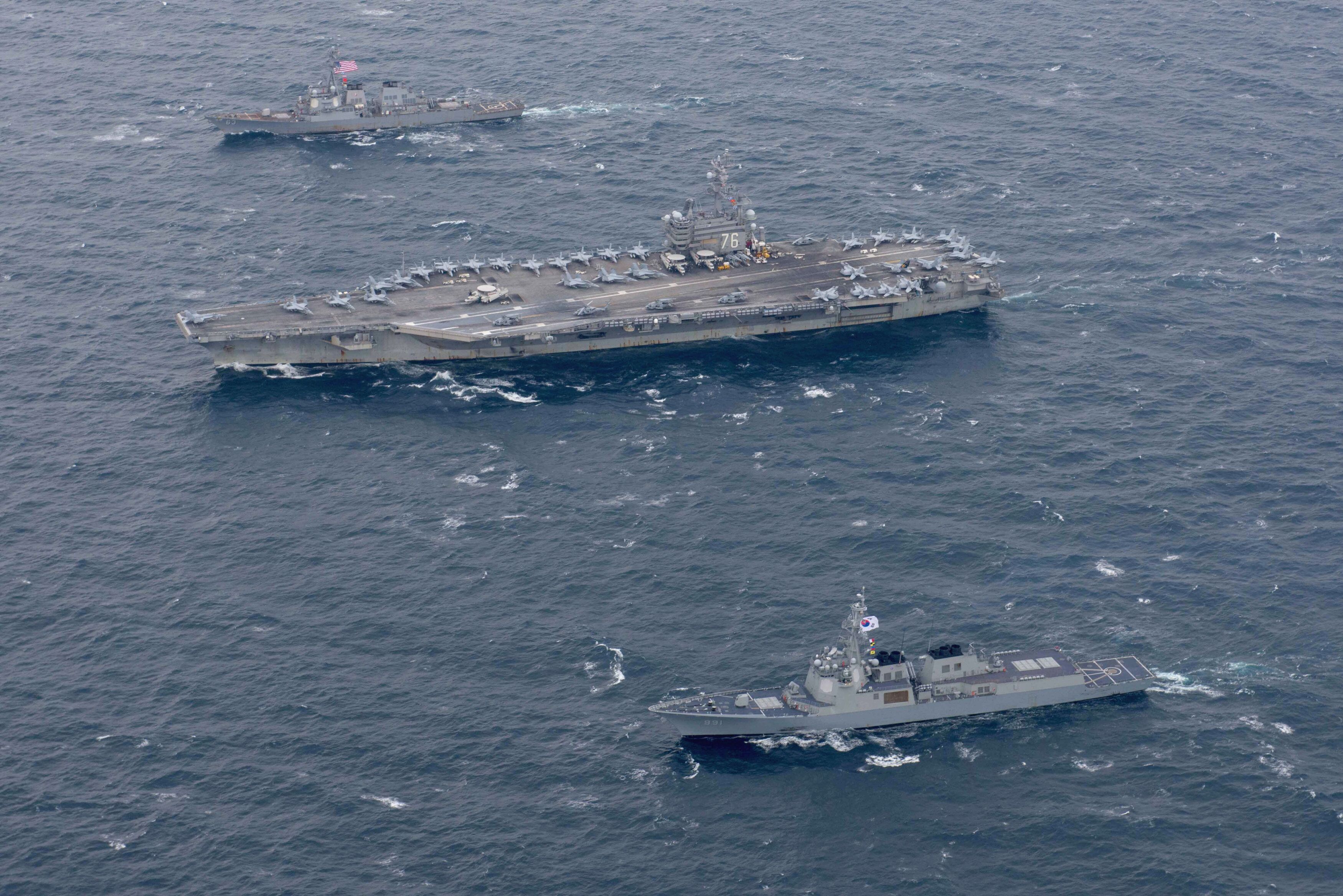 © REUTERS / Courtesy Kenneth Abbate/U.S. Navy
The Navy's forward-deployed aircraft carrier USS Ronald Reagan and the forward-deployed Arleigh Burke-class destroyer USS Stethem steam alongside ships from the Republic of Korea Navy in the waters east of the Korean Peninsula on October 18, 2017

US vs. North Korea: 'Insults Don't Translate Into a Foreign Policy'

Meanwhile, during his recent visit to Seoul, Trump called upon Russia and China to back him over North Korea.

"We are calling on all responsible nations, including Russia and China, to demand an end to the North Korea nuclear threat for peace," the US president told journalists.

Beijing and Moscow propose the "double-freeze" plan, which envisages suspending Pyongyang's nuclear and missile tests and US war games in the region. Will Trump embrace the plan, previously rejected by his administration?

Weinberg remains skeptical about it.

"I cannot fathom if Trump actually has an actual North Korea policy, reason being Trump comes off as if he is still in the campaign trail — only offering invectives in the direction of North Korea's Kim Jong Un and nothing of a substantive nature; merely offering the treats of 'fire and fury,'" the activist said.

Following the "use-of-force" threats, the US president called Kim Jong Un "short and fat" in one of his latest tweets. According to the peace activist, "insults do not translate into a foreign policy."

​"If following up on Obama's gift of the THAAD missile systems to S. Korea and continuing the military exercises then I suppose Trump has a foreign policy toward N. Korea," the scholar remarked. 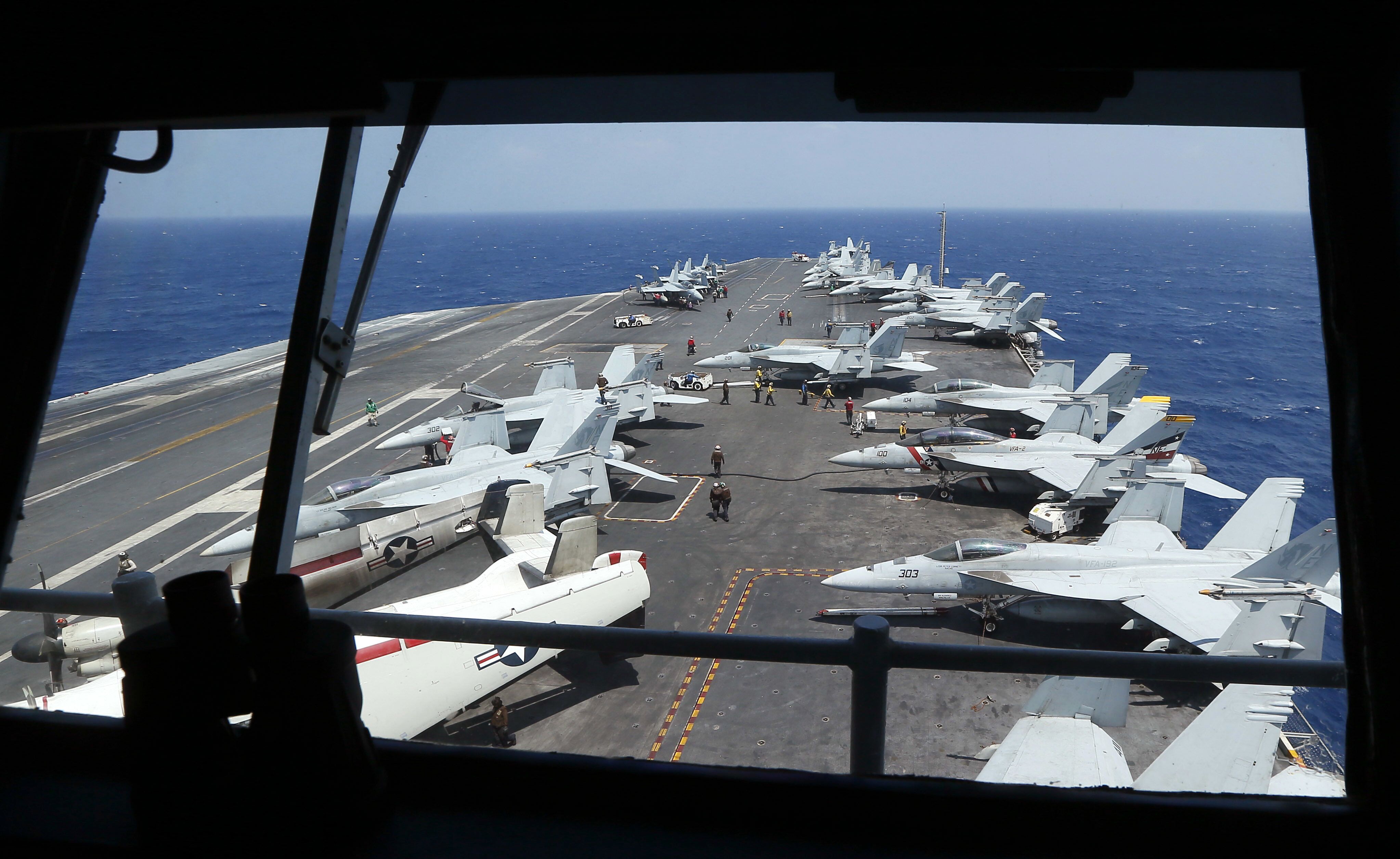 Like Obama, Trump Playing Into the Hands of Defense Contractors

Weinberg emphasized that "both Obama and Trump have foolishly married the subject matter of international trade to the issues of national security interests — through armament sales, the forward deployment of military assets and enhanced military-to-military 'power projection' exercises."

"It's not that Obama didn't successfully foster the sales and gifting of a multitude of weapon systems throughout the Indo-Asia-Pacific — it's just that Obama went about it in his typical smooth nonchalant manner," the founder of "Show Up! America" noted.

Obama's policies directly benefited the American defense contractors through his Pivot to Asia initiatives, the activist noted, adding that the president was de facto contributing to the escalation of an arms race, while ignoring the reactions of North Korea and China.

Believe it or not, Obama sold more weapon systems than any other president since WWII, the scholar pointed out.

'Trump Merely Went on to Restock the Swamp'

© AFP 2019 / ERIC PIERMONT
Soros, US NGOs Targeting Myanmar to Hinder China's Rise, Delay America's Decline – Author
In one of his previous interviews with Sputnik, Weinberg drew attention to the role of defense contractors in Obama's Export Council, the President's Council on Jobs and Competitiveness and the Business Roundtable. So, what about Trump?

"Donald Trump famously exclaimed that he will 'drain the swamp' once elected president," Weinberg recalled. "Similarly, Barack Obama, while campaigning for office stated "I'm in this race to tell the lobbyists in Washington that their days of setting the agenda are over. They have not funded my campaign. They will not work in my White House."

According to the scholar, it was obviously Obama's version of "drain the swamp" that turned out to be hot air: Trump's predecessor assigned CEOs from Boeing, GE and Lockheed Martin to serve on his trade and employment advisory councils while they simultaneously served on the Business Roundtable.

As for Trump, he appears to be as hypocritical as Obama, according to Weinberg.

The activist cited William D. Hartung, the director of the Arms and Security Project at the Center for International Policy, who noted wittily that Trump's "strong preference for populating his administration with former arms industry executives is so blatant that Senator John McCain recently pledged to oppose any new nominees with industry ties."

Hartung provides a long list of the US president's appointees with strong ties to American defense and intelligence contractors.

© REUTERS / Sean M. Castellano/Courtesy U.S. Navy
Bad Legacy: Trump's N Korea Policy 'Nothing but Continuation of Clinton-Obama Pivot to Asia'
The activist bemoaned the fact that the militarization aspects of Obama's Pivot to Asia policy remained neglected by the US mainstream media, adding that the trend is likely to continue.

"It is essential to note that the preponderance of advertising and sponsorships by the armament industry certainly curtails media coverage of weapon sales, proliferation issues and related hostilities," the activist highlighted.

He underscored that "to the same effect, many of those in Congress accept their campaign contributions and the promises of the Revolving Door — thus the American citizenry remain uninformed of perpetrated warmongering."

"The question which I and other Peace Movement activists are working diligently to raise — will Congress convene and deliberate to meet their Constitutional responsibilities, even though they have already collectively abdicated their authority; regarding Declarations of War, the War Powers Act and Authorization to Use Force (AUMF). Or have they succumb as well?" Weinberg asked rhetorically.