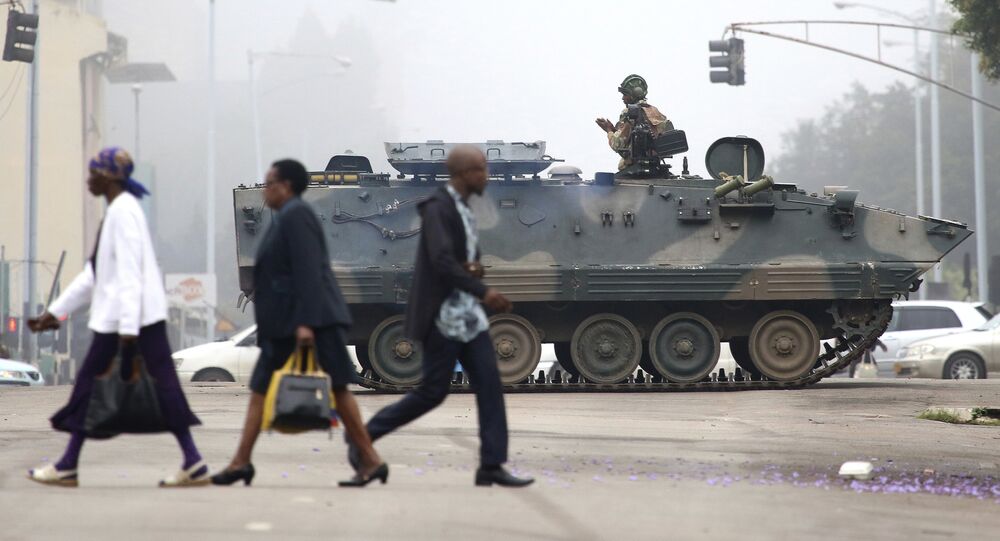 As media reports claim that Zimbabwe's army has gained control over the country's capital of Harare and detained Zimbabwe's president Robert Mugabe and his wife in what is being described as a coup, Sputnik discussed the issue with Dr. Ciara McCorley, a research fellow with the University of Sussex.

Sputnik: What is happening in Zimbabwe at the moment? Is this actually a coup? Or is it a voluntary agreement between Mr. Mugabe and opposition forces? What is actually going on there?

Sputnik: Why is the ruling party then denying the coup?

Ciara McCorley: I don't know whether they are. Actually, there are two Twitter accounts that claimed to be the ruling party. They seem to be the main source of information for the media, and neither one is confirmed. So it is likely that they are denying this in order to maintain some kind of peace and stability. The general that made statements this morning he indicated that there is concern that the current situation in the country […] might result in a violent conflict. So, I suppose that by denying that the coup is actually happening, the forces staying in power can try [to] maintain some form of stability, in the short run at least.

Sputnik: So, what do you think is going to happen now, Ciara? The army seems to have no ill will towards Mr. Mugabe himself. Do you think they will allow him to continue as president, or will he just be gently eased into retirement, replaced by Mr. Mnangagwa?

Ciara McCorley: I think, probably, [a] combination of both. Next year Zimbabwe has, they have scheduled [an] election, and kind of Zimbabwe generally likes elections. So I suspect what's going to happen is that Mr. Mugabe is going to remain in power as the… head, but Mr. Mnangagwa is going to be ruling in the rear, and that he is then going to be named Mr. Mugabe's successor.

Sputnik:What role does Mr. Mugabe's wife now play in the country's policies then? Can you tell us about the G40 faction that included Grace Mugabe and Finance Minister Ignatius Chombo? What is the G40 faction? How powerful has it become?