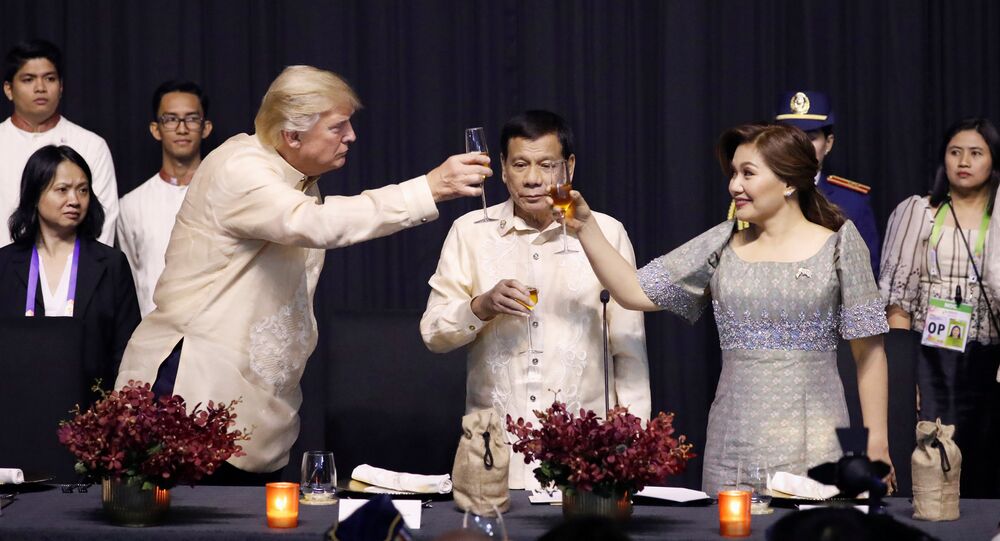 Donald Trump has concluded his trip to five Asian countries, including the Philippines. He reaffirmed the US commitment to building ties with Manila, saying he has a great relationship with Philippine leader Rodrigo Duterte. Sputnik discussed the issue with Jay Batongbacal, an associate professor at the University of the Philippines College of Law.

Sputnik: Following the tensions with the US, Duterte sought better ties with Russia and China, how will his new friendship with the US leader impact those relations?

Jay Batongbacal: Actually, I don’t see Trump’s visit as having a substantial impact on Duterte’s efforts to improve relations with China and Russia. On those fronts, nothing has actually changed. They are still improving far faster and better than [Manila’s relations] with the US. With the US, it is still stable, but there are improvements and changes with respect to China and Russia.

Sputnik: China’s dominant role in the South China Sea has been a hot topic among its Asian neighbors; however, this topic was barely touched upon during the ASEAN summit and Trump’s trip. Why?

Jay Batongbacal: It is clear that the Philippine government under President Duterte has taken a different track from that of his predecessor. They’re concentrated on improving relations with China, despite the fact that in recent years China has gained a lot of advantages over the Philippines, especially in the area of the South China Sea.

China now dominates the West Philippine Sea in terms of presence and operations, and the Philippine government has decided to seek cooperation with China. As for the disputed issues and the disputed areas, they are still there in  that the Philippines is overlooking them for now; it has set those differences aside for the time being.

Sputnik: Donald Trump has previously said that he could act as a mediator between China and the other nations in the South China Sea dispute. What is the possibility of this actually happening? How might China react to this kind of development?

Jay Batongbacal: One of the key issues for China has been the  US’ alleged role in the South China Sea dispute, and any attempt now of the US to play the role of a mediator or arbitrator will be met with resistance by China. As far as this condition is concerned, China will also be a bit cautious and suspicious of such a move. They wouldn’t see a productive role on the part of the United States, because it would only further complicate the discussions.

Sputnik: A recent poll from  Quinnipiac University of Connecticut showed that fewer Americans see North Korea as a threat following the President’s trip to Asia. How could you comment on that? Are we really going to see an easing of tensions between Washington and Pyongyang?

Jay Batongbacal: I don’t think so. That was simply a lull in the rhetoric and the two sides just went back to their corners for a while. It’s too early to tell whether this will actually lead to improvements in their relations. Given the trajectories of their relations, that’s just a lull and [tensions] are probably going to restart again soon.

Sputnik: Trump’s tour has now concluded. The president visited Japan, China and the Philippines amongst the nations there. What is your conclusion about this trip? Dou you think that things are now moving forward with regards to the relationship between the US and the Far East?

Jay Batongbacal: I think that there will be more issues that will arise given Trump’s attitude toward trade and his demands for what he calls fair trade deals with all of these countries.

As for his trip, he hardly presented a concrete Asia policy. He basically just presented himself, but people are still asking the same questions as they were asking before his visit.