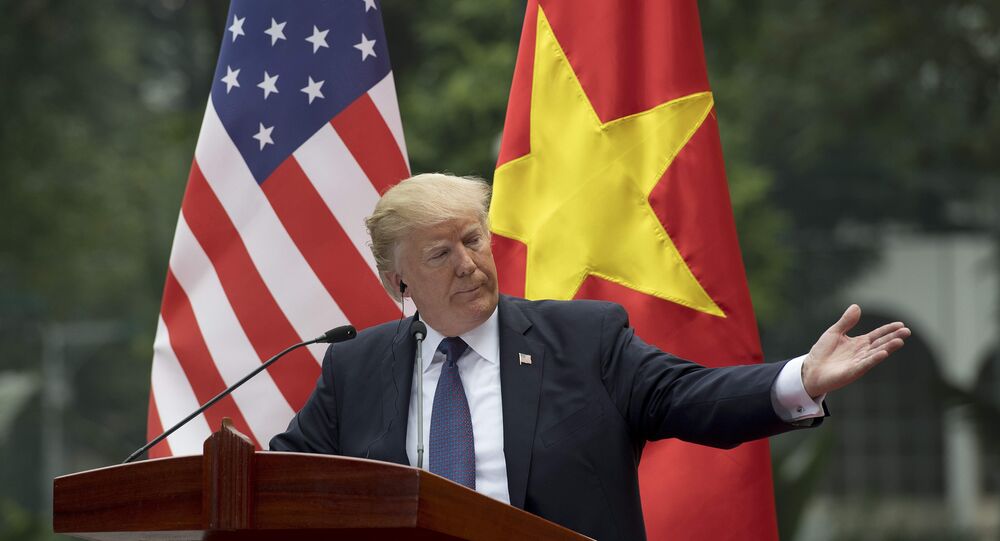 US Deprived of World Leadership Because of Its Trade Views – Analyst

Speaking at an APEC summit, US President Donald Trump stated, in particular, that Washington could no longer tolerate trade abuses and would insist on fair and equal policies. In an interview with Sputnik, Gary Hufbauer, senior fellow at the Peterson Institute for International Economics, harshly criticized Trump's speech.

Gary Hufbauer, former deputy assistant secretary for international trade and investment policy of the US Treasury and senior fellow at the Peterson Institute for International Economics, told Sputnik about his vision of President Trump's speech at the APEC summit in Vietnam late last week.

Sputnik: What is your take on what Trump has called trade abuse that put the US in unfavorable position? What can the current administration do to prevent other countries from — quote — taking advantage of the US?

Gary Hufbauer: Trump's view is preposterous. His basic view is that [trade-related] protection around your country, your high tariffs, quotas, whatever… is going to make you prosperous, and other countries may have more protection than the United States, so they're getting an advantage over the United States. This view has no economic support from any reputable analyst.

But that's why [Trump] thinks other countries are taking advantage of the US, because some of them have higher tariffs on certain products that the US does, so he thinks that [indicates] very poor negotiating skills by his predecessors and their trade ministers.

This is a view unique to President Trump and his small group of people who sign on for this kind of, let's say, anti-globalist, anti-trade rhetoric.

Sputnik: What do you make of Trump's preference for bilateral pacts over multilateral agreements?

Gary Hufbauer: This, again, is truly retrogressive. That was a US policy back in the 1920s, so almost a hundred years ago.

What you soon figure out is that if you try to do many bilateral pacts, it just tires you out. You have to go to Congress each time to get approval and then if one bilateral pact has concessions to the partner company which are bigger, and the partner in the next bilateral pact is unhappy and complains – this is no way to conduct trade policy.

If that's the way President Trump is going, I doubt that he will manage to complete very many pacts during his time as president, but it's a way of going slow on negotiations.

Sputnik: In his speech, Xi stressed the value of economic openness and multinational cooperation. Does it mean that China is ready to cooperate with the US on Trump's terms?

Gary Hufbauer: Not really. I truly appreciate President Xi Jinping's remarks both at APEC and earlier at Doha. He really sings the globalist tunes very well.

But in fact, China has quite a few restrictions on various types of trade, agriculture, digital… it's not very open to foreign investment into China, in many high tech industries. So these are practical restrictions, but at least President Xi is saying the right things, unlike President Trump.

Sputnik: Would you consider then President Xi's speech to be one of the highlights of the APEC summit?

Gary Hufbauer: Oh yes, it was one of the highlights, and I think many countries in Asia really applaud what President Xi is saying and hope that his actions will follow, and they like what he's saying far better than what President Trump was saying.

Sputnik: Xi pushed for improvement of multilateral trading system, which is seen as promotion of the Regional Comprehensive Economic Partnership. Taking into account that the US is not part of it, could it be an alternative to the Trans-Pacific Partnership (TPP)?

Gary Hufbauer: No, I think that the Regional Comprehensive Economic Partnership based on China (but the other big player is India) is complementing the TPP which has much stronger demands on liberalizing trade.

Sputnik: Given President Trump's decision to pull out of the TPP, what is the US' future in terms of trade?

Gary Hufbauer: Well the US is basically out of the 'party' for the time being while Trump is US President.

The US is not participating in the World Trade Organization; obviously it's out of the TPP and it is talking about leaving NAFTA. So it's a big withdrawal of the United States from the international trade order; the US was key to establishing this order after the Second World War.

It's an amazing situation when the US is being deprived of world leadership because of these views on trade. Unfortunately, that's the situation for the foreseeable three years.