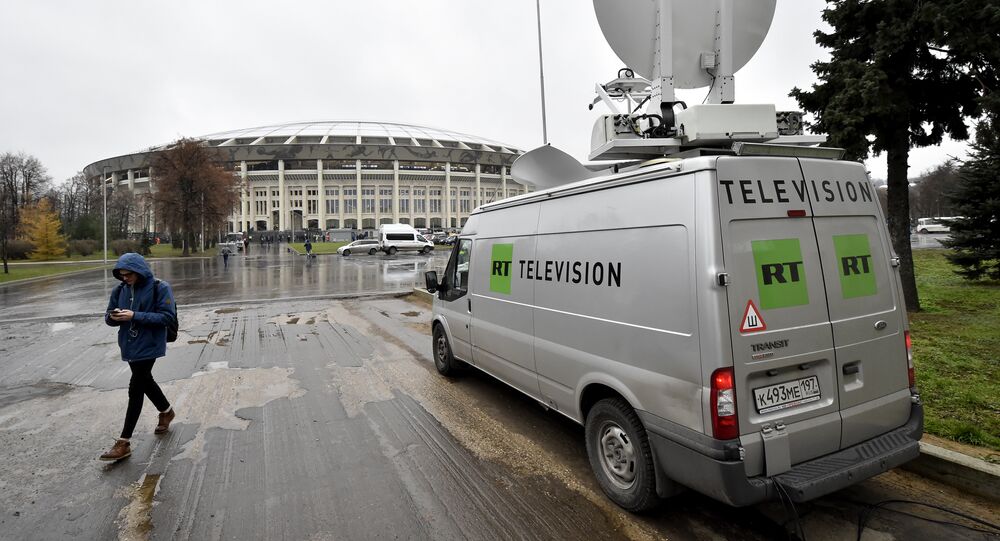 The US Department of Justice has demanded Russian broadcaster RT America to undergo registration in accordance with the US Foreign Agents Registration Act before November 13 – a move which Alex Beinstein, Republican candidate for Colorado's 3rd Congressional District in 2016, described to Radio Sputnik as a continuation of the Cold War policies.

Radio Sputnik: How did we get to this situation then?

Alex Beinstein: I think it’s just bad policy in Washington, continuing the Cold War policy even though it ended… Unless Russia attacked the United States, which I think it isn’t going to, we should get over this feeling of trying to control everything Russia does. I just think that’s a lot of ego, it’s a lot of this Anglo-American policy of trying to control countries around the world. And quite frankly, it’s just doesn’t work – just look at how the British Empire collapsed…
Turkey and Saudi Arabia are our allies, that’s fine, but there’s no moral high ground of saying ‘Saudi Arabia is our friends but you’re friends with Syria or Iran.’ I mean, it’s not like Saudi Arabia is morally superior to those two countries. It’s just that we have different interests and we have to find a way to reconcile these interests.

Radio Sputnik: How legal is this move from the point of the US Constitution?

© Sputnik / Konstantin Chalabov
Moscow Vows Prompt Response to US Demand on RT Registration Under FARA
Alex Beinstein: The act that this is happening under dates back to 1938 in which we tried to prevent the Nazis from gaining control of propaganda in the United States. But I just think it is a totally unfounded parallel. And this isn’t just America: I mean, Prince Charles of England was comparing Vladimir Putin to Nazis. And as somebody who comes from a family that personally lost people during the Holocaust, I just think that this rhetoric, this mentality is totally out of hand — Putin is certainly not Adolf Hitler. And it does to a certain extent abridge the freedom of speech. I mean, you can always say that national security overrides the freedom of speech and our greatest president, Abraham Lincoln, certainly curtailed newspapers during the Civil War, but that’s the point – we’re not at war. This is not war, and Russia does not attack the United States, we haven’t attacked Russia. So we have this mentality that we’re in the middle of the equivalent of a civil war or that we’re about to fight a war with the Nazis; I think it’s just totally out of control.

Radio Sputnik: How have we come to this point where such a piece of legislation can be used against a modern 21st century media outlet?

Alex Beinstein: It’s not so unusual in terms of the Constitution and invoking legislation that was passed 60-70 years before. I just think that the whole framework that Washington is operating at – to keep making Russia the devil and we’re the saints – I just think that it’s a lot grayer than that. And I think that it’s actually possible that we can be friends.