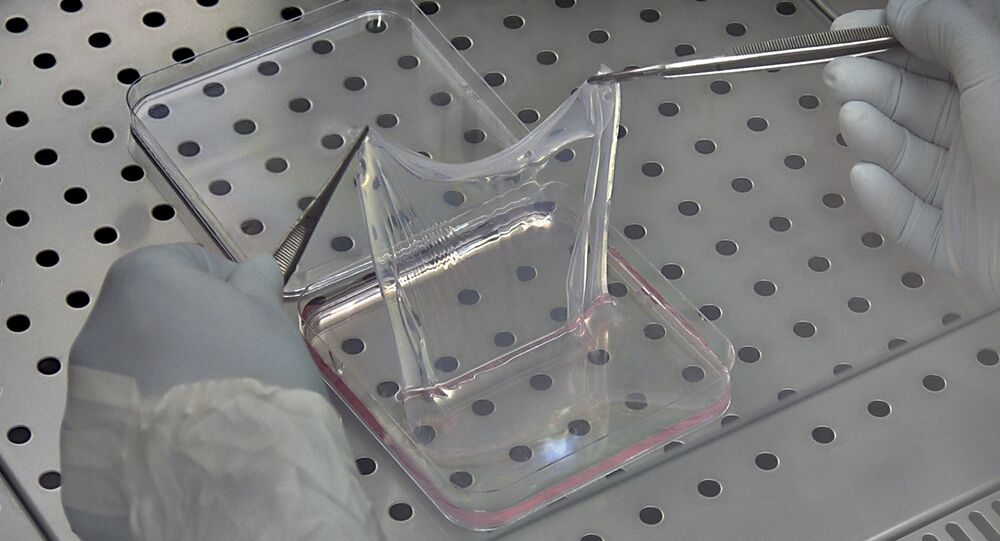 A Syria-born seven-year-old boy lost more than half of his skin due to a rare genetic disease. Maximilian Kueckelhaus, a physician at the Plastic Surgery Department of Ruhr-University Bochum, has told Sputnik about his international team's 'non-stop' work to grow genetically modified skin to ensure the boy's survival.

Sputnik: How did you manage to achieve these breakthrough results? How do you account for such phenomenal success?

Maximilian Kueckelhaus: It was tremendous collaboration in the first place that made it possible to save the life of a boy who'd lost approximately sixty percent of his body's surface area.

He was in a very bad condition and we, who are all experienced plastic surgeons, basically came to the point where there was no standard treatment available to help the child.

So we decided to approach Professor Michele De Luca [of the Center for Regenerative Medicine at the University of Modena and Reggio Emilia] in Italy. We asked him whether he would be willing to try his method of genetically engineering skin cells on a totally new scale that had never been done before, and he agreed.

The group efforts of surgeons, pediatricians and scientists who have been researching the subject their entire lives made this achievement possible.

Sputnik: How complex was the whole process of gene modification, the growing of skin and transplantation? What challenges did you face during the course of this particular procedure?

Maximilian Kueckelhaus: It was indeed a very challenging procedure. First, we had to procure a very small skin sample and deliver it to Professor Michele De Luca's laboratory in Italy so that they could extract skin stem cells from his biopsy and continue growing them.

They took various particles that contained information that was to be transferred to the stem cells' DNA. So they basically repaired the DNA of the stem cells so that the skin could be healthy once back on the boy.

After the repair took place, the entire skin of the boy was grown in the laboratory, as a result of continuous work and non-stop three days and nights to get this underway.

It took three to four weeks to grow human skin in the laboratory. Then this skin was transferred back to our operating team in  Bochum, Germany, where we immediately took that skin to transplant it on the boy.

Sputnik: What is the boy’s current state? Are you continuing to examine him and observe his condition?

Maximilian Kueckelhaus: He basically has a good quality of life and right now, he is not in the hospital. He is going back to school and he is able to play soccer and play with his friends. He for the first time, is leading a normal  life as a kid.

Sputnik: How soon this kind of treatment would be accessible to those suffering from stem diseases?

Maximilian Kueckelhaus: In this regard, it needs to be considered that there are many different forms of this disease, meaning that different effects on the DNA can be and each such effect needs a specific treatment.

READ MORE: Dementia: 'There is an Upside to Knowing Your Genetic Risk'

So in the end, more tests are needed to make it available to more patients. It is going to take a while before this would be in clinical standard procedure reality.

Sputnik: Is this technology applicable in other medical conditions like treating burns, among other things?

Maximilian Kueckelhaus: That's a very good point. Actually, we were so overwhelmed by the good quality of the skin that was built on the boy after the treatment that in the future, we want to look into trying to apply it to burns, because current standard treatment for burns is of pretty poor quality. You ought to spend a lifetime of a follow up, something that sometimes necessitates reconstructive surgery.