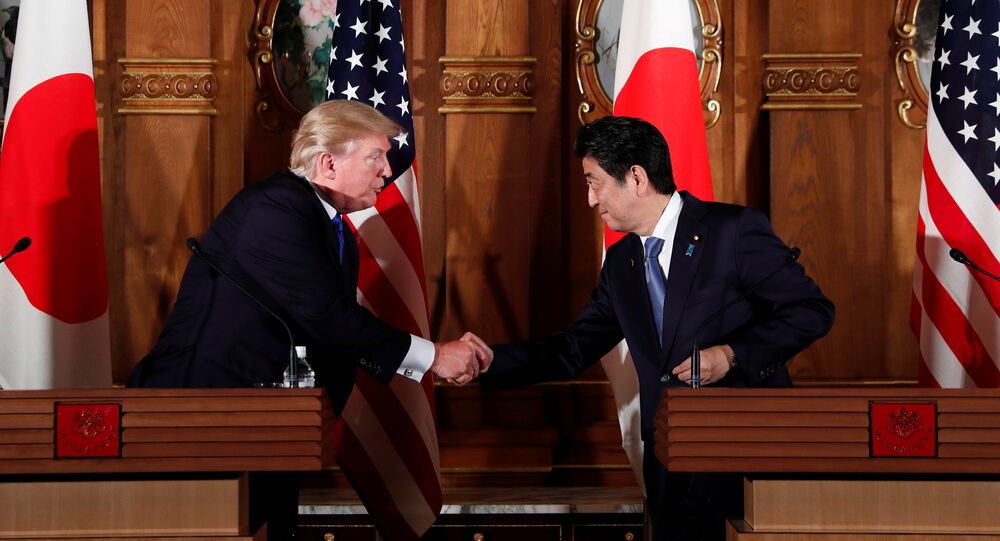 The arming of South Korea and Japan may upset the balance of power on the Korean Peninsula and beyond, analysts have told Sputnik, commenting on US President Donald Trump's plan to provide its regional allies with advanced weapons and expand America's missile defense capabilities under the pretext of the North Korean threat.

"China and Russia are seriously studying the [potential] consequences of the deployment of American strategic missile defense systems in the region at a political and military level," Korotchenko said. "There is speculation that the US is deliberately creating another launching area for its anti-missile defenses. They use the North Korea factor as a pretext to sell missile systems to South Korea and Japan."

US Expanding Missile Defenses Under Pretext of N Korean Threat

In the course of his 12-day Asian tour US President Donald Trump urged Tokyo and Seoul to buy more American weapons as protection against the Democratic People's Republic of Korea (DPRK).

"One of the things I think is very important is the prime minister [Shinzo Abe] is going to be purchasing massive amounts of military equipment, as he should. It's a lot of jobs for us and a lot of safety for Japan," Trump said at a joint press briefing in Tokyo on Monday, referring to Lockheed Martin's F-35A fighter jets and Raytheon's missile interceptors.

According to Korotchenko, Trump's policy is nothing less than the "continuation of an arms race." The delivery of US missile defense systems in Japan would have a serious impact on China's ability to contain nuclear deterrence. He believes that China may team up with Russia while mulling over countermeasures to the recent move made by the Trump administration.

The announcement of the US plans to deliver missile defense systems to Japan coincided with the completion of the deployment of 44 ground-based interceptor missiles on the anti-missile system at Fort Greeley in Alaska. Defense News reported that the most recent interceptor was implemented on November 2.

Liu Chao, a specialist on Korean Peninsula affairs at the Liaoning Academy of Social Sciences echoed Korotchenko's concerns, stressing that the agreements reached by Trump with his South Korean and Japanese counterparts may lead Asia into dangerous waters.

"First and foremost, it is necessary to keep in mind that military balance in the region is essential for ensuring peace and stability on the Korean Peninsula," Liu told Sputnik. "There is no doubt that the violation of this balance may easily result in conflicts. Regardless of this, the US is making every effort to sell weapons to South Korea."

According to the Chinese academic, Washington is using the North Korean issue to bolster military cooperation with South Korea. Liu warned that Seoul's military expansion supported by the US may trigger ramifications far beyond the Korean Peninsula. He was referring to the deployment of the Terminal High Altitude Area Defense (THAAD) system in South Korea.

© REUTERS / Issei Kato
Japan's Purchases of US Weapons May Lead to Nuclear Conflict - Russian MP
The arming of South Korea is in fact a very dangerous phenomenon, the academic highlighted; however, he believes that the militarization of Japan also poses significant danger to the region. The Chinese specialist recalled that during the Second World War, Japan "caused great damage to various Asian countries." He bemoaned the fact that it appears that Tokyo "is not going to recognize their aggression and committed atrocities."

The Japanese authorities are currently revising the country's Constitution seeking to abolish Article 9 that outlaws war as a means to settle international disputes involving the state, while the Japan Self-Defense Forces are being transformed into a regular army.

"In this sense, the danger posed by Japan far exceeds the potential threat from South Korea," the Chinese academic remarked. "The constant support and arming of Japan [by the US] is a very dangerous trend for the regional security."

Liu surmised that the US president is primarily guided by commercial interests: "[Trump] hopes that the sale of weapons will reduce the credit balance deficit in the US-South Korea trade, expand arms exports, and provide American arms dealers with new orders."

What Does Trump Want From China? What Does China Expect From Trump?