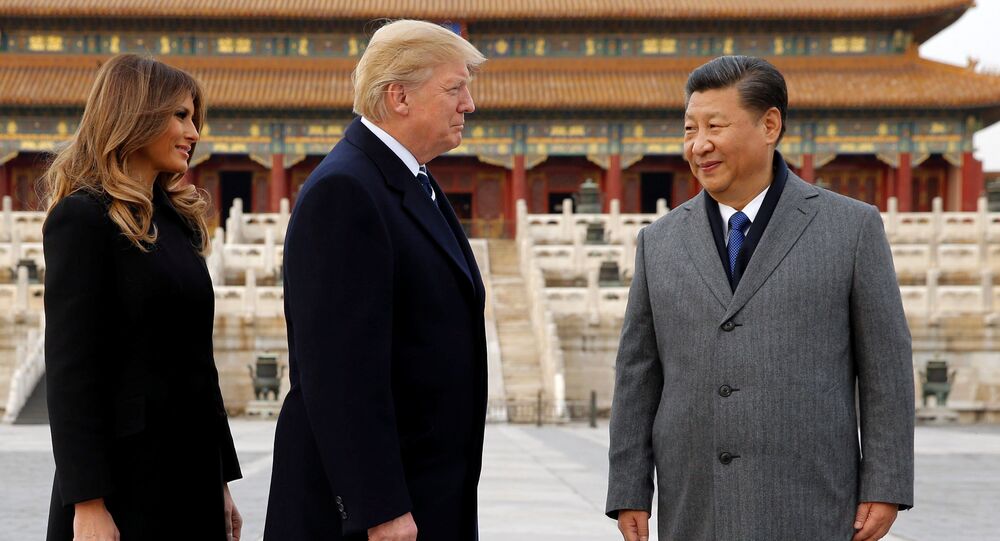 Author: ‘Trump Can't Seem to Decide' How He Wants to Approach China

On Wednesday, US President Donald Trump landed in China and was ceremoniously greeted with open arms as children waved Chinese flags alongside the Land of the Free's banner.

The visit, dubbed a "state visit plus" by Cui Tiankai, China's ambassador to the US, has been seen as a "highly choreographed blend of stagecraft and statecraft," according to NPR, but not everyone has been blinded by the lavish performances.

For Jude Woodward, the whole shindig is really about China wanting some type of "stability and calm" in its relations with the US. The issue here lies with 45.

​Speaking to Sputnik Radio's Loud & Clear, Woodward, the author of "The US vs China: Asia's New Cold War," says, "Trump can't seem to decide whether he's interested in a settled, stable relationship with China or if he wants to heat things up."

Woodward isn't alone in her opinion.

"I think Trump's approach to China has been difficult to discern," Ajit Singh, a political analyst, told show hosts Brian Becker and Walter Smolarek. "When he was first elected as president he accepted a phone call from the leader of Taiwan and it sort of was an aggressive act and insulting act towards China."

"It sort of just started on a rocky start," Singh said, later noting that Trump did go "back and acknowledge the One China Policy."

And then there's the matter of North Korea, which plays a major role in how Washington and Beijing work with one another.

Trump, who just Tuesday said there was still a chance to "make a deal" with North Korea, took a bit of a turn when, during a speech before the South Korean assembly, he offered "bellicose" remarks "demonizing North Korea."

Despite Trump's passioned call to arms, Singh says there isn't much of a chance that China would agree to sever all ties with the Pyongyang.

"I don't see China going along with any further sanctions, certainly not any unilateral sanctions that are simply demanded by the US and not supported by the broader international community," Singh said. "I think China is going to maintain a firmness on the idea that while it opposes the nuclear weapons developments that North Korea is pursuing, it doesn't want to demonize the country in the same way."

For Singh, there's no chance that Beijing would be willing to "engage in overly brutal or threatening sanctions towards the livelihood [of North Koreans] just because the US demands it."

When asked her opinion on Trump's call to all nations, Woodward didn't hold back.

"I personally think it's all hot air."