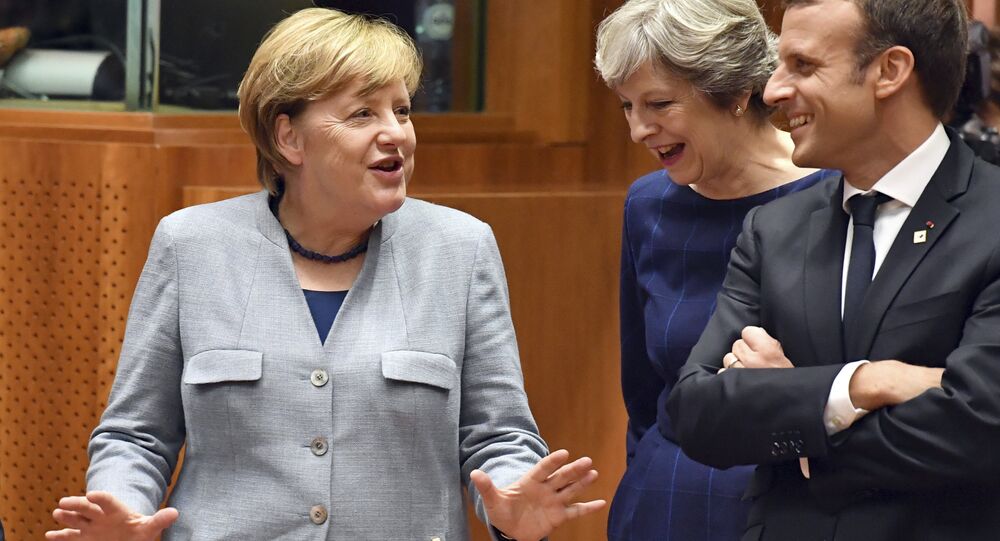 It is highly unlikely that Washington would manage to convince its European allies as well as Russia and China to renegotiate the Iran nuclear deal, RIA Novosti contributors Vladimir Ardaev and Igor Gashkov noted, adding that the unilateral reintroduction of the sanctions regime may leave the US further isolated.

Despite Washington's efforts to tear the Iran nuclear deal apart and reinforce the sanctions regime against Tehran, it is highly unlikely that the EU, Russia and China would follow in the US' footsteps, RIA Novosti contributors Vladimir Ardaev and Igor Gashkov wrote.

In mid-October the Trump administration designated Iran's Islamic Revolutionary Guard Corps (IRGC) a terrorist organization and authorized the Treasury Department to impose further restrictions against the country's security body. Additionally, the new US sanctions list contains three Iranian companies that contributed to the acquisition of ballistic missile technology, as well as seven organizations and eight individuals who participated in IRGC procurements.

"However, the imposition of new restrictions has not halted the influx of Western investment in the Iranian economy," the journalists highlighted. "Renault, Total, Siemens, Volkswagen, Airbus — all these European giants have already rushed to invest in Iran. The large Russian companies — Russian Railways, Zarubezhneft, Gazprom, Lukoil, Sinara Transport Machines (STM), and others keep abreast of the trend."

© AFP 2020 / ATTA KENARE
Why 'US Will Shoot Itself in the Foot' if Trump Goes Ahead With New Sanctions Against Iran
Speaking to Sputnik in mid-September, Ahmad Hadem Al-Melle, an adviser at the Industrial Development & Renovation Organization of Iran (IDRO) and the editor-in-chief of the Iranian business newspaper Eghtesad-е Bartar, pointed out that Tehran had inked a number of lucrative deals with foreign investors.

"Over the last two months, we have signed at least four major projects including two deals with French oil giant Total and carmaker Renault. There is also a deal with Russia's company Transmashholding on the manufacturing of railway cars. Finally, there is a railway construction project with a Chinese company. And more new projects are coming," Al-Melle said.

Following the implementation of the Joint Comprehensive Plan of Action (JCPOA) known as the Iran nuclear deal in 2016 foreign companies rushed to occupy new niches in the Iranian market.

While US President Donald Trump is openly demonstrating his discontent with the accord, Russia, China and the EU has already declared that the JCPOA doesn't need any amendments or improvements, while the International Atomic Energy Agency (IAEA) has repeatedly confirmed that Tehran complies with the terms of the agreement.

"European leaders — French President Emmanuel Macron, British Prime Minister Theresa May and German Chancellor Angela Merkel — called upon the US administration to consider the possible consequences of the abolishment of the nuclear deal for  global security. However, the White House continues to persist [with its stance]," the journalists noted, adding that the Trump administration risks finding itself in isolation in case it rips the deal up.

© AFP 2020 / THIERRY CHARLIER
EU Foreign Policy Chief Insists on Iran Nuclear Deal Implementation by All Parties, Including US
On Tuesday EU foreign policy chief Federica Mogherini called upon all parties to the JCPOA to abide by the agreements, as "renegotiating is not an option."

"If you reopen one part of it, the entire agreement is reopened and you will probably enter into another 12 years of negotiations, provided that you find the political will and the trust to reopen the negotiations," she said.

US policymakers are well aware of the possible implications of their decision; therefore they hope that America's European allies will team up with Washington and join the sanctions regime against Tehran.

However, according to Al-Melle, these hopes are nothing but wishful thinking: "The Europeans are not ready and do not want to incur losses, supporting the unilateral political interests of the United States. And the major contracts concluded recently with Iran by Western companies prove this. It is as difficult to force Europe to support Washington as to convince Russia to do the same."

Washington is therefore apparently pushing ahead with yet another plan, which envisages Iran's withdrawal from the deal as a response to the US' provocations.

© REUTERS / Marius Bosch
Iran Won't Leave Nuclear Deal First, But Preparing Itself for Every Scenario - Deputy FM
In August 2017 Iranian Deputy Foreign Minister Abbas Araghchi signaled that Tehran would withdraw from the JCPOA "as soon as it feels that the advantages of the nuclear deal fall behind its costs and disadvantages."

According to the journalists, one should keep in mind that the US sanctions regime, which was brought to an end due to the 2015 Iran nuclear accord, helped Tehran diversify its economy and develop the country's industrial and agrarian sectors.

While the reintroduction of sanctions is unlikely to break Iran, it may have serious ramifications for the country, the contributors warned. On the other hand, a new chill between Tehran and the West may result in China's strengthening its positions in the Middle Eastern region.

In July 2015, the European Union, Iran and the P5+1 group of nations comprising the United States, Russia, China, France and the United Kingdom plus Germany signed the so-called nuclear deal that stipulated a gradual lifting of sanctions imposed on Iran in exchange for guarantees of a peaceful Iranian atomic program.

The Man Who Broke the Ice Between US, Iran During Nuclear Talks (PHOTOS)