The UN has released their report on the sarin gas attack that took place in Khan Sheikhoun, Syria, in April 2017. The report has named the government of Syrian President Bashar al-Assad responsible for the strike.

The report, which was released by the UN and the Organization for the Prohibition of Chemical Weapons (OPCW), claimed that they were "confident" that the Syrian Air Force had unleashed the chemical attack against Khan Sheikhoun that killed around 100 people. Furthermore, the report alleged that the sarin gas used in the attack was drawn from stockpiles that the Syrian government had claimed had been destroyed as part of a 2013 deal with the US and Russia — a process the OPCW itself signed off on as having been completed that November.

Garland Nixon and Lee Stranahan of Sputnik Radio's Fault Lines spoke to Rick Sterling, a journalist and member of the Syria Solidarity Movement, an organization that supports the Syrian government. Sterling pointed out several inconsistencies in the UN/OPCW report, and argued that Assad lacked the motivation to conduct a chemical attack.

"I find the report that came out on October 26 very dubious," said Sterling. "They end up with a conclusion that they're confident that the Syrian Arab Republic is responsible for this sarin gas attack in the town of Khan Sheikhoun. If you just read one sentence in the report, which is what the mainstream media did, it says they're confident the Syrian government is responsible — but when you read the entire report, there's all sorts of discrepancies and caveats and conditions."

"For example, they document that there were actually victims of the attack appearing before the attack even happened. That's a pretty big contradiction. [Supposed] victims of the chemical attack in Khan Sheikhoun were showing up 125 kilometers north, 15 minutes after the event supposedly happened. The investigative team never went to the site — it's a standard practice that you've got to visit the scene of a crime to investigate the data from there, [but] the investigative team declined to go to the site, even though they were guaranteed their safety there by the Syrian and Russian governments."

"There's other contradictions that are there," he continued. "For example, there's no video. There's various scenes showing smoke rising from the four different sites and there is video that was shot from a neighboring hill, but there's no video actually showing planes over the site. The question of whether there were actually Syrian planes over the town at the appropriate time, it's obviously very important. The US and the Syrian Air Force itself say no, they did not fly over Khan Sheikhoun, they were carrying out an attack on on some neighboring villages."

"They claim they were never closer than 7 to 9 kilometers to Khan Sheikhoun. Even now, buried [in the report] was a US radar track which actually confirms the Syrian statement, because the US radar track itself doesn't show the Syrian jet being closer than five kilometers from the site. That in itself raises another question: how are they bombing Khan Sheikhoun with a gravity bomb when they're not even over the town?" 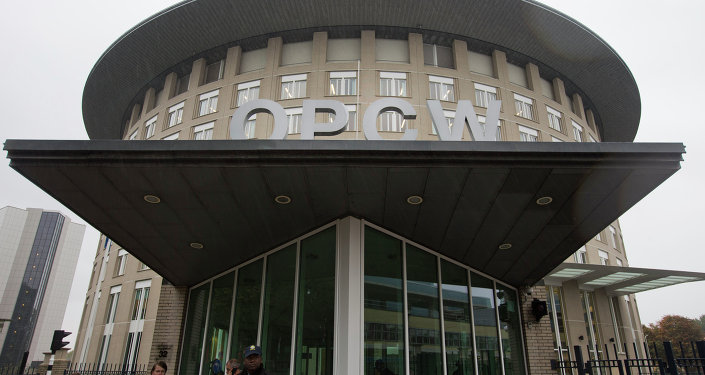 Sterling noted why the Syrian government had no reason to use chemical weapons, whereas the opposition had many reasons for the US to think the government had. "The three essentials of a crime are: means, opportunity, and motive. Well, what was the motive? The Syrian government has a motive to never use [chemical weapons], whereas the opposition has a huge motive: They're losing the conflict, the only way they can prevail and overthrow the government is if they can drag the US and NATO into it — which they've been trying to do, and they've explicitly called for for years now."

Stranahan discussed how back in 2013, then-US president Barack Obama drew a red line, promising to answer any chemical attacks performed by Assad's government with military strikes.

That policy continued under Trump, with the US military launching a missile strike against the Syrian government-controlled Shayrat air base just three days after the Khan Shaykhun chemical attack.

"You could kill 10,000 people with an old bowling trophy and not cross the red line," Nixon snarked. "But you can't kill one person with gas."

"There's all sorts of fishy and dubious things around this event that need a lot of further investigation," said Sterling. "Number one, you have to have a serious, objective, impartial team to go to the site and take more soil samples and get more evidence. Then they have to interview various people. [In the UN/OPCW report], the interviewees were basically selected on the basis of consulting with different groups that are associated with the insurgency. How objective is that going to be?"