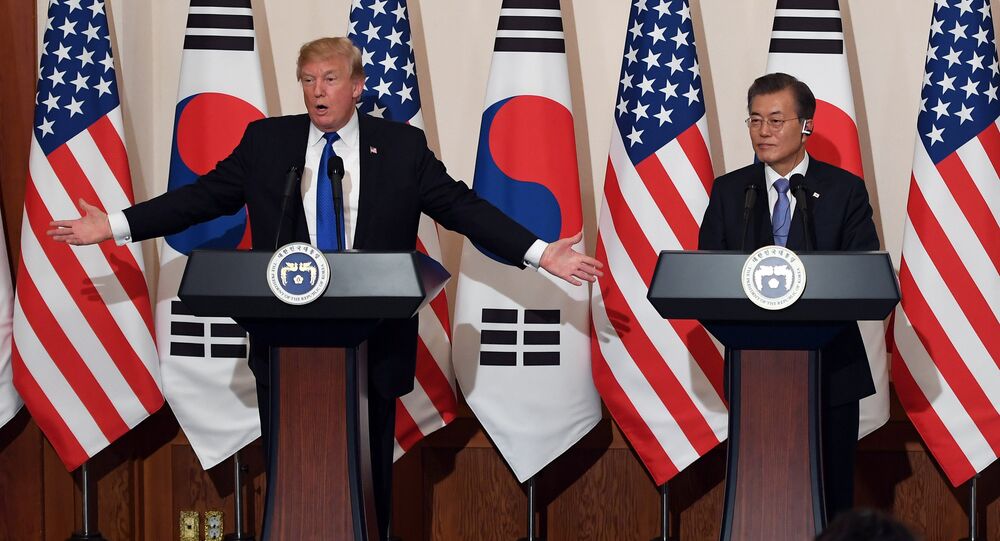 Speaking to reporters and officials in South Korea Tuesday, US President Donald Trump shocked many with his sudden softened stance on North Korea.

"It makes sense for North Korea to come to the table and make a deal that is good for the people of North Korea and for the world," Trump said at a news conference with South Korean President Moon Jae-in. "I do see certain movement."

Though the statement was a stark contrast to Trump's "fire and fury" comments made just a few months back, one expert says 45's remarks weren't something he just came up with on his own.

​Speaking to Sputnik Radio's Loud and Clear, Simone Chun, a fellow at the Korea Policy Institute, told hosts John Kiriakou and Walter Smolarek that Trump's "make a deal" remark was all about relieving anxiety on the Korean Peninsula.

"I think [Trump] is, in my analysis… just responding to President Moon, who really, really wants to… relieve some of the anxiety [felt by South Koreans]."

And Chun's not alone in this.

Mark Fitzpatrick, executive director for the International Institute for Strategic Studies, told AP that POTUS is simply reflecting the talks he's had with both Moon and Japanese Prime Minister Shinzo Abe.

"I expect he heard from both Prime Minister Abe and President Moon the need to give diplomacy a chance," Fitzpatrick said. "Now is a good time, during a pause in missile testing."

© REUTERS / Carlos Barria
Trump, Moon Agree to Enhanced Deployment of US Assets in S Korea to Counter N Korea Threat
But though Trump seemed to back down from his mocking "rocket man" rhetoric towards the North, even if just for a moment, Chun says this shouldn't be taken as a sign of a policy shift.

"I do not see any evidence of Trump shifting his earlier policy… there are still US aircraft carriers conducting joint military exercises," Chun told Kiriakou. "I do not see any developments that say otherwise."

When asked whether or not North Korean Supreme Leader Kim Jong-un would set off another missile or nuclear test while Trump is in the region, Chun gave a hard no, but acknowledged that the nation would likely resume testing in the near future.

Iran Ramps Up Oil Exports to South Korea, Much to Trump's Chagrin