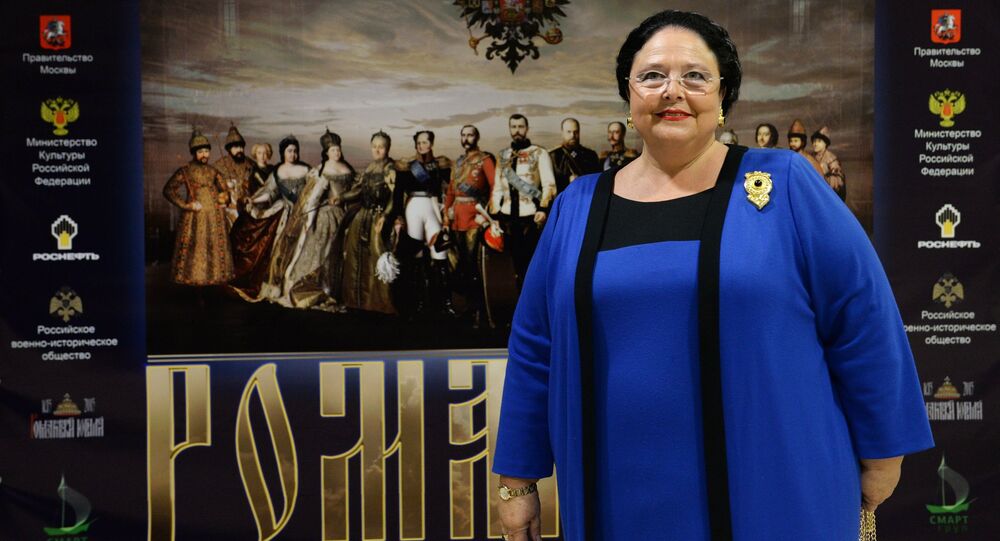 Sputnik has spoken with the claimant to the head of the former House of Romanov in the wake of the 100th anniversary of the October Revolution.

MOSCOW (Sputnik) — Maria Romanova, a descendant of Alexander II of Russia and a claimant to the headship of the former House of Romanov, has told Sputnik in an interview that the world should carefully learn the lessons of the 1917 revolution in Russia and make every effort in order to prevent the "egoism of the elite" which may lead to tragic events.

"The 1917 Revolution in Russia exerted an enormous influence on the life of our country and on all humanity. Thus it is not so strange that its history and the study of its causes and consequences should interest not only the citizens of Russia, but people all around the world … We can draw lessons from our past and strive not to repeat the mistakes of our ancestors … One of the fundamental reasons for any revolution is what we might call the egoism of the elite," duchess Maria said.

According to her, before the 1917 revolution, after which Emperor Nicholas II of Russia and his family were killed, Russia was not a backward or poor country, but grew and developed quite dynamically. The duchess noted that whereas many terrible events followed the revolution, the history of post-revolutionary Russia "cannot be depicted in only white or black tones."

"I consider aggressive state-sponsored atheism, totalitarianism, political terror, mass repression, and the destruction of a significant part of our cultural heritage to be completely unacceptable. At the same time, in the Soviet period there also were heroism, an enthusiasm to build new things, great achievements in science and the arts, and the resolution of a great many social and economic problems," she said.

Lessons to Learn in 21 Century

According to the grand duchess, the country is being restored following the upheavals in the 20th century, but warned against being careless.

"I see many positive changes taking place now in my country. Russia is gradually re-establishing its power after the upheavals of the 20th century. It has a strong and experienced leader who enjoys the confidence of the people. But even so, one can never sit back and relax and think that nothing bad will ever happen," Maria said.

"Russia under any form of government is a great power, and its treasure and its strength are its multi-national people. Russia will always have the inherent and indefeasible right to participate on an equal footing with other great powers in resolving international issues," she said.

© AP Photo / Ivan Sekretarev
Revisiting the October Revolution of 1917
The grand duchess further said that the House of Romanov was not participating in any political activities whatsoever out of principle, getting engaged only in the social sphere, stressing that the dynasty, whether it reigned or not, should unify the nation and be open to dialogue with all the countrymen.

When asked about the possibility of restoring the monarchy in Russia, Maria has replied that she and her son supported the current government and saw no conditions for restoration of the monarchy in the foreseeable future.

"However, as I often like to say, the Imperial House rejecting the idea of monarchy would be like the Church preaching atheism. We believe that the monarchical ideal of the State-Family can be useful to the people of Russia in the future. Monarchy is not in the slightest an obsolete form of government. It has spiritual foundations, many practical advantages, and significant potential … At the same time, we categorically reject the very thought of restoring the monarchy without the informed consent and expressed will of the people," she said.

Duchess Maria has explained that it would be pointless to restore the monarchy "as some kind of window dressing" or in a bid to consolidate political powers, adding that such discussions could take place only after the people fully grasped the fundamental nature of monarchy and weighed all its advantages and disadvantages.

In February-March 1917, the Russian Empire collapsed as Emperor Nicholas II abdicated, with the provisional government that replaced the old one being overthrown in October the same year by the Bolsheviks. Shortly after the revolution, the Russian Civil War broke out in 1918, claiming lives of estimated 7-12 million people and resulting into the Bolsheviks taking the power over the country. On July 16 of the same year, the Russian emperor and his family were executed, which was followed by a civil war, enforced collectivization and industrialization, mass repressions of the 1930s and the Great Patriotic War (1941-1945).