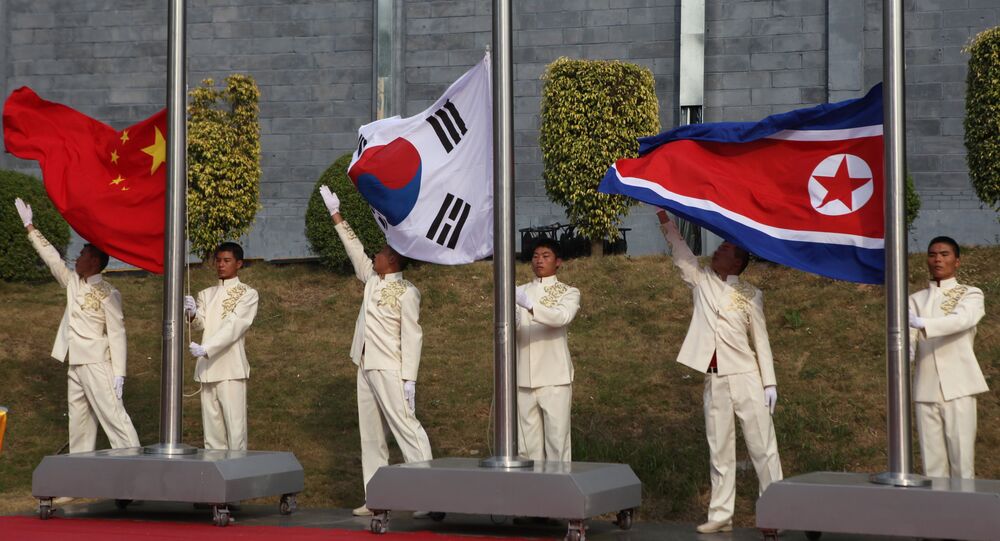 Ahead of President's Trump visits to South Korea and China, Seoul has sent a clear message to Washington that it firmly adheres to the idea that the North Korean crisis should be peacefully resolved, and this unites it with Beijing. Political analyst Alexander Vorontsov explains that this way Seoul tries to balance between China and the US.

"What implicitly unites Seoul and Beijing is their resolve to solve the North Korean crisis exclusively through peaceful means. With its recent statement, South Korea has sent an explicit message to its senior ally, the US," Alexander Vorontsov, the head of the Department for Korean and Mongolian Studies at the Institute of Oriental Studies of the Russia Academy of Sciences, told Sputnik China.

His comments come in the wake of the announcement released by the two countries last week that they insist on the peaceful resolution of the North's nuclear program.

Meanwhile, ahead of Donald Trump's voyage to Asia, the US Congressional Research Service has issued a report on military options for resolving Pyongyang's nuclear challenge and its potential risks.

Alexander Vorontsov, therefore, stressed that Seoul is concerned about the possible consequences of an aggressive scenario for its national security, and thus rushed to confirm jointly with Beijing its resolve to wrap up the conflict using solely diplomatic means.

The issue is likely to be discussed by South Korean President Moon Jae-in and Chinese President Xi Jinping when they meet on the sidelines of the summit of Asia-Pacific Economic Cooperation (APEC) countries in Vietnam on November 10-11.

The expert opined that by holding South Korea-China consultations at the highest level, Seoul is attempting to balance between the US and China in denuclearizing Pyongyang.

"President Moon Jae-in has repeatedly stated that it won't tolerate a forceful solution without the consent of his county. He warned the US that it should coordinate all of its actions with Seoul while Seoul advocates the peaceful resolution of the conflict," Alexander Vorontsov told Sputnik.

However, he added that Seoul has certain doubts that Washington will ask for its permission once the US decides to launch a military operation in the region. South Korea acknowledges that the US might act on its own, without any coordination and Seoul won't have any right to veto its decision.

Therefore South Koreans are trying to convey their concerns to the US through different means, including through their consultations with China.  Thus they are sending a message that their only solution is by using diplomatic means, Vorontsov surmised. This position coincided with that of China and it brings the two countries closer to each other.

President Trump is currently on his first stop of his Asian tour in Japan. He is then scheduled to visit Seoul on November 7 and the next day he will stop over in Beijing.