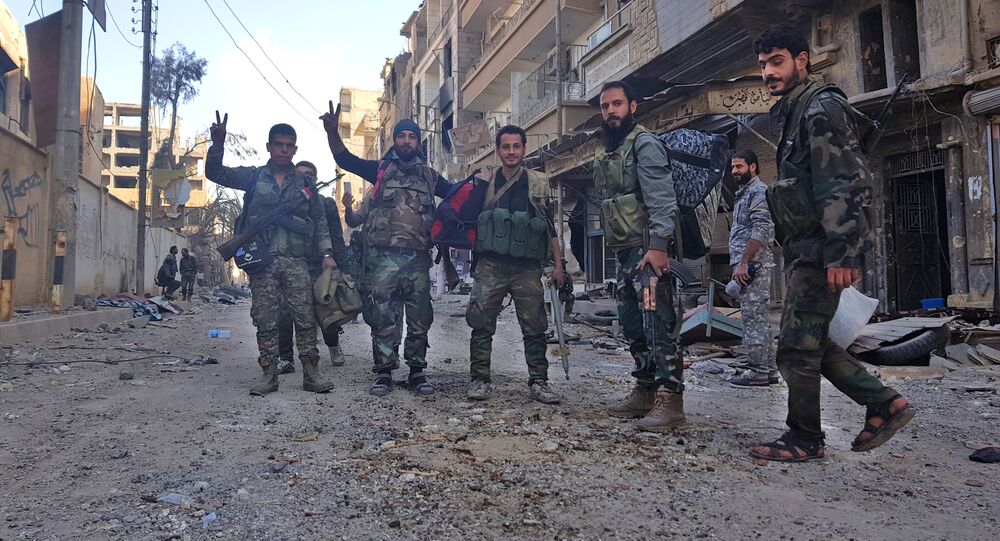 Liberation of Deir Ez-Zor Is 'Victory for the World' – Dr. Kamel Wazne

The liberation of Deir ez-Zor is a great achievement for the Syrian army, but the Syrian government still faces the challenge of bringing Raqqa under its control, Dr. Kamel Wazne of the Center of American Strategic Studies in Beirut told Radio Sputnik.

On Friday, the Syrian army announced it had retaken Deir ez-Zor from the Daesh terrorist group, depriving it of its last urban stronghold in Syria.

The achievement is a "victory not [only] for Syria but for the world," against "extremists who are a threat to peace and stability around the world,"Dr. Kamel Wazne, founder of the Center of American Strategic Studies in Beirut told Radio Sputnik.

"I think that the Iraqis, the Syrians, the Russians and the Iranians and everybody who fought this battle should feel very victorious because this battle was fought for a very good reason," the analyst said.

Defeat at Deir ez-Zor leaves Daesh without control of an urban area anywhere in the Middle East, although Wazne predicted that Daesh will try to relaunch its Islamist campaign in the region, but "they will give it a different label."

The analyst said that the US is a "destabilizing force" in Syria and "did not give Syrians the opportunity to build a settlement or dialogue between themselves."

He referred to Donald Trump's assertion that former President Barack Obama was the "founder" and former Secretary of State Hillary Clinton was the "co-founder" of Daesh.

"According to the President of the US, the Obama administration supported Daesh through countries in the Persian Gulf. So today, they wanted to have a piece of the equation through the Kurds inside Syria," Wazne said.

The SDF, with support from US special forces, launched its campaign against Daesh in Raqqa on November 5 2016. Last month, the SDF said it had started a final assault to liberate the last few neighborhoods of Raqqa after the evacuation of civilians and several hundred Daesh terrorists who had agreed to leave the city.

© AFP 2020 / STRINGER
WATCH Syrian Army Gain Control Over Daesh Weaponry in Deir ez-Zor (VIDEO)
Last Sunday, the SANA news agency cited an official source at the Syrian Foreign and Expatriates Ministry, who said that Damascus will consider Raqqa an occupied city until it comes under the control of the Syrian army.

"I would repeat what the Syrians are saying: 'Raqqa has not been liberated and it will be liberated when the Syrian army and the Syrian government have it under control and this is the message that the Americans have to take seriously," Wazne said.

"Syria deserves and should be given the right to rebuild and provide peace and security to its people. The Americans are supplying weapons to the Kurds. We saw what happened in [Iraqi] Kurdistan [with the independence referendum]. Having a country inside a country is not going to be allowed in Syria and I think it's better for the US to understand this fact and give the Syrian people the right to live peacefully."

On Friday, Dr. Lorenzo Trombetta, a Beirut-based scholar and journalist specialized in Syria and Lebanon, told Radio Sputnik that Daesh probably will not be able to return to power in urban areas but will continue to be a "very powerful ideological and political actor that will continue to have its consensus among populations, especially the deprived population of the Euphrates River between Syria and Iraq."

Like its predecessor al-Qaeda, Daesh will probably turn to terrorist attacks against urban civilian populations "in order to trigger polarization and division again among communities," he warned.

Trombetta, an independent consultant for The United Nations Office for the Coordination of Humanitarian Affairs recommended that over the longer term the international community and regional actors should try to "support local communities on a social-economic level in order to re-establish a link among Syrian people, re-establish trust among local governments, institutions and the social community scattered on the ground."

At Least 100 People Killed in Explosion in Deir Ez-Zor, Syria