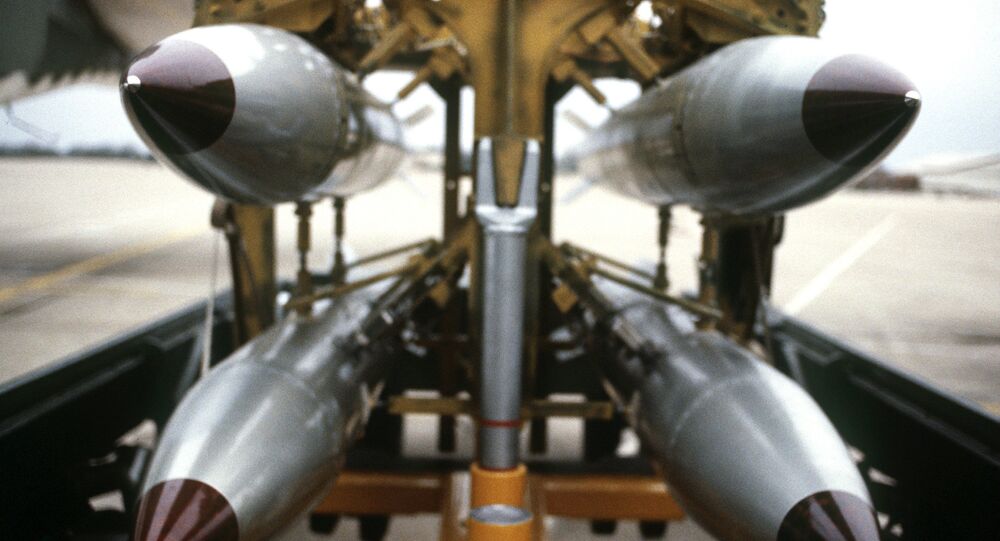 The Turkish parliament recently released a report claiming that there are a total of 150 US nuclear weapon elements in five NATO countries, including Turkey. Speaking to Sputnik, Turkish political analysts speculated on whether the presence of US nuclear weapons in Turkey is a threat to the country or a security measure.

Asked about why Turkey has turned into a country where nuclear weapons are deployed, nuclear energy expert Nursin Atesosglu Guney recalled that apart from Turkey,  there are nuclear weapons disbursed all around Europe.

Guney also recalled that before the outbreak of the Ukrainian crisis, when relations between NATO and Russia were good, there was a discussion about the withdrawal of nuclear weapons [from Europe] and the limitation of their use.

"But after the situation changed, the issue was put on the back burner. In the current situation of regional instability and increasing range of ballistic missiles, the presence of NATO nuclear weapons in Turkey must first of all be considered as a preventive and deterrent measure related to security," she said.

© Sputnik / Hikmet Durgun
'Small America' in Chaos: How Turkey's Incirlik Turns Into a Ghost Town
Guney also noted that various political events and tense ties between Ankara and Washington give rise to debates about the relevance of deploying nuclear weapons in Turkey.

She recalled in this context that "Turkey signed the Treaty on the Prohibition of Nuclear Weapons and banned the deployment of any nuclear weapons, except those of NATO, on its territory."

"There are clear principles regarding the use and maintenance of such weapons in conditions of war and in peace time. With this in mind, I believe that the deployment of nuclear weapon elements in Turkey should not cause concern in terms of security," she concluded.

In contrast, political analyst Mehmet Ali Guller told Sputnik that "since the Cold War, the United States has viewed Turkey as an important springboard for the implementation of its anti-Russian strategy."

Guller also mentioned Turkey's Incirlik Airbase which he said "plays an extremely important role for America because of its geographic and strategic location." Earlier, deputy head of Turkey's Vatan party Beyazyt Karatas said that 50 US B61-12 nuclear bombs were deployed at Incirlik.

"The airbase provides America with the possibility of conducting military intervention on a very wide territory from the Caucasus, the Black Sea and the Eastern Mediterranean to the Persian Gulf. Namely, the nuclear weapons deployed here pose a serious threat to both Turkey and its neighbors," Guller said.

He stressed that the US and NATO perceive nuclear weapons at Incirlik not as an instrument to protect Turkey from an external threat.

"Rather, it is viewed as an auxiliary tool for conducting an attack on another country in accordance with the regional interests of the United States.The most vivid confirmation of this is the fact that the bombs placed in Incirlik, if necessary, are allowed to drop from F-15 and F-16 US fighters, while Turkish F-16 warplanes are banned from doing so," he added.

Guller also stressed the need to withdraw US nuclear weapons from Turkey and close NATO military bases in the country.

© AP Photo / Burhan Ozbilici
Disrespect for 'Red Lines': Why Turkey is US 'Ally But Not a Partner'
He urged Ankara to first cancel an agreement on the use of Incirlik, signed between the Turkish government and the US on July 20, 2014, and then close the Kurecik airbase and put an end to the US military presence in the city of Diyarbakir.

According to Guller, the US military presence in Turkey contradicts Ankara's strategic interests and the closure of US bases would save Turkey from political blackmail, to which it is regularly exposed, and will allow Ankara to build a more balanced and independent relationship with the US.

"In addition, the closure of the US bases will help Ankara ensure the "peace in the country, peace in relations with neighbors" principle as well as add to the development of Turkey's own military potential," he concluded.

Unresolvable Contradictions: How the US and Turkey Parted Ways