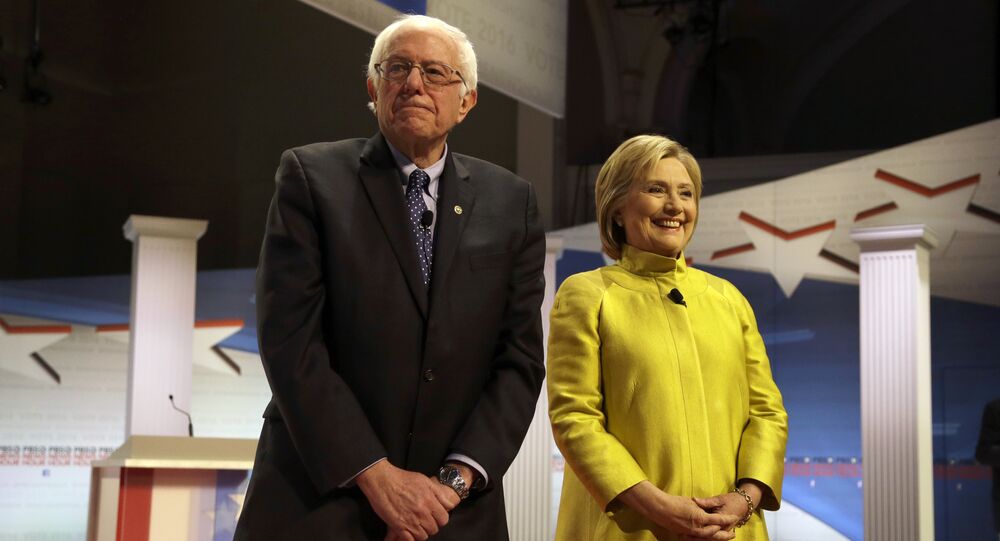 ‘A Complete and Total Sewer’: Brazile’s DNC Bombshell Only the Beginning

Donna Brazile, the chair of the Democratic National Committee (DNC) from July 2016 to February 2017, has alleged massive corruption within the supposedly impartial DNC during the 2016 election as the party was under the financial control of then-candidate Hillary Clinton.

In an excerpt of her upcoming book published as an article on Politico titled, "Inside Hillary Clinton's Secret Takeover of the DNC," Brazile offers yet more evidence that the pervasive sense that the DNC had rigged the Democratic primary contest against Sen. Bernie Sanders (I-VT) in favor of Clinton was, in fact, correct.

While the primaries were ongoing, Brazile alleged, the Clinton campaign was paying to keep the lights on at the DNC, which was $24 million in debt. The DNC, which is supposed to be neutral and not support any one candidate during the primary, was under Clinton's control the entire time as a result, she said.

Garland Nixon and Lee Stranahan of Fault Lines on Sputnik Radio spoke with Michael Krieger, a financial analyst turned social activist and populist blogger. Krieger was excited about the Brazile article, which he considered the first shot in an unprecedented political upheaval in the US.

"Donna Brazile is a known liar," Krieger began. "She participated in this rigging of the primary, we know that, but at the end of the day, Donna Brazile is a minion. She's a nobody. She's just like anyone else, she wants to do well in her job… she [wants] a nice lifestyle."

"We need to take a big picture [approach]… [Brazile has] not harmed America in massive ways, she's harmed American in minor ways… I care about people who have harmed America in massive ways. The Clintons are one of the best examples we have in this country. The proof is right here: this family, Bill and Hillary, made $150 million. Doing what? Being career politicians. How do you do that? The only way you can make $150 million by being politicians is if your system is a complete sewer — and it is it is a complete and total sewer, and they are one of the primary beneficiaries."

"Also that's not clean money, that's all dirty money again," said Krieger. "People that go to Washington to care about the public don't make $150 million, it's Ethics 101. [The Clintons] belong to a class of people: they're Democrats, they're Republicans, they're Wall Street CEOs, they're pharma CEOS, they're lobbyists like [John and Tony] Podesta and [Paul] Manafort. They're defense contractors, they're intelligence peddlers. It's the top people at these places who are ruining the country — and they know what they're doing, too."

"Brazile is getting a paycheck. The Clintons are giving out the paychecks. What I want to do is [get] American citizens to stop being distracted, stopping being divided and look at the big 'Super Predators,' " Krieger urged, ironically referencing an infamous description of African-American youth by Hillary Clinton. "Look at the people who are given the paychecks and the minions who are keeping this corrupt system alive, because it needs to die, and the sooner it dies, the better… so I'm happy with what Donna Brazile did. I forgive her for her past sins, because this was a huge positive and I want to see a lot more of it."

Krieger also praised Rep. Tulsi Gabbard (D-HI), who came out in support of Brazile's allegations and condemned her own party, calling for significant party reform to limit the power of superdelegates and, in her words, "take back our party — a party that belongs to the people — and fight for a new path forward that is open, transparent, accountable, inclusive, and that actually strengthens our democracy."

Gabbard's words were echoed by Sen Elizabeth Warren (D-MA) who agreed that the primary was "rigged" in favor of Clinton. To Krieger, Gabbard "is about a million times braver. Let's not forget what she did during the primary: she quit her position [as vice-chair of the DNC] to support Bernie. Now — I think she's very savvy politician; I think she saw the writing on the wall super early — but it still took a ton of courage. She could have been wrong, and if she was wrong, her career is finished."

"Warren, on the other hand, who aligned perfectly with Bernie Sanders on almost every issue, didn't say a peep during the primary. She was a total coward." And she wound up supporting Clinton in the end, too.

Nixon and Stranahan compared Brazile's allegations, and their reinforcement by Gabbard and Warren, to the current sexual assault scandal embroiling Hollywood personalities like Harvey Weinstein and Kevin Spacey. All it takes is one relatively low-level individual to come forward to open the floodgates of a major scandal.

"That's a great comparison," said Krieger."I want to inspire people, from your average person who can't make a difference really to people who really can. I want people to say, 'look, we're in a very special time'… we live in revolutionary times."

But unlike the Hollywood scandal, Brazile's allegations have not been extensively covered by mainstream media outlets. Quite the opposite. "That's how you know when something's big," said Krieger "When I see MSNBC or CNN or the New York Times ignoring a story that anyone with two brain cells to rub together can see the gigantic political implications of… that is such a sign that we're winning. That is such a sign that the status quo has no confidence, that they're terrified, that they're weak."

"The cat's out of the bag. In a world where we're talking to each other across the world and we've got billions of people that can communicate and say, 'what is wrong with these elitists? They're complete lunatics, and we don't need them.' They can't win… and so the only question for me is what comes next? I think the next five years will be the most chaotic five years that any of us alive will ever live."