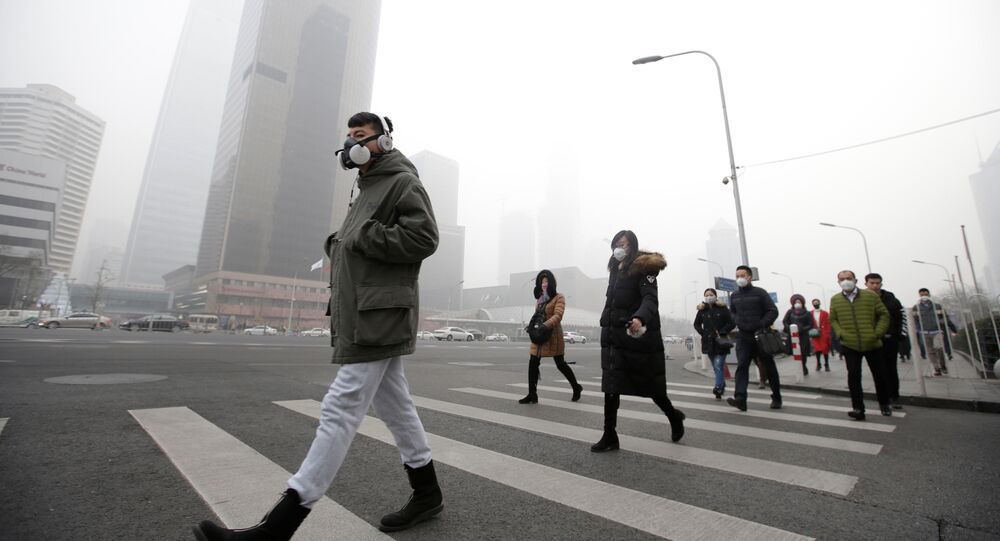 Amid the US withdrawal from the Paris climate deal, China has decided to take the lead in attempts to cut greenhouse gas emissions. Sputnik has spoken with Lauri Myllyvirta, a researcher for Greenpeace in Beijing, and Glen Peters, a senior researcher at a climate and environmental research institute in Oslo, on China's efforts.

MOSCOW (Sputnik), Tommy Yang — Domestic concerns, such as resolving serious air pollution problems, are the real driving forces behind China’s strong push in efforts to combat climate change, in addition to the opportunity to take the moral high ground on this global issue after the US administration decided to withdraw from the Paris accord, experts told Sputnik.

After US President Donald Trump in June announced his decision to withdraw from the Paris Agreement, a deal reached by 196 countries in 2015 to set national targets to cut greenhouse gas emissions, China has tried to take the lead in global negotiations under the UN Framework Convention on Climate Change (UNFCCC).

© Sputnik / Alexander Liskin
Tribal Leader Explains How Climate Change May Make Alaska’s Village Disappear
Xie Zhenhua, China’s top climate negotiator, who heads the National Development and Reform Commission, has recently reiterated Beijing’s commitment to emission reduction and the nation seeks to play an important role at the upcoming 2017 UN Climate Change Conference, known as COP 23, which is expected to kick off next week in Bonn, Germany.

"China actively participated in the global climate management process and made ‘historic, fundamental, important and outstanding’ contributions to the Paris accord… When it comes to dealing with climate change, we need to take the role of an important participant, contributor and leader in the whole process. The Chinese delegation will make our contribution to the success of the Bonn [climate change] conference," Xie said at a press conference on China’s latest climate change policies.

However, China’s strong commitment in global efforts to combat climate change in recent years stands in sharp contrast to its previous position on the issue a few years ago, when Chinese officials including Xie largely viewed the theory of climate change as a Western plot to slow the nation’s economic growth.

© Photo : Pixabay
Quinault Tribe in US Preparing Carbon Tax Proposal to Address Climate Change
At an environmental ministers conference in New Delhi, India in 2010, Xie suggested there was still "a lot of debate" among scientists on whether human activities caused global warming and one theory suggested that global warming is just an inevitable trend of the natural cycle, adding that "we need to keep an open mind."

"Air pollution is a huge domestic concern. When the urban middle class became vocal on this issue, the government has to address their concerns to prove its legitimacy. China will really have to change its energy mix and economic structure to bring back blue sky and resolve the air pollution problem. There’s a lot of synergy between solving air pollution and combating climate change," Lauri Myllyvirta, a researcher for Greenpeace in Beijing, told Sputnik.

Despite heavy smog frequently shrouding most cities in north China, including the capital city of Beijing, for many years amid the nation’s explosive economic growth, the air quality index from Chinese authorities never accurately represented how serious the air pollution was until 2012, when official figures started to include the readings of PM 2.5, a key air pollutant that could cause serious health issues.

The decision by Chinese authorities to publish PM 2.5 figures on air quality came after enormous public pressure, following the US Embassy in Beijing releasing PM 2.5 readings that indicated the city’s air quality was way worse than the official air quality index released by the government at the time.

When the public became more aware of how serious the air pollution air pollution is, their expectations also grew, Myllyvirta explained.

"The public expectation increased dramatically in recent years. A few years ago, the air quality index went above 500. People really started to pay attention and got really angry," he said.

In November 2010, US Embassy in Beijing said through its Twitter account BeijingAir that the city’s air quality was "Crazy Bad," beyond the maximum air quality index of 500. Despite Twitter being blocked in China at the time, the post on Beijing’s air pollution caused a lot of discussion on Chinese social media website Weibo. Afterwards, discussion on Beijing’s air quality became a sensitive topic on Chinese social media and posts including air quality readings from the US Embassy were swiftly deleted by Chinese censors.

Numerous posts appeared on Weibo detailing the serious health implications from prolonged exposure to PM 2.5 and Chinese environmental officials were forced to answer why the official air quality index did not include PM 2.5 readings.

According to Myllyvirta, the Greenpeace researcher, the changes in public expectations on air quality in China.

"It’s all about the interplay between air pollution levels and public expectation. There are a much bigger number of people who are focused on air quality, on their health and on the education of their children, than just getting by day to day, thanks to social media," he said.

Under massive pressure from the public, local authorities in Beijing started to include PM 2.5 readings in the daily air quality index starting from January 2012. In the revised national "Air Quality Standard" released in March 2012, the average concentration of PM 2.5 was added and required to be released for different Chinese cities.

"Part of the reason is that it [air pollution] is visible and it comes and goes. If every day is equally gray, I don’t think it would be such a big issue. When you have blue sky days, then you have days when the air pollution is really serious, it becomes so dramatic and catches people’s attention," Myllyvirta said.

In preparation for the Asia-Pacific Economic Cooperation (APEC) summit in Beijing in November 2014, Chinese authorities suspended production at thousands of factories in various provinces in northern China to ensure world leaders can enjoy clean air during their visit to the Chinese capital. The efforts paid off and blue skies returned to Beijing during the two-day summit.

Pixabay
Climate Change Denial Debunked: Venezuela First Country to Lose All Glaciers
During his opening keynote speech at the APEC summit, Chinese President Xi Jinping vowed to keep the "APEC Blue" in the city. "The first thing I did these days when I woke up was to check the air quality in Beijing and hoped the smog could be less severe to make the guests who traveled from afar more comfortable… Some people say, the blue sky in Beijing is APEC Blue. It’s beautiful, but short-lived. It will be gone soon. I believe APEC Blue can stay through our continued efforts," he said.

In the months leading up to the military parade to commemorate the 70th anniversary of the end of WWII in 2015, Chinese authorities took similar measures to reduce pollution emission by shutting down thousands of factories in north China. Blue skies returned to Beijing during the military parade held on Sep 3, 2015 and became known as the "military parade blue."

"You can say ultimately it’s all in self-interests. There’s an element that the Chinese economy was restricting anyway. The very long period of high growth and high investment has come to an end. As the consequence of the restructuring, you would expect emissions growth to at least slow down. The timing may have just been right. Hypothetically, if Paris [accord] was [signed] in 2005, when China was experiencing high growth rate, I don’t think Beijing would have signed the agreement. The context that China’s growth has changed allowed it to be more proactive," Glen Peters, a senior researcher at Cicero, a climate and environmental research institute in Oslo, told Sputnik.

The Oslo-based expert believes that the void left by Trump’s decision to withdraw from the Paris accord presented a great opportunity for China.

"With the latest decisions by the Trump Administration, it’s an opportunity for China to assert itself on the global stage. With the economic restructuring taking place anyway, it’s an easy area for China to assert itself. In 2009 at the ‘failed’ Copenhagen Climate Conference, a lot of the blame was put on China. Now China has found an opportunity where it can play a leadership role. Now [former US President Barack] Obama is gone, and Trump is in. Under the new context, it’s a void that China can fill. Maybe it’s quite some luck for China to have this opportunity," Peters said.

The expert has concluded that he does not think China would deliberately slow down its economic growth and restructure its economy solely over air pollution concerns.