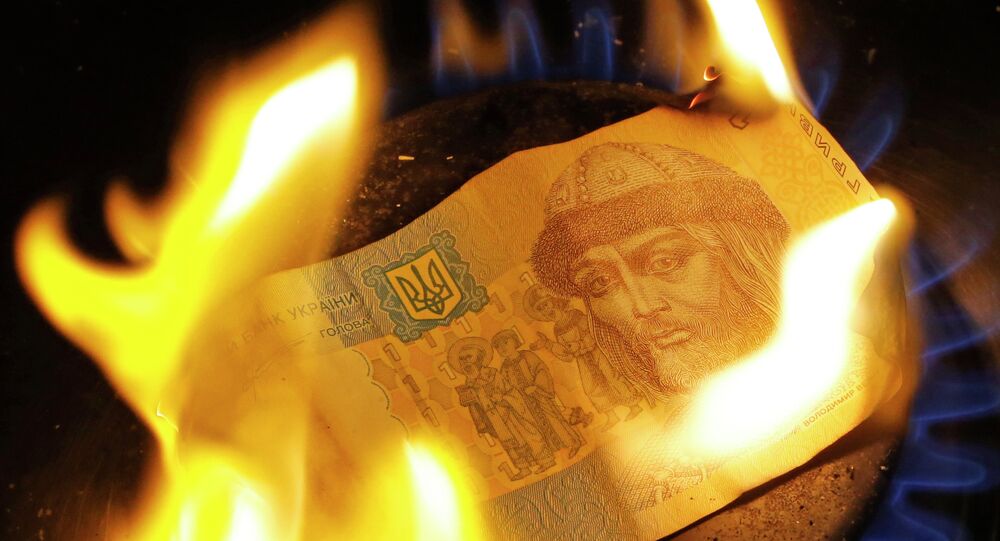 Last week, German President Frank-Walter Steinmeier paid a working visit to Moscow in a bid to improve chilly Russian-German relations. Shortly after, Ukrainian Foreign Minister Pavlo Klimkin went to Berlin, where he told German journalists that he was concerned with the German public's loss of interest in events in Ukraine.

Also last week, Andriy Kobolev, chairman of the board at Naftogaz, Ukraine's state oil and gas company, complained to the media that when the first stage of the Russian-Turkish Turkish Stream pipeline project comes online starting next year, Ukraine will stand to lose at least half a billion, or about a quarter, of its total revenues from the transit of Russian gas to Europe. It will lose double that by late 2019, when the second stage of the program comes on line, the official added.

© Sputnik / Michael Klimentyev
Putin at Presser With Steinmeier: Moscow-Berlin Relations Improving (VIDEO)
In an analysis piece for Russia's RIA Novosti, Ukrainian-Russian journalist Rostislav Ishchenko, a leading expert on Ukrainian politics, pointed out that in his interview, Kobolev made no mention of Nord Stream II, even though "disrupting that project has become almost a national ideal for Kiev."

"In an attempt to persuade Germany to abandon the project, Kiev enlisted the support of Poland, the Baltic states and, most importantly, the United States. Washington actively pressed its German partners, even threatening sanctions against companies involved with financing Nord Stream II." Washington's motivation was two-fold, Ishchenko noted, attempting to prop up Kiev's cash-poor budget, while simultaneously pushing Gazprom out of Europe, with more costly but 'politically appropriate' American shale gas coming in to fill the void.

But the effort to stop Nord Stream II has effectively stalled, its opponents last hurrah coming as Danish politicians attempted to block the pipeline's construction through its territorial waters. "We can say that the Danish incident was a consolation prize for those who lost the fight to block Nord Stream II," Ishchenko quipped. "They did not solve their problem, but received some moral satisfaction."

"And since Nord Stream II is expected to be operational by 2019, Berlin has found itself needing to inform its Ukrainian client about a radically changing geopolitical reality which, starting in 2020, will have no place for Ukraine," the analyst added. Of course, Berlin has found the need to tell Kiev that it supports reforms, and that it has not changed its position on Crimea and Donbass, even if it simultaneously participates in Russian gas pipeline projects which bypass Ukraine.

© AFP 2021 / Steffi Loos
German 'Transatlantic Manifesto' Wants to Fix US Relations at Expense of Russia
"To this end, Klimkin was summoned to Berlin where, according to the Ukrainian Foreign Ministry, he held a series of meetings with politicians and lawmakers from the emerging coalition, discussed the Donbass settlement, the implementation of the Minsk agreements, Crimea and the need for more reforms. No joint statements were issued, no documents were signed."

"And if we translate the jargon of the press release into normal speech…Klimkin was told that Kiev will have to carry out reforms at its own expense," Ishchenko noted. "The West will not only not give Ukraine any more loans, but over the next two years will deprive Kiev of its gas transit revenues. The Nord Stream II issue has been closed, and Kiev is being told not to start a scandal with Berlin."

"As a consolation, Berlin guarantees that it will not change its position on Crimea's Russian status (which doesn't really give Kiev anything, since Siemens turbines make their way to the peninsula anyway) or on Donbass. Berlin will continue to support anti-Russian sanctions. However, this too is only a question of Kiev's moral satisfaction. It's not that sanctions do not cause Russia any pain at all, but a policy of import substitution has allowed Moscow to derive more benefits from the restrictions than costs."

© AP Photo / Petr David Josek
'Czech Donald Trump' Could End Up Smashing EU's Anti-Russia Consensus
What's more, the analyst stressed, given that the EU's sanctions policy is based on a consensus, albeit one enforced by Berlin, in the long term, all Germany needs to do is "fail to convince" one or two three of its junior partners to fall in line, and the EU-wide sanctions will crumble.

"In this respect, Steinmeier's visit to Moscow, is symbolic," Ishchenko stressed. "On the one hand, the federal presidency is a purely decorative post in the German political system, a sinecure for honored political retirees. On the other, Steinmeier unexpectedly told the press that he intended not to limit himself to a ceremonial conversation with Putin, but to focus on the German position on Crimea, the Donbass and sanctions."

And while the German politician stuck to Berlin's position on all these issues, the important thing, as President Putin hinted at in his joint press conference with Steinmeier, is that relations move forward. This means cooperating on issues of real importance, such as Nord Stream II.

"Judging by Andriy Kobolev's despair, and his preference not to mention Nord Stream II at all, and to merely express the timid hope that maybe the construction of the Turkish Stream's second stage will be held up, Kiev understands what's happening. The West will continue to utter its mantras at Kiev, until it finds a reason to back out on its obligations. But from now on there won't be any more money. Not even a little," Ishchenko concluded.